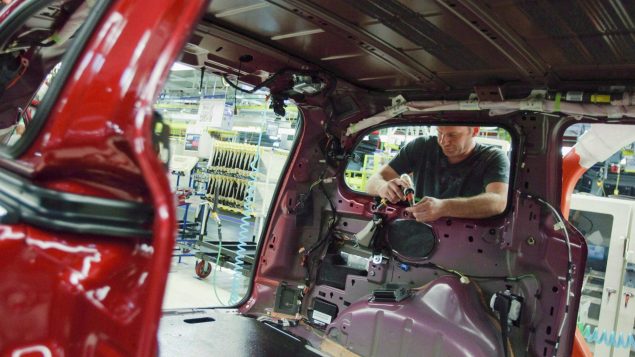 The Canadian economy expanded at an annual pace of 1.3 per cent in the 3rd quarter of 2019, Statistics Canada reported Friday. A worker installs parts on the production line at Chrysler's plant, in Windsor, Ont., in a Jan. 18, 2011, file photo. (Geoff Robins/THE CANADIAN PRESS)

The pace of Canada’s economic growth slowed down in the third quarter but the impact of escalating global trade tensions was not as bad as was feared, economists say.

Statistics Canada says the country’s real gross domestic product grew at an annualized rate of 1.3 per cent in the three-month period.

In its report released Friday, the federal data agency also revised its reading for the second quarter to show growth at an annualized rate of 3.5 per cent, compared with its initial estimate of 3.7 per cent released in August.

Economists had expected annualized growth of 1.2 per cent in the third quarter, according to financial markets data firm Refinitiv.

“All-in-all, the data should do little to change the narrative that, while concerns about the economic outlook remain, current economic conditions still look relatively resilient in Canada,” Nathan Janzen, senior economist at RBC Economics, wrote in a note to clients.

“The GDP increase was in line with the Bank of Canada’s forecast in October, and the central bank will likely take comfort in the increase in business investment as a sign that activity will continue to hold up relatively well in the near-term.”

The Bank of Canada is making an interest rate announcement next week, and is widely expected to keep the key rate target on hold.