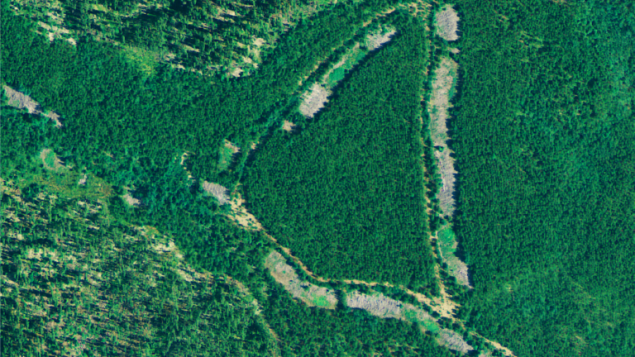 This aerial photo shows "logging scars" left by roadbeds and landings 16 years after logging was done. These landings are formed by heavy machinery to haul trees to side of road. In decades after clearcut logging these areas remain barren. (Trevor Hesselink/Wildlands League)

Ontario loses about 21,700 hectares of forests – the equivalent of about 40,000 football fields – every year due to logging roads and landings that scar the province’s boreal forests, according to a report by a Canadian conservation group released Wednesday.

The report by Wildlands League claims this is seven times greater than the reported deforestation rate by forestry for all of Canada despite the fact that only 17 per cent of Canada’s logging takes place in Ontario.

Trevor Hesselink, the lead author of the study entitled Boreal Logging Scars, estimates that 650,000 hectares of productive forest have been lost due to logging infrastructure over the past 30 years in Ontario alone. 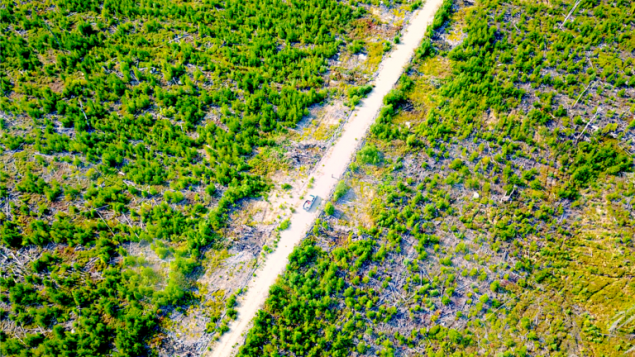 Drone photo taken in 2018 shows site 130 near Lac Seul forest clearcut. The area was logged in 2008 and subjected to roadside slash-burning. The photo demonstrates the contrast between landings, which aren’t renewing and the surrounding clearcut, which is renewing. (Trevor Hesselink/Wildlands League)

The loss of so much boreal forest, which is a natural carbon sink, represents the equivalent of 16.5 million tonnes of lost carbon sequestration over the last three decades, the report claims. That’s how much carbon dioxide would have been taken up by growing trees had roads and landings not displaced them.

That number is projected to grow to 41 million tonnes by 2030, which is more than a year of emissions from all the passenger vehicles in Canada, the report says.

“We’ve been told over and over that Canada has a near zero deforestation rate,” Sumner said. “But it wasn’t what we were seeing in the bush. Canada does indeed have a deforestation problem and one we need to fix.”

Hesselink, who is also the director of policy and research for Wildlands League, said Canada’s logging deforestation problem has been ignored, due to an optimistic belief that all affected areas will grow back.

However, the study reveals that in the first three decades after clearcut logging, roads and landings typically remain essentially barren and dominated by grasses and low shrubs. 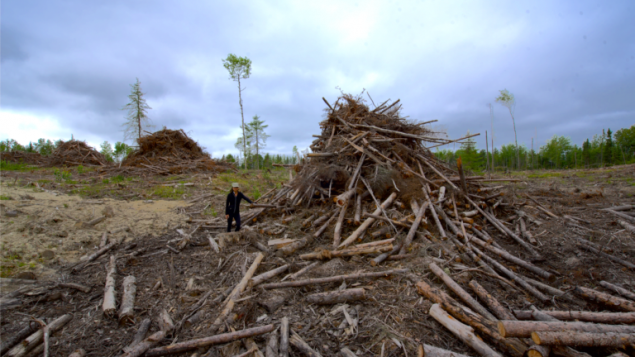 The report by Wildlands League says the logging practice of dragging trees to roadside and leaving waste piles contributes to a growing legacy of logging scarred areas. Research assistant Victoria Yeh is standing by a pile. (Trevor Hesselink/Wildlands League)

Hesselink said the main culprit is a deeply wasteful practice known as full-tree harvesting (FTH), where the entire tree (trunk, limbs and branches) are dragged from the stump to the roadside.

Logging machinery then strips merchantable logs of branches and tops, leaving behind undesired species. This practice accumulates large volumes of tree waste over large spaces, inhibiting renewal of the forest.

FTH is the dominant approach to clearcut logging in Ontario and is also used in the British Columbia interior, across Alberta and the prairie provinces, and in about half of the logging in Quebec, the report says.

This raises additional concerns that the Ontario case study may be the tip of the iceberg when it comes to the revealing the true scale of deforestation by forestry in Canada, Wildlands League says. 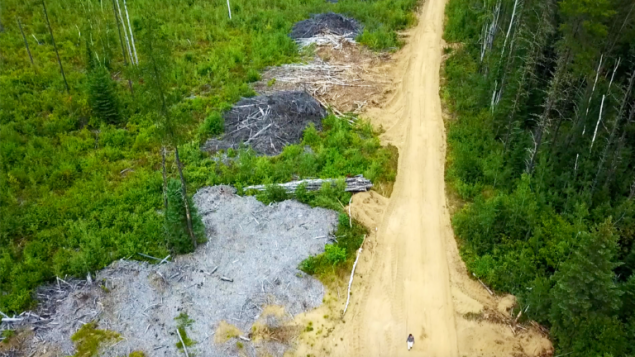 The conservation group is asking the federal government to revise its rules for monitoring deforestation to address the substantial risks and impacts from logging roads and landings in the boreal forest.

Wildlands League also wants Ottawa to review and remedy what it claims is “its current under-reporting of the carbon impacts from Canadian logging on the international stage.”

“Given these findings, it’s clear to me forestry should no longer be permitted to open up the last remaining intact boreal forests in Canada in a climate crisis,” Sumner said.

Officials at the Department of Natural Resources Canada said Canada is a world leader in sustainable forest management.

“Our strong system of forest laws, monitoring and enforcement ensures sustainable forest management practices across the country,” said Nicole Green, a spokesperson for Natural Resources Canada (NRCan). “Ninety-four percent of Canada’s forests are publicly-owned, and under current laws, harvested trees must be regenerated.”

While responsibility for forests falls under provincial and territorial jurisdiction, NRCan research aims to ensure the long-term sustainability of Canada’s forests and to promote environmentally sound forest management practices, she said.

“NRCan is responsible for monitoring the impacts of human activity on forest carbon – including deforestation or permanent removal of forest – for inclusion in reports on Canada’s annual greenhouse gas inventory,” Green said. “This monitoring uses the best available science, data and carbon modelling in accordance with international rules and guidance for greenhouse gas estimation and reporting.”

The federal will continue to work with industry and provinces and territories to protect and sustainably manage Canada’s forests, she added. 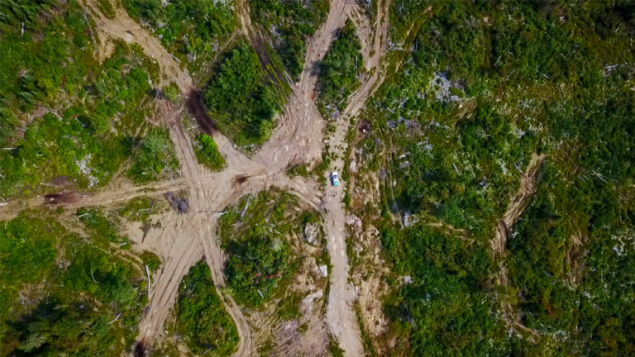 “Our robust regulatory framework ensures the long-term health of our forests while supporting economic opportunity for Ontarians,” Jolanta Kowalski, a spokesperson for the Ontario Ministry of Natural Resources and Forestry said in a statement.

Contrary to the claims made by the Wildlands League report, Ontario does consider the loss of productive land in its forest management practices, Kowalski said.

The Forest Management Planning Manual requires planning teams to develop strategies for managing roads and unproductive land, she said. Planning teams have to monitor and report on the progress towards completing the recovery of productive land such as slash piles, chipper piles, landings, and decommissioned roads, Kowalski said.

Between 2009-2013, 731,638 hectares were assessed for regeneration status, with 91 per cent determined to be free to grow, Kowalski said. Areas that are not free to grow are reassessed in future years, she added.

“In addition to the forest industry, it’s important to remember the public access road network in Crown forests are used by mining companies, tourism operators, Indigenous communities and others,” Kowalski said. “These roads are also a key component of the rural infrastructure for emergency preparedness and response.”