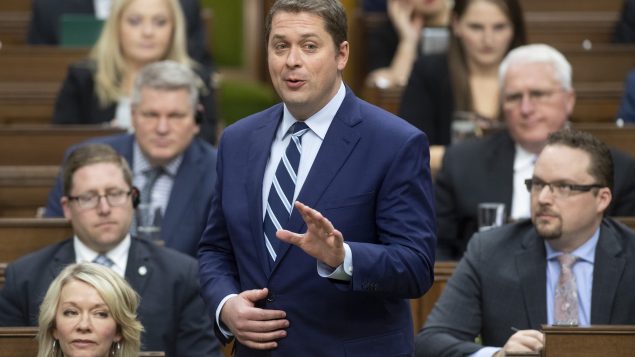 Leader of the Opposition Andrew Scheer rises during Question Period in the House of Commons Tuesday Dec. 10, 2019 in Ottawa. Scheer is stepping down as a Conservative leader. (Adrian Wyld/THE CANADIAN PRESS)

Andrew Scheer announced Thursday that he will be stepping down as the leader of the federal Conservative Party and asked the party to begin the process of organizing a leadership election.

Speaking in the House of Commons, Scheer said he will remain at the helm of the party until it elects a new leader and “Canada’s next prime minister.”

“Serving as leader of the party that I love so much has been the opportunity and challenge of the lifetime,” Scheer said. “This was not a decision I came to lightly. This was a decision I came to after many long hard conversations with friends and family over the past two months since the election.”

Scheer had faced a growing chorus of voices from within the party calling on him to resign following the party’s disappointing performance in the Oct. 21 election, in which the Conservatives failed to unseat the Liberals despite several scandals plaguing the Trudeau government.

While the Tories won the popular vote and increased their seat count, they finished with 121 seats compared to 157 for the Liberals, who now lead a minority government.

Many within the Conservative party felt Scheer’s social conservative views – he is a devout Catholic, who in the past has opposed the use of term marriage to describe gay marriage, and is opposed to abortions – handicapped the Tory campaign.

Scheer, a father of five, said the election campaign and the fallout from the Conservative loss was hard on his family.

“This party, this movement needs someone who can get 100 per cent to the efforts and after some conversations with my kids, my loved ones, I felt it was time to put my family first,” Scheer said, calling on the Conservatives to remain united.

Scheer, 40, who was first elected to the House of Commons at age 25, will continue to represent his Regina-Qu’Appelle constituency in Saskatchewan “for the near future.” He was elected the Conservative party leader in 2017, following a hard-fought and crowded leadership competition.

Scheer said he will support his successor “100 per cent.”