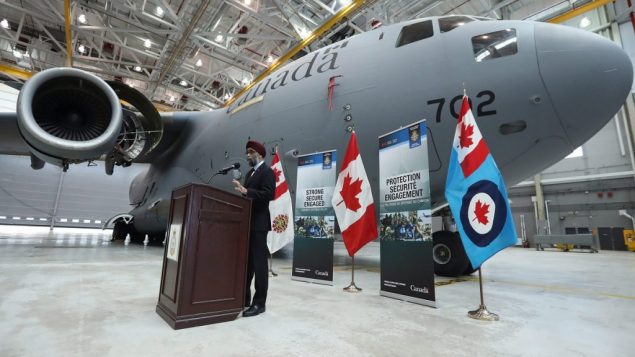 Beefing up Canada’s surveillance, defence and rapid-response capabilities in the Arctic are among the top priorities outlined by Prime Minister Justin Trudeau in the marching orders handed to Defence Minister Harjit Sajjan on Friday.

Sajjan’s mandate letter – a set of priorities outlined by the prime minister for each of his cabinet ministers – also instructs Sajjan to work with the U.S. to modernize the binational North American Aerospace Defence Command (NORAD), sign a contract to acquire a fleet of new fighter jets, and revitalize the Royal Canadian Navy.

The mandate letter calls on Sajjan to work in concert with the foreign affairs minister and the northern affairs minister “to strengthen continental defence, protect Canada’s rights and sovereignty and demonstrate international leadership with respect to the navigation of Arctic waters.”

Adam MacDonald, deputy director at the Centre for the Study of Security and Development at Dalhousie University in Halifax, said the mention of “international leadership” in the mandate letter indicates that the Liberal government is interested in more than just building capabilities but also shaping the institutional environment, in maintaining regional “rules-based” order.

Just like in the recently released Arctic and Northern Policy Framework, the mandate letter does not overtly mention specific actors, threats, and challenges but points to a growing concern about the region’s geopolitical importance, MacDonald said.

“I think where the word ‘international’ within this statement is important,” MacDonald said.

Canada wants to be involved in formulating maritime rules and regulations in the region but this does not involve change in Ottawa’s position with regard to its sovereignty over the Northwest Passage, MacDonald added.

“It would be a reasonable continuation of past attempts at internationalizing Canada’s legally-based strategy on the issue,” said Timothy Choi, a maritime strategy expert at the University of Calgary’s Centre for Military, Security and Strategic Studies. “Good to see it’s not just the material elements at play.”

The mandate letter also calls on Sajjan to work with the minister of public services and procurement “to bring forward analyses and options for the creation of Defence Procurement Canada,” a dedicated defence procurement agency to streamline National Defence and Canadian Coast Guard procurement projects, something that successive governments have tried but failed to do.