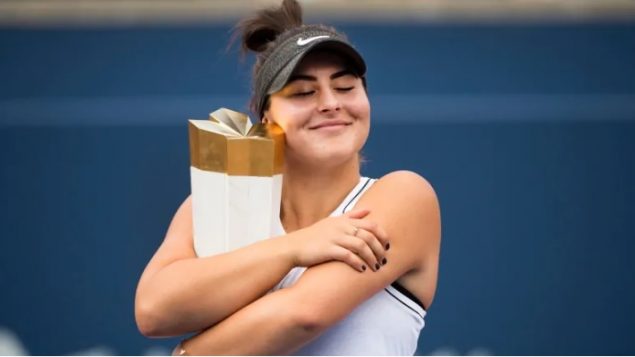 Bianca Andreescu hugs the winner's trophy after defeating American Serena Williams during the Rogers Cup final in August. Andreescu went on to defeat Williams in the U.S. Open Final, but an injury to her left knee has forced her to withdraw from next week's Australian Open. (Nathan Denette/Canadian Press)

There will be no back-to-back grand slam titles for Bianca Andreescu, at least this time around.

Andreescu, who caught the fancy of both Canada and the tennis world last summer when she won the Rogers Cup in Toronto and the U.S. Open in New York, defeating Serena Williams on each occasion, has dropped out of the Australian Open.

Play in the main draw begins a week from today and Andreescu, the world No. 6, and–by many accounts–Canada’s athlete of the year in 2019, announced Saturday she would not be playing.

Hey guys, just wanted to give you a little update on my knee rehab after I got injured at the WTA finals in Shenzhen. My rehab is going well, I feel better and stronger every day but after discussing it with my team and following the recommendation of the doctors, the Australian

Open is unfortunately too soon in my rehab process and I sadly will not be able to play in it this year. It was a very tough decision to make as I love to play in Melbourne but I have to respect the recuperation plan for my knee and body. I can’t wait to come back to Aus soon x

She is still recovering from an injury to her left knee she suffered during the WTA finals in October in Shenzen, China.

When she will play again is anyone’s guess.

In December, Andreescu withdrew from her first scheduled event of the season, the ASB Classic in New Zealand, due to to the knee injury.

Eugenie Bouchard and  Leylah Annie Fernandez are playing in the women’s qualifying this week.

With files from CBC, WTA, CP