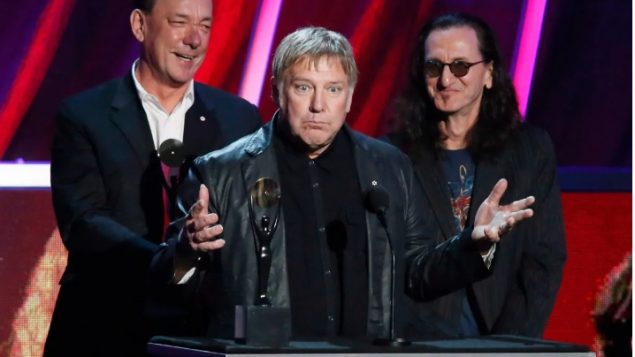 Rush members (from left) Neil Peart, Alex Lifeson and Geddy Lee were inducted into the Rock and Roll Hall of Fame in 2013. Peart passed away last week at 67. (Danny Moloshok/Invision/Associated Press/Canadian Press)

Canada’s artistic community has lost one of its own–the guy who provided the backbeat.

Neil Peart, the drummer and lyricist for the iconic progressive rock trio Rush, died a week ago after having been diagnosed with brain cancer three-and-a half years ago.

He had kept it quiet from all but his close friends.

His death at the age of 67 was announced Friday.

Peart was renowned and revered around the world by both musicians and fans.

“It is with broken hearts and the deepest sadness that we must share the terrible news that on Tuesday our friend, soul brother and bandmate of over 45 years, Neil, has lost his incredibly brave three-and-a-half-year battle with brain cancer,” his bandmates, Geddy Lee and Alex Lifeson, said in a statement.

Rush, which was inducted into the U.S. Rock and Roll Hall of Fame in 2013, was awarded numerous honours in Canada, including membership in the Canadian Music Hall of Fame in 1994, a place on Canada’s Walk of Fame in 1999; a lifetime achievement honour at the 2012 Governor General’s Performing Arts Awards; and an Order of Canada — the first time that a group was chosen to receive the honour.

The band played its last tour in 2015, with Peart revealing the following year in the Rush documentary Time Stand Still that he had fought intense physical pain during that final run.