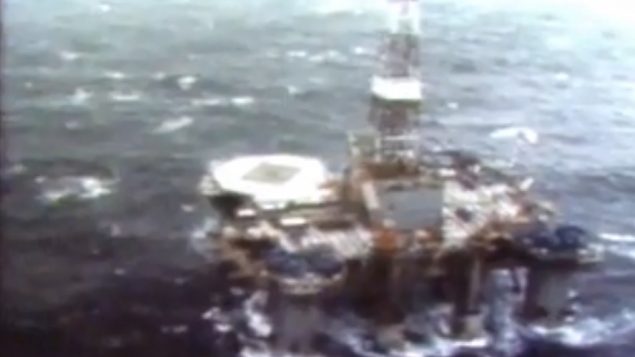 On Valentine’s Day, 1982, most of the 84 crew of the oil exploration/drilling rig Ocean Ranger would be thinking of loved ones far away on the mainland.

The platform was in the Atlantic over 260 kilometers from St John’s drilling exploratory wells in the Hibernia oil field for Mobil Oil.

The Ocean Ranger was  a self-propelled semi-submersible rig meaning it floated on giant ballasted pontoons 74m below the surface with a series of pumps and valves and control modules to adjust to sea conditions. It also had twelve huge 20-tonne anchors.  Because it did not float on the surface and the stabilization system, it was relatively stable in rough seas.  Launched in 1976, it was the biggest of its kind at the time, 121m long by 80m wide and 103m tall. It had previously drilled in Alaska, Ireland, and further south off the U.S coast of New Jersey before being moved to the Hibernia field in 1980 where it began operations in late 1981. 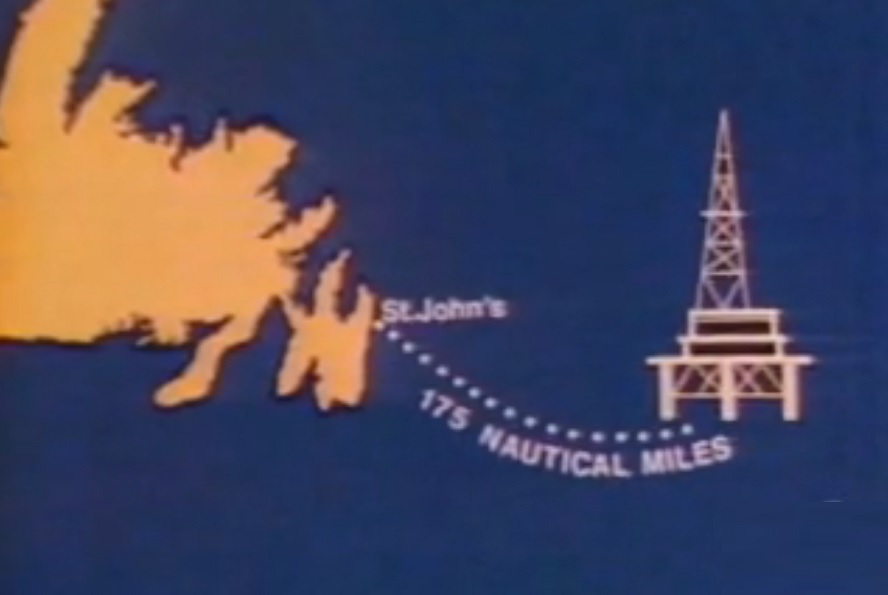 Early on the 14th the rig got word of a winter storm coming later in the day with near hurricane force winds and waves up to 11m.  In the late afternoon, the rig pulled up its drill and prepared for the storm.

By 7 pm, two other rigs in the area reported being hit by a giant wave.

Shortly afterward, they heard radio traffic from the Ranger that it was being hit by 17m waves and occasionally waves up to 20 m. Then came a report a  porthole had been smashed in and water had hit the control room and some of the ballast controls were acting up.  Later it appeared that all was ok.

At 1:00 am on the 15th a call went out that the rig was listing. Within minutes a call went to a supply ship to move in closer, and soon after that a mayday call was heard.

At 01;30, the last call came from the Ranger that crew were taking to lifeboats.

The supply ships from two other rigs were also dispatched and tried to reach the area but headway was extremely difficult in the massive waves and the black of night.

At 02;21, one supply vessel spotted flares and moved toward a lifeboat with men in it, but as they got a line to it, the heavy waves caused the line to snap and overturned the boat into the freezing Atlantic. None were rescued. 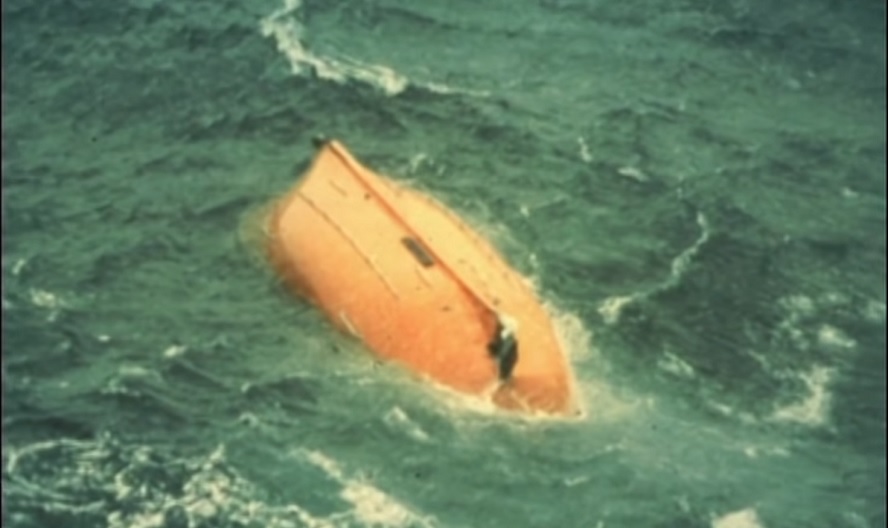 The lifeboats which were recovered all showed damage. (video grab Youtube BDHQ)

At 02;45 another rescue ship saw the Ranger listing heavily with waves breaking over the deck which would normally have been high above the water. There appeared to be no-one aboard and all lifeboats gone.

Searching through the night and next day vessels found two life boats and some of the inflatable life rafts, but with no-one aboard. Later another ship found a lifeboat with bodies inside but was unable to recover it. It was never seen again. 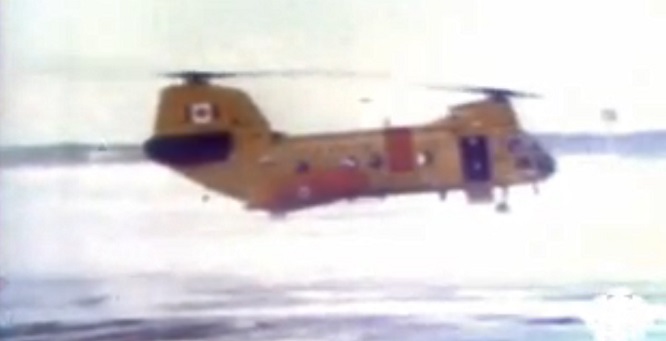 In the blizzard conditions still raging on the 15th a Canadian Forces Search and Rescue Ch-113 Labrador helicopter was dispatched but there were no survivors to be picked up. (CBC News)

A rescue helicopter also arrived on scene, but by then all crew were already likely dead.

At 03;00 the damaged Ocean Ranger battered by the violent seas, turned and sank.

As the search continued, eventually 22 bodies were recovered. Autopsies revealed death was from drowning or having succumbed to  hypothermia in the frigid ocean.

A Royal Commission investigation was begun in 1982 to find the cause of the sinking and why none of the crew survived in spite of (at least some) apparently leaving the rig successfully. The investigation later found design flaws in the rig and a lack of training of the crew for emergencies involving the ballast control system. The lifesaving equipment was judged inadequate. The result of the inquiry was a change in the design and safety features of ocean rigs, and in safety equipment and training.

But, even after the disaster, the rig still proved deadly.

The sunken platform lay on the bottom at a depth of 90 metres upside down so that a portion of it was only 30 metres from the surface and considered a shipping hazard. In June 1983 two divers sent down to prepare for movement to deeper water later died, bringing the death toll to 86.  A week later, another diver was killed, possibly from an object dropped from above.

The rig was eventually towed and sunk in deeper water.  This day remains a sad day in Newfoundland as 56 of the dead were from the province and the greatest Canadian maritime disaster since WWII.

The dangers of ocean drilling were once again seen when a helicopter flying crew out to another rig crashed in the ocean in March 2009 with the loss of 17 of the 18 on board.