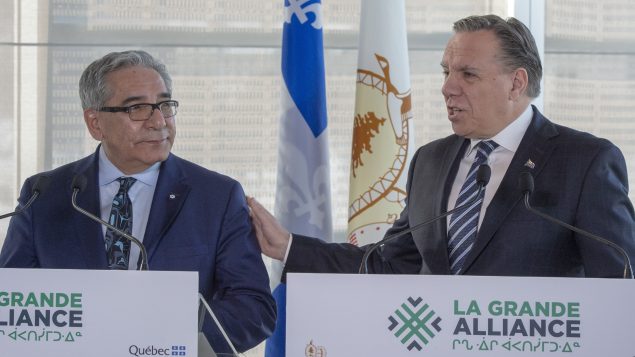 Quebec Premier Francois Legault, right, and Chairman of the Cree Nation Government Abel Bosum speak to the media after signing a Memorandum of Understanding on collaborative, long-term economic development at a news conference Monday, February 17, 2020 in Montreal. (The Canadian Press/Ryan Remiorz)

The Québec and Cree Nation governments have signed and agreed to a Memorandium of Understanding to ensure economic and social development and stability in the Eeyou Istchee James Bay region, according to a press release from the premier’s cabinet.

The collaboration, which was put forth by the Cree Nation, is expected to extend over a 30 year period.

“This Memorandum of Understanding marks just the first stage in an ambitious process to transform Eeyou Istchee’s infrastructure and economy,” Abel Bosum, the Grand Chief of the Grand Council of the Crees said. “The project will help to unlock the wealth of the region’s varied natural resources and create jobs and business opportunities for the Cree and James Bay residents, while protecting the environment and wildlife.”

The Grand Alliance agreement is a collaborative effort between the Quebec government and the Cree communities to build an extension of the rail network in the region, share infrastructure, as well as train the local labour force.

There will be plans to improve the standard of living and guarantee the long-term protection of the region.

An estimated $5B to be potentially invested during the course of this ambitious infrastructure plan that will create and optimize transportation infrastructure and protected areas in Eeyou Istchee. pic.twitter.com/SKVl9uhv9N

“We are initiating a new chapter in the relationship of trust and collaboration that unites Québec and the Cree,” said Quebec Premier, Francois Legault.

“This Memorandum of Understanding proves that it is possible to work together on ambitious socioeconomic development projects and take advantage of Northern Québec’s vast mining potential for the benefit of both our nations, in a spirit of respect for the environment, the territory and Indigenous values.”