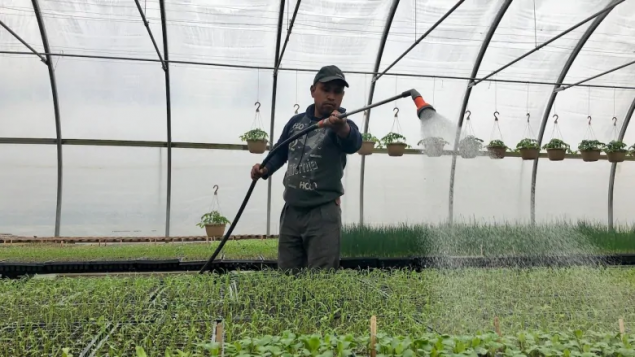 Canada annually has a critical need of tens of thousands of foreign farm workers to produce and process crops and livestock. Their ability to enter Canada is in some doubt due to entry bans on non-residents. A few thousand had come in before the ban representing only a small fraction of the numbers needed. (Emilie Richard/Radio-Canada)

– Food producers are now confused about foreign labour admissibility after one minister says they’re allowed, another says, not quite

When the Prime Minister announced a ban on non-residents, except Americans, being allowed into Canada, food producers in this country were immediately concerned.

Farming operations across the country rely heavily on foreign seasonal workers coming in to help with planting, maintenance and harvesting of crops and with livestock and food processing operations.

About 50-60,000 foreign farm workers are employed annually under the Temporary Foreign Workers Program (TFW) for seasonal work mostly on fruit and vegetable farms, and the 2-year stay of the Seasonal Agricultural Worker Program (SAWP), usually employed by livestock producers and food processing firms.

Yesterday, Public Security Minister Bill Blair seemingly allayed the serious fears of farmers saying the workers were crucial to Canada’s food production and would be allowed in after undergoing a 14-day isolation period.

The huge sigh of relief from farmers however was short-lived as confusion set in about mixed messages from the Liberal government.

The confusion came when another senior member of Cabinet said that only workers from the U.S. would be allowed in as per the prime minister’s announced ban on non-residents except Americans. 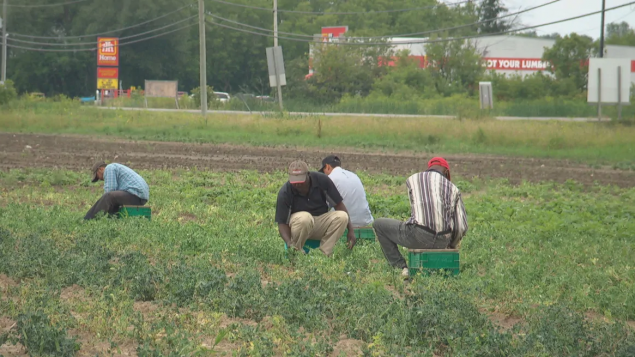 The workers are desperately needed for planting, maintenance throughout the season, and for harvesting. Between 50,000 and 60,000 arrive annually to help with the food production in Canada. (Reno Patry/CBC)

The vast majority of the workers come from Mexico, Central America, and the Caribbean.

The General Manager of the British Columbia Fruit Growers Association, Glen Lucas, says that farmers understand the seriousness of COVID-19 and the need to fight it, but said the potential food shortage from lack of labourers could end up being a worse problem.

Quoted in the Toronto Star, he said half the food consumed in B.C., was produced there, “so that becomes problematic if there are no workers to plant the seeds and harvest the food.”

The situation is similar right across the country, where only a small portion of the workers needed had arrived before the travel ban went into effect.

Glen Lucas says some farmers may face bankruptcy if they can neither plant nor harvest, and everyone says a decision to clarify the situation and allow these workers in must be made quickly as planting in most operations is either beginning, or will begin within the next few weeks.

For the foreign workers, it’s also a serious blow as many had already paid for plane fare and visa and absolutely depend on the Canadian wages to recoup those expenditures and bring needed money home to support their families.