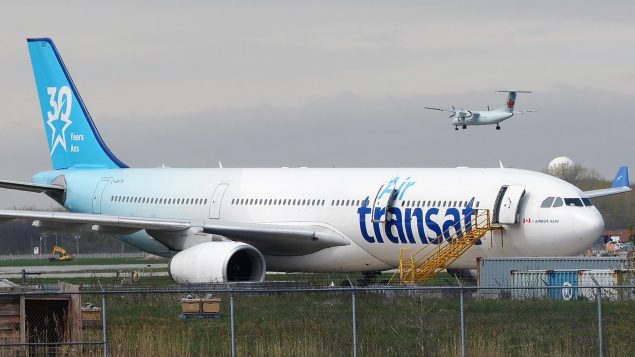 An Air Transat plane is seen as an Air Canada plane lands at Pierre Elliott Trudeau International Airport in Montreal on Thursday, May 16, 2019. Transat announced on Monday, March 23, 2020, that it is laying off 70 per cent of its workforce, including all flight crews, as a result of global travel shutdown due to the outbreak of COVID-19. (Ryan Remiorz/THE CANADIAN PRESS)

Canada’s largest leisure travel company, Transat A.T., announced “with great sadness” Monday morning that it is temporarily laying off about 70 per cent of its workforce, including “all flight personnel.”

The final Air Transat flight prior to the full suspension of its operations is scheduled for Apr. 1, the Montreal-based company said in a statement.

The layoff notice will affect about 3,600 employees, the company said. Some of the layoffs are effective immediately, while others will take effect following advance notice of up to one month, the company said.

Executives who are not being laid off have accepted voluntary pay cuts, as have members of the board of directors, Transaid said.

The decision comes as non-essential travel around the world comes to a standstill as governments close borders in an effort to slow the COVID-19 pandemic.

“These measures have forced us to totally suspend our operations,” Transat president and CEO Jean-Marc Eustache said in a statement.

“We have done this in such a way that none of our customers are stuck far from home, and we are in the process of bringing them back.”

The company said nearly 60 per cent of Transat customers – about 40,000 people – at overseas destinations had returned to Canada by Sunday.

The remaining 25,000 Transat customers are expected to be back in Canada by Apr. 1, by which time the airline will totally halt its flights, Eustache said.

“At the same time, in order to safeguard the company, we have unfortunately had to proceed with layoffs that affect a significant portion of our employees,” Eustache said. “We are doing this with great sadness and we hope that everyone will be able to return to work as quickly as possible.”

Last week, Transat announced the gradual temporary halting of all its flights until Apr. 30.

“In these circumstances, I want to pay the sincerest tribute to our flight crews, who have remained at their posts in stressful and difficult conditions, flying our aircraft sometimes without regard for their personal safety,” Eustache said.

“I can never say enough to express our gratitude, and the same goes for our commercial and administrative personnel who, each in their own job, made extraordinary efforts to successfully complete this unprecedented operation.”

Canada’s largest airline, Air Canada, announced last week that it will gradually suspend the majority of its international and U.S. transborder flights by March 31, 2020.

The country’s second largest airline, WestJet, suspended all U.S. and international flights as of Sunday.