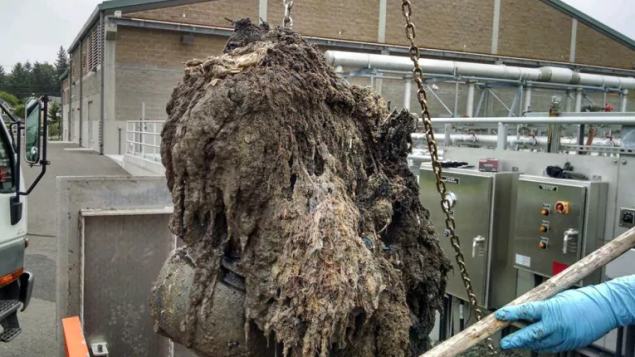 A 'fatberg' made up of disposable wipes and other wastewater solids pulled from a sewer.in the Okanagan region of British Columbia in 2017 (Regional District of South Okanagan-Similkameen)

Fatbergs ‘resurface’ as a result of COVID-19

It’s a modern society problem in cities around the world. So-called disinfectant ‘wipes; are being flushed down toilets. These disposable wipes are often advertised as ‘flushable’, much to the chagrin and cost of cities everywhere.

City engineers and others have been warning people for years about the problem these products cause in the wastewater systems. However, as people are much more concerned about disinfecting surfaces and body parts due to the novel coronavirus, sales of these disinfectant and cleaning wipes have shot up, as have sales of paper towels, in part because of panic buying of toilet paper which has resulted in shortages and in some cases, use of these ‘alternatives’.

They do not readily break down in the sewers and instead attract grease and other objects creating a lump in sewer systems. They can jam in pumps or if caught on something within the sewer, they in turn attract more wipes, paper towels, assorted other non-biodegradable objects, and more sludge until a giant blockage occurs. 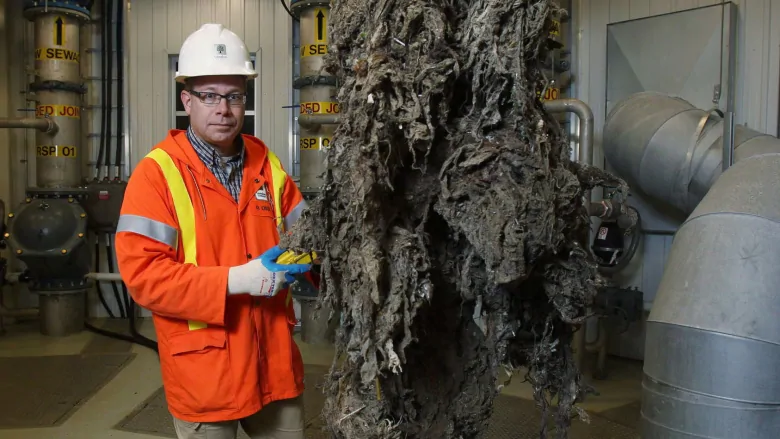 These horrid, smelly, semi-solid gooey lumps end up causing huge sewer problems and the blockages can also result in diverting vast amounts of untreated waste directly into the environment until the problem can be located and removed..  While this issue has been discussed in the past, the current COVID-19 crisis has only served to exacerbate situations.

Paper towels are rather stronger than toilet paper and also don’t easily break down in the sewers adding greatly to the “wipes” concern.  In addition people are flushing sanitary napkins, condoms, tampons, and diapers all of which add to huge problem

The U.S. spends the most on paper towels by far, followed by France, the U.K. Although studies didn’t include Canada, due to cultural similarities it could be expected that on a per capita basis, Canadians and Americans are fairly similar in use (and misuse) of the wipes, paper towels, and other objects going down the toilet

It is a global problem and authorities are once again telling people not to flush them and in light of increased use of these items are again sounding the alarm about not flushing them.