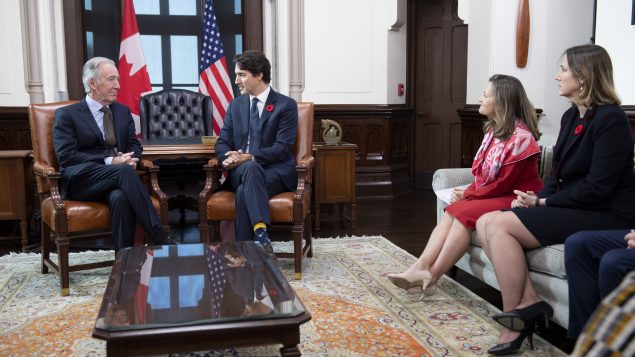 Canadian Minister of Foreign Affairs Chrystia Freeland, second from right, and Acting Ambassador of Canada to the United States of America Kirsten Hillman, right, look on as Prime Minister Justin Trudeau speaks with Richard E. Neal, Chairman of the Committee on Ways and Means of the United States House of Representatives on Parliament Hill in Ottawa, Wednesday Nov. 6, 2019. (Adrian Wyld/THE CANADIAN PRESS)

Kirsten Hillman made diplomatic history Thursday becoming the first woman to be named Canada’s ambassador to the United States, drawing praise both from Prime Minister Justin Trudeau and the opposition Conservatives.

Hillman, a former top trade negotiator, was officially assigned to Canada’s most important diplomatic posting in recognition of her “exceptional knowledge and skills” and being a “gifted diplomat.”

Hillman has served as Canada’s acting ambassador to the U.S. since August 2019, and was previously the deputy ambassador.

Under the previous Conservative government, she served as chief negotiator on Canada’s Trans Pacific Partnership team.

“When we worked together to negotiate the new NAFTA, I saw Ms. Hillman’s ability to stand up for Canadians and fight for their interests,” Trudeau said in a statement. “Ms. Hillman will remain a trusted advisor, friend, and counsellor in Washington and is our point person with Congress and the U.S. administration. I know that Canadians will be well represented by her.”

Congratulations @KirstenHillmanA on being appointed Canada’s permanent Ambassador to the United States. Kirsten’s exceptional leadership in the public service will serve Canada well during these challenging times.