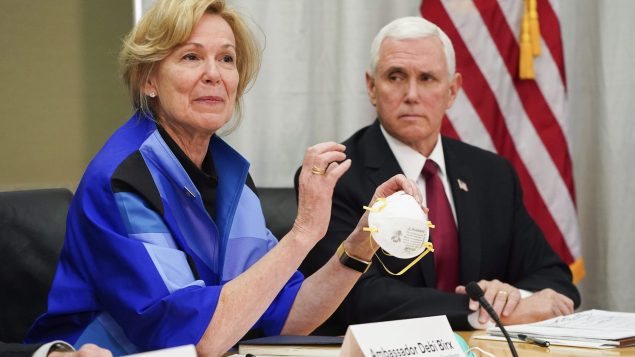 FILE - In this March 5, 2020, file photo, Dr. Deborah Birx, Ambassador and White House coronavirus response coordinator, holds a 3M N95 mask as Vice President Mike Pence visits 3M headquarters in Maplewood, Minn., in a meeting with 3M leaders and Minnesota Gov. Tim Walz to coordinate response to the COVID-19 virus. American multinational conglomerate 3M announced Friday that it has been ordered by the Trump administration to stop exports of its N95 masks to Canada and Latin America to prioritize the U.S. needs. (Glen Stubbe/Star Tribune via AP, File)

Trudeau warns the U.S. not to block imports of medical equipment to Canada

Prime Minister Justin Trudeau said Friday it “would be a mistake” to limit the flow of essential medical supplies between Canada and the U.S. amid reports that the Trump administration has instructed American multinational conglomerate 3M to stop exporting N95 masks to Canada and Latin America.

“We’ve been working very closely with the Americans to highlight what Canadians know very-very well, that the level of integration between our economies goes both ways across the border, that we are receiving essential supplies from the United States but the United States also receives essential supplies and products, and indeed healthcare professionals from Canada every single day,” Trudeau said during his daily briefing in Ottawa.

Thousands of Canadian nurses from Windsor, Ontario, cross the Ambassador Bridge across the Detroit River to work in the Detroit medical system every single day, Trudeau said.

“These are things that Americans rely on,” Trudeau said. “And it would be a mistake to create blockages or reduce the amount of back-and-forth trade of essential goods and services, including medical goods across our border. That is the point we’re making very clearly to the American administration right now.”

The American manufacturing giant announced Thursday that the White House formally invoked the Defense Production Act (DPA) on Thursday to require 3M to prioritize orders from the Federal Emergency Management Agency (FEMA) for N95 respirators produced by the company.

It warned that the order to stop exports to Canada and Latin America could have “significant humanitarian implications” and could backfire.

Germany accuses the U.S. of ‘of modern piracy’ 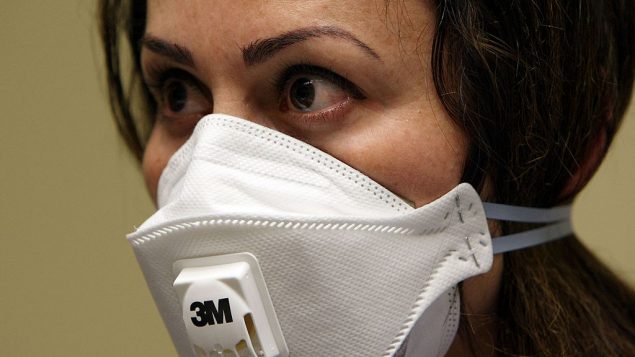 A nurse at the La Clinica San Antonio Neighborhood Health Center wears a N95 respiratory mask during a training session April 28, 2009 in Oakland, California. American multinational conglomerate 3M announced Friday that it has been ordered by the Trump administration to stop exports of its N95 masks to Canada and Latin America to prioritize the U.S. needs. (Justin Sullivan/Getty Images)

The news comes amid reports of no-holds-barred scramble by countries to replenish their rapidly dwindling supplies of protective equipment and other essential medical equipment.

Berlin’s top security official accused the United States on Friday of using “wild west methods” to obtain personal protective equipment. The claim came after a delivery of face masks destined for the German capital was diverted en route from China.

German media reported Friday that hundreds of thousands of masks purchased from manufacturer 3M and intended for Berlin police were diverted to the U.S. as they were being transferred between planes in Thailand.

Berlin officials confirmed that about 200,000 FFP2 masks already paid for by Germany were seized at a Bangkok airport and didn’t reach their intended destination. The masks are the equivalent of the U.S. N95 standard.

Andreas Geisel is the interior minister for Berlin state. He says the diversion of the masks is “an act of modern piracy. This is no way to treat trans-Atlantic partners.”

“Even in times of global crisis there should be no wild west methods,” Geisel said.

He added he wants the German government to demand the United States adhere to international rules.