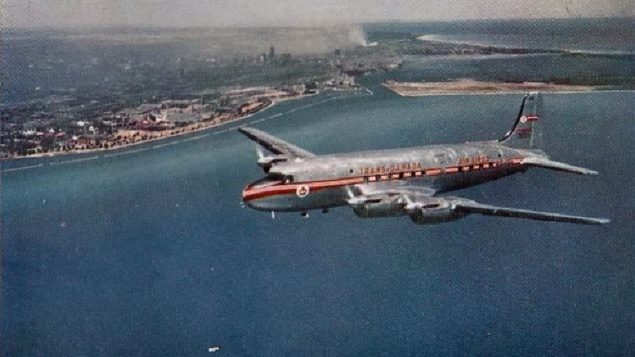 A Trans-Canada Airways Canadair DC-4M North Star,with Marlin engines and pressurized cabin, a Canadian improvement based on the C-54. DC-4, and DC-6, shown in this postcard above Toronto. A Canadian businessman' flight aboard a North Star led to a series of thrilling-suspense disaster films and novels.

What do the the 1980 comedy hit film ‘Airplane’, the 1970’s disaster film genre, and Canada all have in common?  They all began in Canada with the hugely successful novelist and screenwriter, Arthur Hailey. who wrote blockbuster novels and movies such as Hotel, Airport, Wheels  and others.

Having emigrated to Canada from Britain in 1947, by the 1950’s Hailey was a Canadian tractor-trailer sales executive, who had also been the editor of a trade publication called Bus and Truck transport.

In winter 1955, he was flying back from Winnipeg to Toronto aboard a Canadair North Star,

During the long, boring flight with the steady roar of the four Rolls-Royce engines sounding like a wartime Lancaster bomber, he reflected on his own experience flying fighters with the RAF over a decade earlier.

As a rusty pilot who hadn’t flown in years, he began to wonder if, in an emergency, could he fly this much different multi-engined aircraft if something happened to the pilots

By the time the plane landed, he had a fully formed story idea.and by March he had a screen play written which he thought would interest the still fledgling television service of the Canadian Broadcasting Corporation. CBC-TV which was then only four years old, was eager for original material and bought the script for $600.

The story was called ‘Flight Into Danger’. 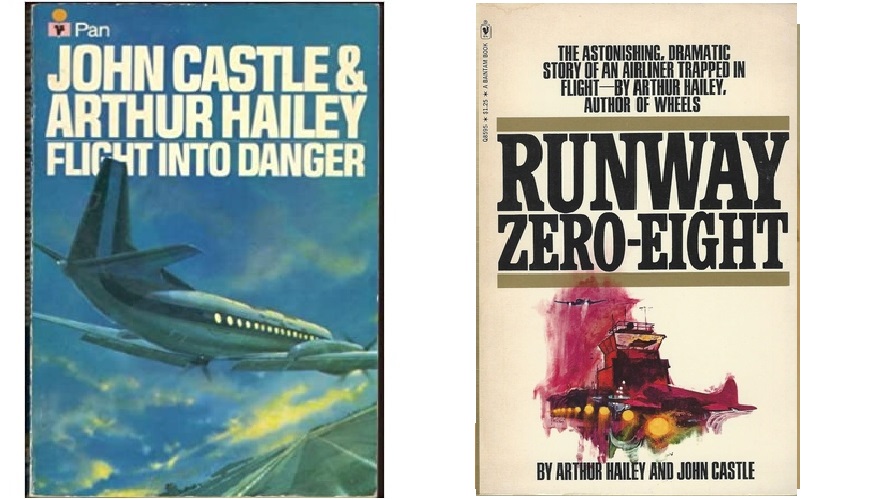 The story goes that aboard a Canadian long-haul flight from Winnipeg to Vancouver, both pilots and half the passengers are incapacitated by tainted meals. A passenger has to take over, a rusty WWII fighter pilot suffering from wartime trauma. Helped by a stewardess and ground controller, he tries to safely land the large plane, amid flashbacks, and having to fly through a storm.

On this date, April 3, 1956, the live play was broadcast on CBC’s General Electric Theatre and featured James Doohan as the struggling pilot.

The thrilling play was a huge success. So much so, that a filmed copy was rebroadcast a few months later due to popular demand, and later aired on the BBC to a spellbound audience of millions in Britain.

The U.S bought the play and  staged it on the “Alcoa Hour”, later becoming a film in 1957 called “Zero Hour!”  In 1958, the staged version was fleshed out into a hit novel first called “Flight Into Danger” and later as “Runway Zero-Eight”. Britain restaged it in 1962 while Germany bought the idea and in a 1964 film called it “Flug in Gefahr”

In 1968, influenced by his earlier suspense/disaster story, Hailey had a huge follow up hit with the novel and film ‘Airport’. The This in turn led to the creation of the 1970’s disaster film genre.

In 1971, it was redone in America by CBS television, renamed “Terror in the Sky”

This was followed by the hit comedy “Airplane’ in 1980, which was so successful in hilariously ridiculing suspense/thriller films, basically ended the ‘disaster’ genre. While many thought the comedy was based on the hit film Airport, in fact it’s almost an exact copy of the original 1956 Canadian screen play, Flight Into Danger.

While Hailey’s amazing success, and the entire disaster film genre has its roots in Canada, it is also interesting to note that the original reluctant pilot, Canadian James Doohan, later became ‘Scotty’ in the hit TV series Star Trek which also featured Canadian William Shatner as Captain James Kirk.  In the comedy “Airplane” the lead character was played by Leslie Neilson, another Canadian.