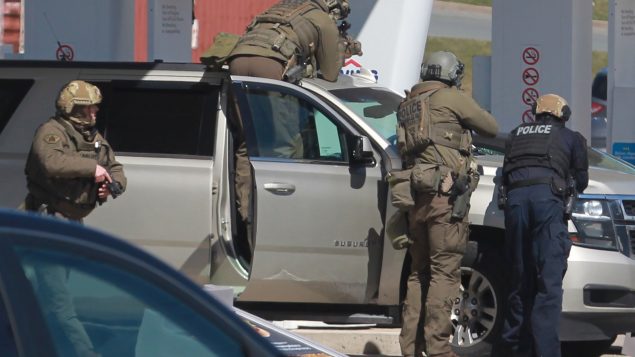 RCMP officers prepare to take a person into custody at a gas station in Enfield, N.S. on Sunday April 19, 2020. Police identified the suspect in a shooting spree that killed at least 19 people as Gabriel Wortman. The 51-year-old man died in a shootout with RCMP officers at the Irving Big Stop in Enfield, N.S., about 35 km from downtown Halifax. (Tim Krochak/THE CANADIAN PRESS)

The weekend’s shooting rampage in Atlantic Canada that has claimed 23 lives, including a 17-year-old, is reigniting calls for tighter gun control laws as Canadians wrestle to understand how such tragedy could have happened in the normally tranquil rural Nova Scotia.

The deadliest mass shooting in the country’s history has gun control advocates calling on the Trudeau government to enact its long-promised restrictions.

“While we appreciate the capacity for substantive policy change is difficult at this moment – and acknowledge your government’s efforts to respond to the gravity of the COVID-19 crisis and resulting consequences – we implore you to take one decisive, achievable action right now: ban the new sale of military style assault weapons,” a coalition of four gun control groups wrote in open letter to federal Public Safety Minister Bill Blair on Monday.

“As has been well documented, these guns pose an excessive risk to public safety and serve no reasonable purpose.” 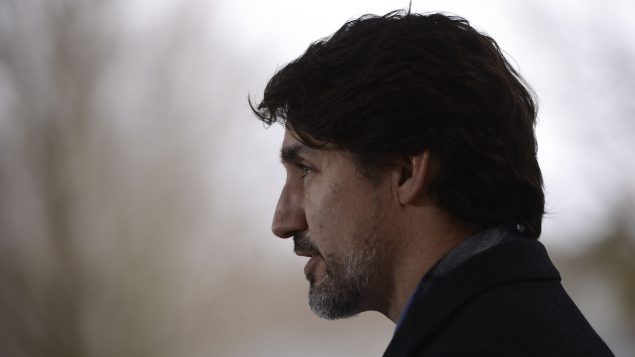 Speaking at his daily briefing in Ottawa, Prime Minister Justin Trudeau said the Liberal government has made commitments “to move forward rapidly” with the ban on so-called military style assault rifles.

“We were on the verge of bringing it in before Parliament was suspended through COVID-19 and we’re now looking at the right way and the right moment to bring it forward,” Trudeau said.

“The tragedy in Nova Scotia simply reinforces and is underlying how important it is for us to continue to move forward on strengthening gun control in this country and we will do that at the appropriate time.”

Trudeau said since the legislation on the assault rifle ban “was almost ready to go” when the Parliament was suspended due to the pandemic, he expects it will be the first measure introduced by his minority government.

“But, of course, as we learn more about this terrible-terrible tragedy in Nova Scotia, we will keep reflecting on ways that we need to help Canadians stay safe in their communities and in their homes across the country,” Trudeau said. 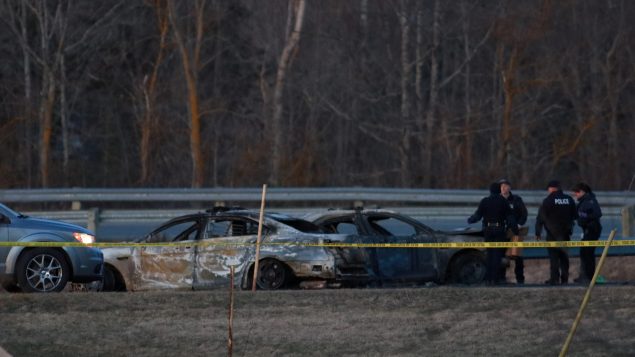 Police have identified the killer as Gabriel Wortman, a 51-year-old denturist and owner of a clinic in Dartmouth, Nova Scotia.

Investigators were still looking for a motive for the shooting spree that unfolded in four different communities on late Saturday and early Sunday, stretching over 100 kilometres, police said.

While some of the victims were known to Wortman others appeared to have been targeted randomly, officials with the Royal Canadian Mounted Police (RCMP) have said.

Wortman was seen wearing a police uniform and driving an exact replica of a police cruiser before commandeering another car during the pursuit.

They RCMP refused to discuss what kind of weapons Wortman used and whether they were obtained legally.

‘Not a gun problem’ 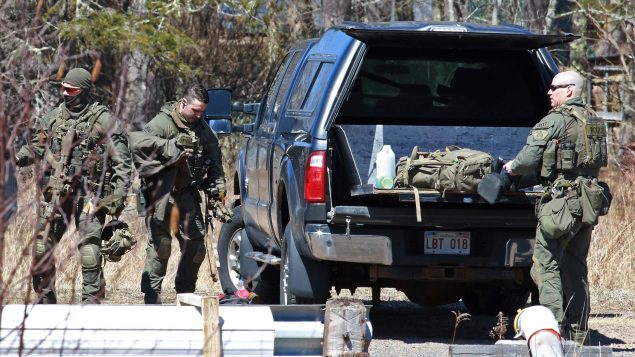 Guy Lavergne, a Quebec based lawyer who specializes in issues related to the regulation of firearms, said while the shooting spree in Nova Scotia has caused him “great sadness,” gun control groups were using it to move forward their agenda.

Very little is known about the perpetrator, his motivations, the way in which he killed his victims, or his modus operandi, Lavergne said.

“Yet, the federal government, and the various groups who wrote that letter to Minister Blair have all determined that it is a gun related issue,” Lavergne said. “I believe that we should focus on finding out what caused this man to act the way he did, before we prematurely conclude that it is a gun problem.”

Dr. Caillin Langmann, an emergency room physician and professor of medicine at McMaster University, who has written studies on gun laws and incidence of gun violence, said stricter gun control measures championed by the Liberal government and gun control activists have not reduced gun violence in Canada.

Langmann said Canada has already adopted very strict gun control legislation in years following the so-called 1989 Montreal Massacre, when a lone gunman killed 14 female engineering students at Ecole Polytechnique and injured 28 others before turning the gun on himself.

Lone wolf attacks by determined and resourceful individuals such as the one in Nova Scotia – now officially the deadliest mass shooting in Canada – are very hard to prevent, he said.

“It’s like looking for a needle in a haystack,” Langmann said.

Policy-makers should focus their energy on investing in social and mental health programs that address the underlying causes of violence and suicide, Langmann said.

It is also important to curtail the circulation of illegal guns instead of focusing on gun control measures that affect legal gun owners who are already subject to strict rules and regulations in Canada, Lavergne said.

The minority Liberal government will have to seek the support of the left-of-centre opposition parties in Parliament to push the proposed ban on certain types of semi-automatic rifles through.

The Conservative Party has opposed stricter gun control measures in the past.