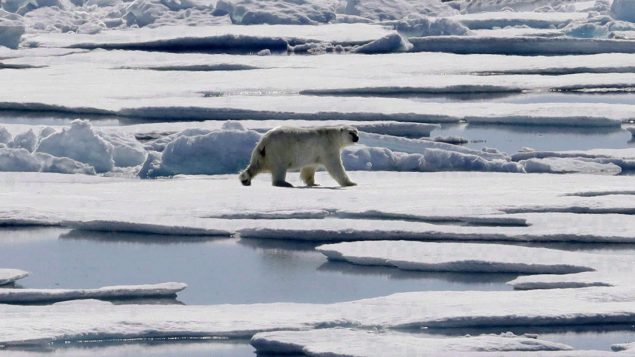 In this July 21, 2017 file photo a polar bear walks over sea ice floating in the Victoria Strait in the Canadian Arctic Archipelago. New research suggests that Arctic summer sea ice will completely disappear in most of the Arctic by 2050. (David Goldman/THE CANADIAN PRESS/AP)

Ice-free Arctic summers likely by 2050, even with climate action: study

Much of the Arctic Ocean will become ice-free during summers by 2050 even if greenhouse gas emissions are reduced sharply, according to a new study.

Using these models, scientists from 21 research institutes from around the world assessed the evolution of Arctic sea-ice cover in a scenario with high CO2 emissions and little climate protection.

As expected, summer Arctic sea-ice disappeared quickly in these simulations.

However, some of these models also showed that the ice still disappeared even in some simulations where CO2 emissions were rapidly reduced.

“The key point is that we have now reached a point that whether we are very aggressive in cutting our emissions or whether we go business as usual, we will be seeing years without any ice in the Arctic Ocean in the summer,” said study co-author Bruno Tremblay, associate professor in the Department of Atmospheric and Oceanic Sciences at McGill University.

What will change between different scenarios is the frequency at which this phenomenon occurs, Tremblay added.

“If we go business as usual, it will be a much more frequent occurrence, it will be pretty much always the case starting in 2030, 2035 or 2040,” Trembleay told Radio Canada International in an interview from Toulouse, France, where he is on sabbatical.

“If we do severe cuts to our CO2 emissions, it will be an occurrence that happens once in a while but it will still occur.” 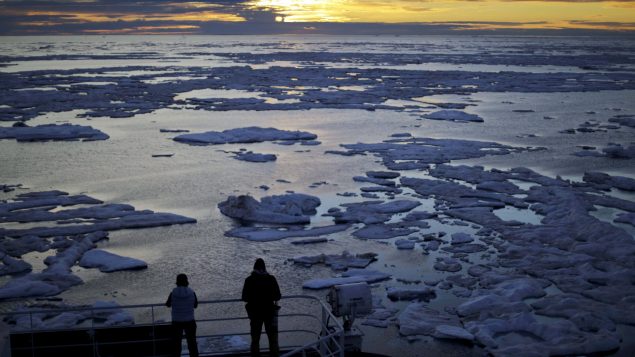 FILE – In this July 21, 2017 file photo, researchers look out from the Finnish icebreaker MSV Nordica as the sun sets over sea ice floating on the Victoria Strait along the Northwest Passage in the Canadian Arctic Archipelago. Studies show the Arctic is heating up twice as fast as the rest of the planet. (David Goldman/AP Photo/ File)

Each summer, the area of sea-ice coverage decreases and grows again in winter.

The entire Arctic Ocean, the smallest and the shallowest of world oceans, covers an area of about 14.06 million square kilometres.

Scientists define an ice-free Arctic as one in which the Arctic Ocean sea ice covers an area of about 1 million square kilometres or less, Tremblay said.

“When you have 1 million square kilometres of ice left, you have a thin, narrow band of ice left in the north of the Canadian Arctic Archipelago and some ice left within the archipelago but basically the entire Arctic Ocean is free of ice except for that very localized region,” Tremblay said.

The ice-free season is also expected to get substantially longer, he added.

“Ice always comes back in the winter but it will come back later and later, because as you have less and less ice, more solar light is absorbed in the surface ocean, it takes longer in the fall before you ventilate all this heat into the atmosphere,” Tremblay said. 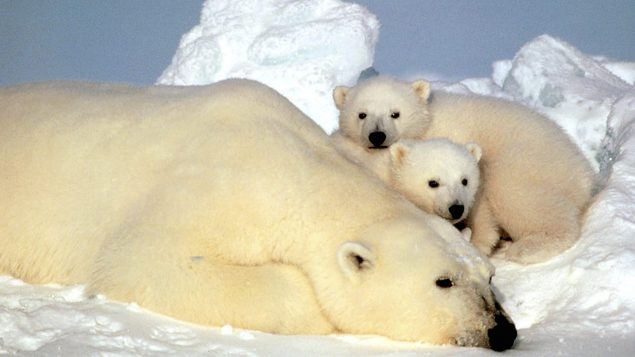 ** FILE ** This undated photo released by the U.S. Fish and Wildlife Service shows a sow polar bear resting with her cubs on the pack ice in the Beaufort Sea in northern Alaska. (AP Photo/U.S. Fish and Wild Life Service, Steve Amstrup, File)

This will substantially affect the Arctic ecosystem and climate, particularly ice-dependent species such as polar bears and seals, Tremblay said.

“This will mean for them a longer and longer period without ice, which basically means fasting,” Tremblay said.

“For polar bears it means staying on land and they will have to wait until the end of October, November and then finally December before they can return and hunt [on the ice],” Tremblay said.

Female polar bears give birth to cubs in January and February and then go on the ice in May to hunt seals and fatten up until the ice-free season comes and they have to fast, he said.

With the ice-free season coming earlier and lasting longer, this means polar bears will have to fast for much longer.

Research in the Western Hudson Bay in the southern part of the Canadian Arctic shows that the average fasting time for polar bears in the area has gone from 107 days in the 1980s to 130 days in the early 2000s.

“We’re seeing in the Hudson Bay now is what we will be seeing the Arctic Ocean in a decade or two,” Tremblay said.

The models looking even further into the future into 2100 and 2200 predict an ice free Arctic even in the winter, Tremblay said.

However, as the Arctic sea-ice extent decreases during this transition to an ice-free Arctic, the year-to-year variability in extent is expected to greatly increase, Tremblay said.

The last time the Earth experienced conditions like these was about 6,000 years ago at the end of the last glacial period when the solar insulation was much higher than it is now, Tremblay said.

“And what we’re going to see at the end of the century, you’re going to have to go back even further back, like hundreds of thousands of years, millions of years back when you saw conditions that warm,” Tremblay said.