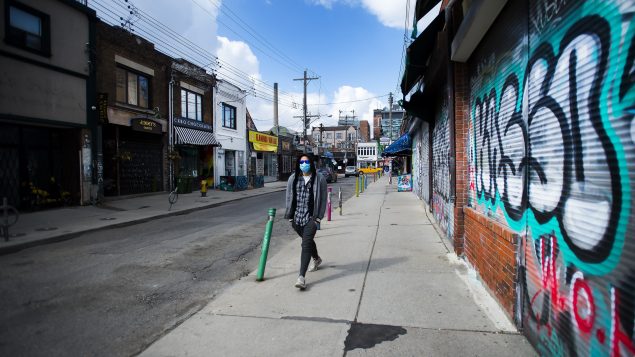 A lone person walks past closed businesses in Kensington Market in Toronto on Wednesday, April 15, 2020. As the federal government begins accepting applications for the Canada Emergency Wage Subsidy to soften the economic blow of the COVID-19 outbreak, many business owners wonder if their own wages are covered. (Nathan Denette/THE CANADIAN PRESS)

The emergency measure will cover 75 per cent of wages for businesses that have seen sharp declines in revenue since the novel coronavirus hit Canada hard in March, up to $847 per week per worker.

Applications opened early this morning and payments can be retroactive to the middle of March.

Trudeau says money under the program will start flowing by May 7.

In addition, there have been over 300,000 views of the online calculator launched on the Canada Revenue Agency website last week so businesses could determine in advance how much they’d be able to claim.

“That gives you a sense of just how many people this program will help,” Trudeau said, speaking at his daily press conference in Ottawa.

“Right across the country, it’s going to keep businesses and workers connected. And that gives people certainty that they’ll have a job now, and in the months to come, to support themselves and their families.”

Businesses still have many questions

A new survey by the Canadian Federation of Independent Business (CFIB) found that nearly half of small businesses plan to apply for the program.

“Our survey data indicates the wage subsidy program will be a big help for many small firms that have been struggling to keep their workers,” said CFIB president Dan Kelly.

“Unfortunately, the subsidy has already come too late for some businesses, who are not currently in a position to rehire laid off staff. But with signs in some provinces that businesses may soon begin a phased approach to reopening, an ongoing wage subsidy may prove very useful in bringing back workers who have been laid off.”

The CFIB is receiving thousands of calls from business owners each week and the complexities of the program remain a significant concern, Kelly said.

“The Canada Revenue Agency has been working with us to help provide answers, but much more needs to be done,” Kelly added.

The top questions business owners have about the Canada Emergency Wage Subsidy (CEWS) are:

The CFIB recommends business owners who have these or other questions visit cfib.ca/COVID19 for the latest information, or call the federation’s business help line at 1-888-234-2232 to speak with an expert, added Kelly.

“Given the emergency, CFIB is now providing free advice to all business owners, regardless of whether they are able to pay for a membership,” Kelly said.