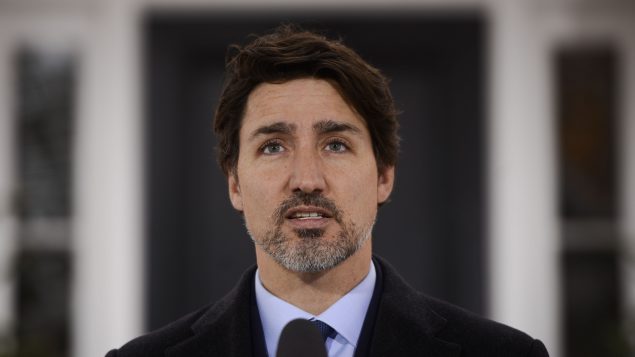 Canadian businesses whose revenue has decreased by 30 per cent or more due to the economic fallout from the COVID-19 pandemic will qualify for the government’s 75 per cent wage subsidy program, regardless of the number of employees they have, Prime Minister Justin Trudeau announced Monday.

The announcement offered new details to measures initially announced by Trudeau on Friday.

During the daily media briefing outside his residence at Rideau Cottage, Trudeau said the federal government will cover up to 75 per cent of a salary on the first $58,700 or up to $847 a week, urging companies to top up the rest, as well as hire back employees they had been forced to lay off.

Trudeau said the measure will be open to all companies and charities that meet the criteria and won’t be limited to just small and medium-sized businesses.

“This is about making sure that people are still getting paid whether they work for a business that employs 10 people or 1,000 people,” Trudeau said.

Trudeau said the wage subsidies will be retroactive to March 15, 2020.

Finance Minister Bill Morneau is expected to unveil further details of the plan on Tuesday.

Trudeau also warned businesses not to abuse the government’s confidence and use the money provided by the taxpayers to maintain their workforce, not to line their pockets.

“If you think this is a system you can take advantage of or game, don’t,” Trudeau said. “There will be serious consequences for those who do.

“Every dollar of this should go to workers,” Trudeau said.

The Canadian Chamber of Commerce said it “applauds” the government’s decision to include larger companies.

“We’re pleased the government is making its wage subsidy available to businesses and non-profits of all sizes,” said in a statement Perrin Beatty, president and CEO of the non-profit business advocacy group. “It will help protect and preserve otherwise healthy Canadian for-profit and non-profit organizations in communities throughout Canada.”

The inclusion of not-for-profit organizations recognizes their importance to the economy and that they face the same economic impacts as their private sector counterparts, Beatty said.