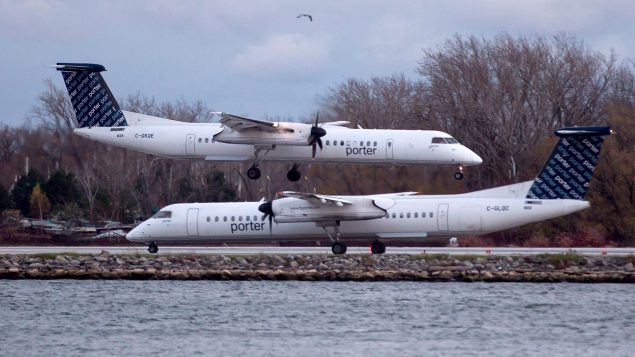 A Porter Airlines plane lands next to a taxiing plane at Toronto's Island Airport on Nov. 13, 2015. Porter Airlines says it will extend its suspension of all flights by another four weeks until June 29 due to the COVID-19 pandemic. (Chris Young/THE CANADIAN PRESS)

Porter Airlines announced Monday it is extending its temporary suspension of all flights due to COVID-19 by four weeks, until June 29.

The Toronto-based airline stopped flying on March 21, as travel restrictions and public health measures were increasing in North America.

“Our initial restart date of June 1 was something we believed was reasonable at the time,” president and CEO Michael Deluce said in a news release.

“While there are many promising signs about how COVID-19 is being contained, it is also clear that border restrictions, government-imposed stay-at-home orders and bans on non-essential travel will remain in place for many regions through much of May and into June. This makes it difficult for people to travel, so Porter will continue aligning its approach with the public health response.”

Like many airlines, Porter was hit hard by the dramatic reduction of air travel because of COVID-19. In addition to grounding all of its flights, the airline said it issued temporary layoff notices to most of its 1,500 staff members. The airline said it has been able to rehire some of them during the shutdown by applying for a new government wage subsidy program that covers up to 75 per cent of salary costs.

“We are eager to restart operations, so that team members can be recalled to work and we can help facilitate an economic recovery,” said Deluce. “This will be done in a responsible manner, taking into account health and safety precautions.”