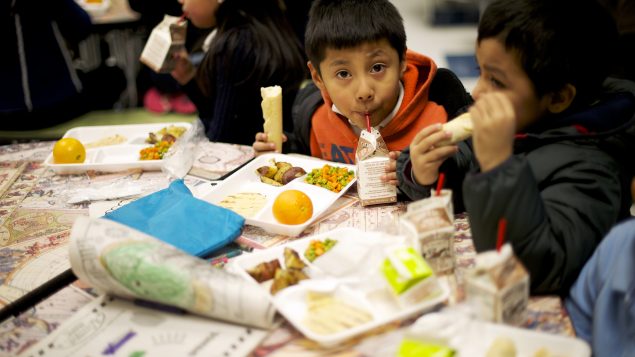 More than 370 million children in the poorest countries risk going hungry as school closures brought by the COVID-19 pandemic deprive them of school meals, the World Food Programme and UNICEF warned Wednesday.

WFP executive director David Beasley called on the international community to “act now to prevent the health pandemic from becoming a hunger catastrophe.”

“For millions of children around the world, the meal they get at school is the only meal they get in a day,” Beasley said. “Without it, they go hungry, they risk falling sick, dropping out of school and losing their best chance of escaping poverty.”

UNICEF and WFP are appealing for $600 million US to run the school meals programs in 30 low-income or fragile countries.

In many poor countries, the promise of a meal can be enough to make struggling parents send their daughter to school, allowing her to escape heavy domestic duties or early marriage, Fore said.

“School is so much more than a place of learning. For many children it is a lifeline to safety, health services and nutrition,” Fore said. “Unless we act now – by scaling up lifesaving services for the most vulnerable children – the devastating fallout caused by COVID-19 will be felt for decades to come.”

Jean-Pierre Zeelie, senior adviser on health and nutrition for Save the Children, said they are particularly concerned with the potential for increased malnutrition among children living in conflict and refugee settings.

“The hard truth is severely undernourished children are nine times more likely to die from common infections than well-nourished children,” Zeeline said. “It is critical that Canada consider the nutrition needs of these children within our international response to the pandemic, and lead the way in ensuring that girls are not left behind.”

In addition to meals, schools also often provide children in poor countries with other critical health and nutrition services, such as vaccinations, deworming and iron supplementation, UN officials said.

A report released by UN Secretary General Antonio Gutteres in mid-April noted that the looming global recession resulting from the COVID-19 pandemic could cause hundreds of thousands of additional child deaths this year.

The report found that the socio-economic impact of the pandemic, together with measures to mitigate the spread of the new coronavirus, could potentially be catastrophic for millions of children worldwide.

Though children “have so far been largely spared from the most severe symptoms of the disease,” the report found the broader effects of the crisis on child health are significant.

The pandemic has forced public health authorities to pause polio vaccination campaigns in the last two remaining strongholds of the disease: Afghanistan and Pakistan, thus endangering global efforts to eradicate it completely, the UN report warned.

“With the global recession gathering pace, there could be hundreds of thousands of additional child deaths in 2020,” Gutteres said.

This scenario would effectively reverse progress made in reducing infant mortality over the past two to three years, the UN report warned.

“And this alarming figure does not even take into account services disrupted due to the crisis – it only reflects the current relationship between economies and mortality, so is likely an under-estimate of the impact,” said the report.