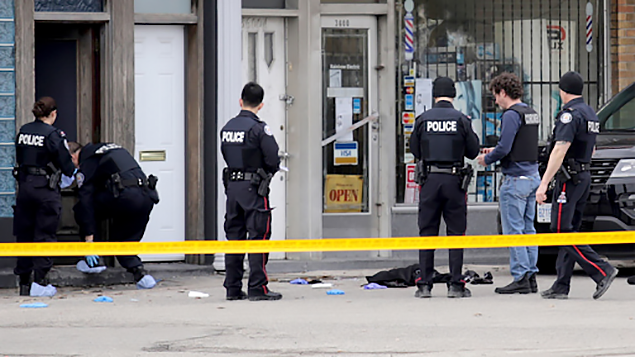 One woman was killed and two other people were injured in an attack at a massage parlour in Toronto on Feb. 24. Police say they have evidence linking the attack to incel ideology and a 17-year-old boy is being charged with terrorism in the case. (Michael Cole/CBC)

The accused, who cannot be named because he is a minor, was already facing first-degree murder and attempted murder charges following the attack that left one person dead and two others wounded.

The updated charges mean the accused could face an automatic life sentence if he is convicted on any of the charges.

Ashley Noell Arzaga, a 24-year-old employee of the massage parlour, was found dead at the scene, while another woman, who was later identified as the parlour’s owner, was also badly injured in the incident.

When Toronto police learned the crime may have been motivated by an extremist ideology, they contacted the RCMP, which decided to press terrorism charges.

On Tuesday, the RCMP elevated the charges against the 17-year-old boy after officers found evidence that the accused was “inspired by the Ideologically Motivated Violent Extremist (IMVE) movement commonly known as incel.”

Incel, or involuntary celibate, is an internet subculture of primarily straight men who claim they cannot find a romantic relationship, and resort to resenting or hating hating women because of it, sometimes to violent levels.

“Terrorism comes in many forms and it’s important to note that it is not restricted to any particular group, religion or ideology,” the RCMP said in a statement.

A van attack two years ago that left 10 people dead, also appears to have been carried out by a person promoting incel beliefs.

The suspect in the attack, Alek Minassian, later told police in a lengthy interview after the attack that he carried it out in retribution for years of sexual rejection and ridicule by women.

“I believe that’s an appropriate use of that legislation,” he said. “Those types of motivations can’t be tolerated in our society and they do seriously aggravate the nature of those crimes.”

“We monitor the various motivations for those types of crimes and where it is ideologically motivated as this case was, we look at that very seriously as a terrorist offense.”