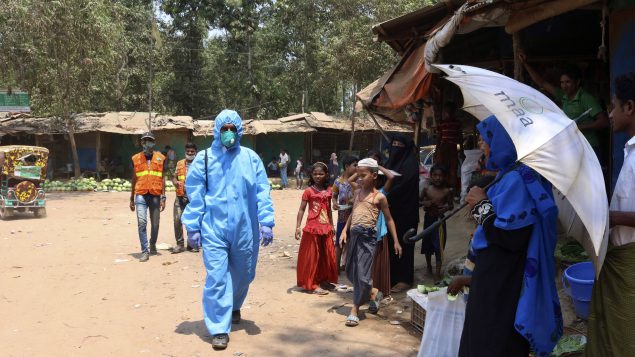 FILE - In this April 15, 2020, file photo, a health worker from an aid organization walks wearing a hazmat suit at the Kutupalong Rohingya refugee camp in Cox's Bazar, Bangladesh. Authorities on Thursday, May 14, 2020 reported the first coronavirus case in the crowded camps for Rohingya refugees in southern Bangladesh, where more than 1 million refugees have been sheltered, a Bangladeshi official and the United Nations said. (Shafiqur Rahman/AP Photo, File)

Nearly a million Rohingya refugees sheltering in overcrowded camps in Cox’s Bazar, in southern Bangladesh are bracing for a perfect storm of a COVID-19 outbreak and a powerful cyclone barrelling towards the region.

Five cases of COVID-19 have been confirmed in a set of 34 refugee camps in the Teknaf and Ukhiya sub-districts in Cox’s Bazar, as Bangladesh and India are preparing for the arrival of Cyclone Amphan.

The super cyclone, currently packing winds of up 230 kilometres per hour, is expected to make landfall on Wednesday afternoon, and forecasters have warned of extensive damage from high winds, heavy rainfall and tidal waves. 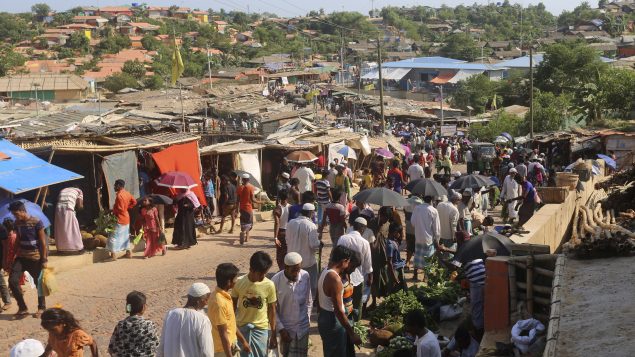 “We’ve got a super cyclone bearing down in the midst of trying to cope with and contain COVID-19,” said Homer, who returned to Canada in late March after spending two-and-half years working in Rohingya refugee camps in Cox’s Bazar for the Christian charity.

The camps are among the most densely populated places on earth, with 40,000 people living in bamboo and tarpaulin shacks per square kilometre.

Each shack in the camp is barely 10 square metres and many are packed with up to 12 residents.

“So you can imagine the challenges of social distancing in that context,” Homer told Radio Canada International in a phone interview from Ottawa. 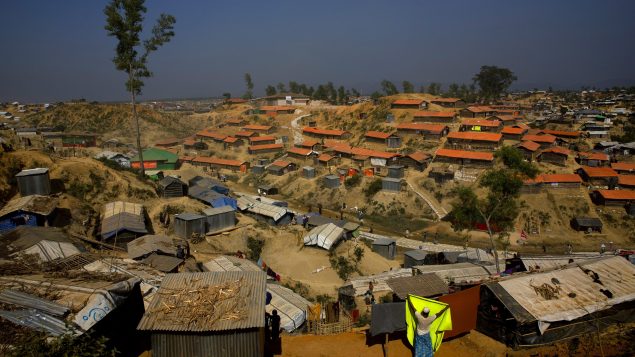 FILE – In this Jan. 23, 2018 file photo, a Rohingya refugee hangs a blanket out to dry at Balukhali refugee camp, about 50 kilometers (32 miles) from Cox’s Bazar, Bangladesh. (Manish Swarup/AP Photo, File)

Nationwide, Bangladesh has confirmed 25,121 cases, including 370 fatalities. But the toll is thought to be higher since adequate testing facilities are lacking in the South Asian nation of 160 million people.

Séverine Meyer, senior program manager of Emergencies & Humanitarian Assistance at Plan International Canada, who returned from Cox’s Bazar in late February, said aid agencies on the ground worry that the number of cases in the refugee camps is also much higher than the five reported cases so far.

“Their worries are compounded by the fact that this refugee camp is among the largest in the world,” Meyer said. “As a result of this overcrowded condition, social distancing is very difficult and also access to water is a very big challenge.”

There are only primary health units in the camps, Meyer told Radio Canada International in a phone interview from Quebec City.

“In terms of Intensive Care Unit (ICU) capacity Cox’s Bazar proper has only 10 beds,” Meyer said. “This would be for the entire population of the refugee camp, as well as the people living in the host community.”

There are efforts being made to create self-isolation units in the camp as well as in three hospitals in Cox’s Bazar, Meyer said.

“But should the virus spread very widely, this would obviously be insufficient,” Meyer said. “This is our main worry at the moment.” 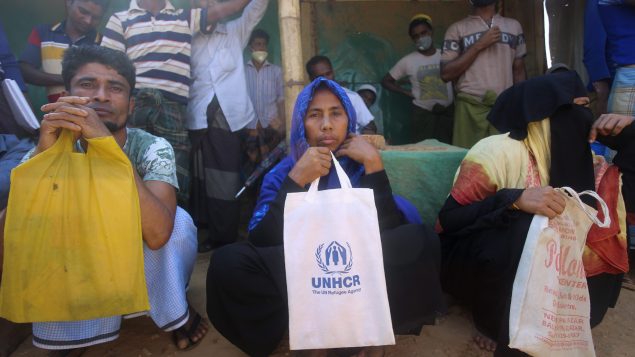 In this Wednesday, April 1, 2020, photo, Rohingya refugees sit at the Kutupalong refugee camp, Cox’s Bazar, Bangladesh. Aid workers are bracing for a possible outbreak of the coronavirus in one of the world’s largest refugee camps in Bangladesh, but officials are already warning that containing the disease among more than 1 million tightly packed Rohingya Muslims will be a daunting task. (Suzauddin Rubel/AP Photo)

Homer said aid agencies have had two months to prepare for the outbreak.

“This window of opportunity has given World Vision and other aid agencies time to prepare people, so we’ve been saturating the ground with information about prevention, social distancing as much as possible, encouraging people to stay in their homes, and we’ve also been continuing to deliver critical services,” Homer said.

To contain the spread of the pandemic in the refugee camps the government of Bangladesh has severely restricted the kinds of services that can be delivered, but food assistance, water and sanitation, and child nutrition projects are still going on, Homer said.

“We feel the Rohingya have been prepared as much as humanly possible although we’re concerned about the lack of hospital beds,” Homer said.

However, Homer said the biggest fear for World Vision, the UN agencies and humanitarian groups working in Cox’s Bazar is continued unrestricted access to the camps to deliver lifesaving services.

“If the cyclone hits that area, it’s unlikely that it is going to have a direct hit but there will be extremely heavy rains and that may block roads and further inhibit our access,” Homer said. “We’ve gone from 1,600 staff in the camps down to about 300.”

Another challenge for humanitarian groups is that the refugee camps have not had access to Internet and mobile phone service since September, Homer said.

The Internet was turned off by the government for security concerns but the Rohingya refugees, most of whom are illiterate, receive most of their information by mobile phone.

“It’s a challenge to produce information quickly for them,” Homer said.