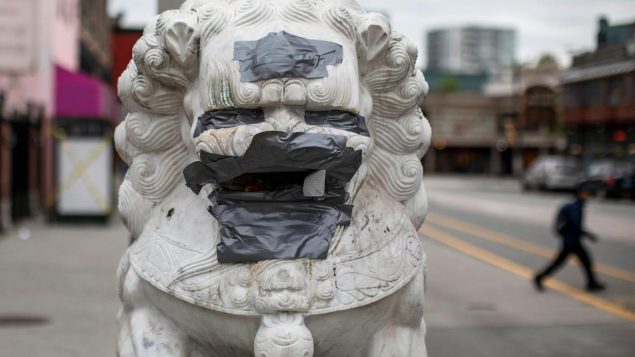 A lion's statue in Vancouver's Chinatown is covered by tape after being defaced with racist graffiti. (Ben Nelms/CBC)

A new poll from the non-profit Angus Reid Institute and the University of Alberta shows that half of Chinese-Canadians surveyed reported being called names or insulted as a direct result of the COVID-19 outbreak.

Nearly four-in-ten respondents said they’ve been threatened or intimidated, according to the online survey of 516 Canadians conducted between June 15 and 18.

Additionally, three-in-ten reported being frequently exposed to racist graffiti or messaging on social media since the pandemic began and said they have frequently been made to feel as though they posed a threat to the health and safety of others.

“Since March 2020, I have been repeatedly yelled at on the sidewalk in my own neighborhood. I have had my citizenship questioned despite my response stating that I was born in Canada when chatting with others,” one of the survey participants told researchers.

A man in his 60s reported being spat on by a cyclist.

Others were told “shut up and go back to where you came from,” the survey showed.

Shachi Kurl, executive director of the Angus Reid Institute, said the poll shines a light on the extent of racism across the country.

Despite the fact that 88 per cent of respondents agreed that “being Canadian is an important part of my identity,” only 13 per cent agreed that others see them as Canadian all the time.

“It says to me that you can be in this country for five years or you can be fourth generation but because of the way you look there is still a barrier to being accepted or to be viewed as fully Canadian by others,” Kurl said.