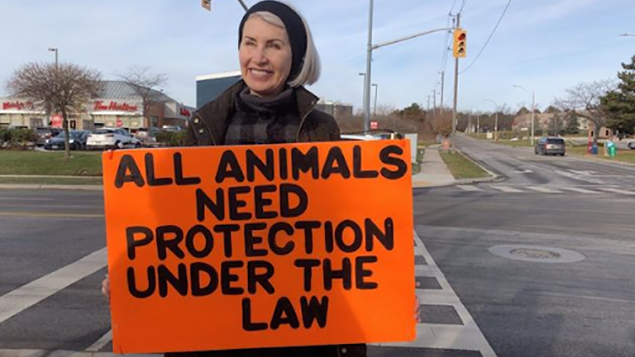 An undated photo of Regan Russell protesting. Russell was killed Friday outside an Ontario slaughterhouse when she was struck by a truck carrying pigs to the facility.  (Animal Justice)

An animal-rights activist has been killed at a protest at a slaughterhouse in Burlington, Ontario.

Regan Russell, described as one of the pioneers in Canada’s animal-rights movement, was run over by a transport truck filled with pigs outside the Fearman’s Pork Inc. facility on Friday morning.

Ten thousand pigs a day are trucked to the facility, which has long been a target for animal rights protesters to gather at the entrance gate.

Activists often give water to the pigs in the trucks waiting to get into the plant and Russell had long been an active participant.

“She was one of the kindest people you will ever meet,” Camille Labchuk, executive director of Animal Justice, told RCI Saturday morning following an all-night vigil to honour Russell, who was 65, outside the plant’s gates

Video viewed by CBC News shows activists from Toronto Pig Save at a planned protest outside the facility at roughly 10 a.m. Friday.

In the video, demonstrators show the pigs inside the metal trailers attached hauled by trucks entering the slaughterhouse.

More video appears to show the victim lying beneath one of the trucks.

“She was in front of the truck when it ran over her,” Anita Krajnc, co-founder of Toronto Pig Save, told CBC News.

Krajnc did not witness the incident but said she had heard from other activists who were there at the time.

“Regan was a kind, elegant, strong, and courageous person,” said Krajnc, the founder of the Animal Save Movement.

“She was a mentor to others, and she always did activism with kindness in her heart.”

The bill raises fines for trespassing on farms and food processing facilities and makes it illegal to obstruct trucks carrying farm animals and has infuriated animal rights groups. 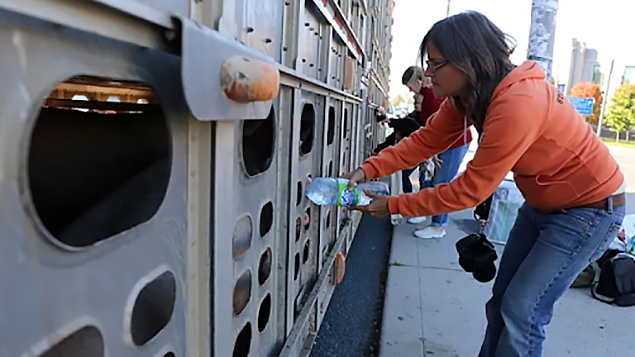 Toronto’s Anita Krajnc was charged with criminal mischief in 2015 when she pushed a water bottle into a truck-load of pigs on their way to slaughter in Burlington, Ont. She was acquitted in 2017. (HO-Elli Garlin/CP)

“Our thoughts and prayers go out to the individual and her family. This is a tragedy and we extend our sincere condolences to them,” wrote Daniele Dufour, the company’s Senior Director, Communications, Public Relations and Consumer Inquiries.

“We also recognize the impact that this event had on our employees and have been providing support to them in these very difficult times.”

Krajnc gained attention across Canada in 2015, when she was arrested and charged with criminal mischief for giving water to pigs in a transport truck outside of the Fearmans slaughterhouse.

She was acquitted in 2017 after a much-publicized trial.

Activists say they adhere to strict protocols during their protests and vigils.