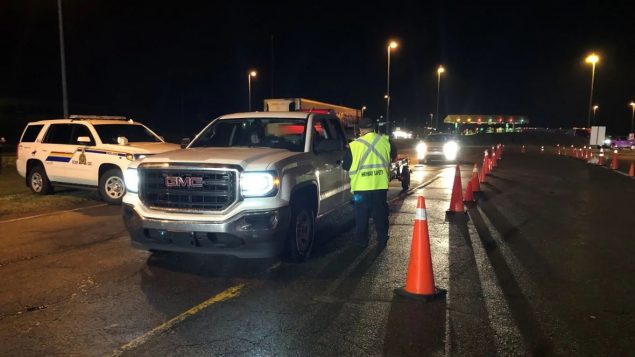 Some travellers were ready to cross into P.E.I. the moment Confederation Bridge was open to them. (Julien Lecacheur/Radio-Canada)

Maybe it’s a really good sign that things are ready to return to something resembling normal in a region with 2.2 million people and a total of six active cases of COVID-19.

When midnight arrived Friday morning, people Down East were more than ready. 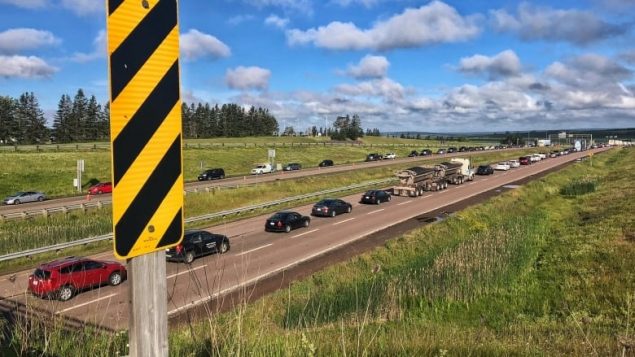 Residents in the region’s four provinces–Nova Scotia, Prince Edward Island, New Brunswick and Newfoundland and Labrador–finally had permission to move about in the so-called Atlantic bubble without having to self-isolate.

Until today, anybody from there wanting to travel to another province there needed to quarantine for 14 days upon arriving in their destination province.

Shortly after midnight, a steady stream of vehicles was moving on the Confederation Bridge, heading to Prince Edward Island.

Officials estimated that 300 to 400 vehicles crossed in the first 90 minutes while a second burst of activity at first light, left–at one point–30 to 40 vehicles lined up at the toll booth.

Photos shared on social media showed P.E.I. Premier Dennis King greeting travellers at the toll booths on the P.E.I. side of the bridge, where tourists were being offered potato bags holding a selection of Island products. 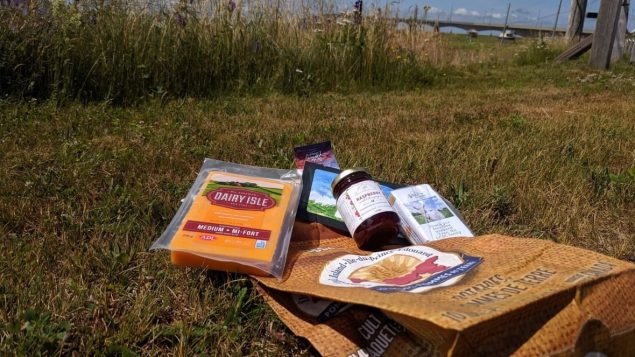 Elsewhere, long lines of cars, trucks and recreational vehicles were–well–lined up to move across Nova Scotia and New Brunswick’s borders.

The lineup to get into Nova Scotia at 8 a.m. was holding up traffic for about 15 minutes, but once at the front of the line the screening process took less than a minute to complete.

Officials for Marine Atlantic reported a spike in ferry bookings between Nova Scotia and Newfoundland and Labrador during the run-up to this morning’s launch.

A return to normal?

Isn’t that pretty much how all vacations begin? 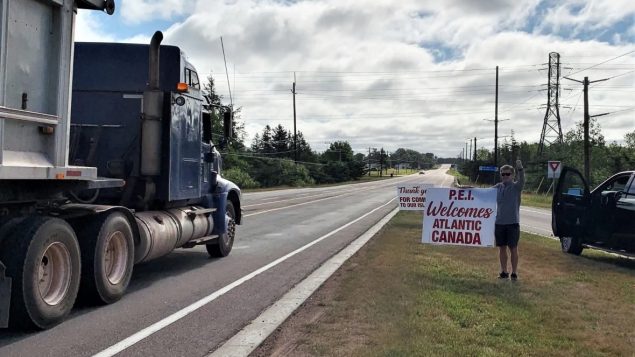 Terry McKenna of Charlottetown took it upon himself to set up on the highway near Confederation Bridge to greet arriving Atlantic Canadian visitors. (Shane Ross/CBC)

There are still rules to follow, of course, and each province has its own.

Bottom line: everyone out and about must be able to prove they come from not that far.

Other Canadian visitors to the Atlantic Canada who have self-isolated for 14 days may travel within the region..

But not to Newfoundland and Labrador, where public health officials and politicians have stated on numerous occasions that new cases are not unexpected, but that testing, isolating and contract tracing have all proven to be effective in minimizing the virus’ spread.

A petition is now circulating to make sure the bubble doesn’t get any bigger.