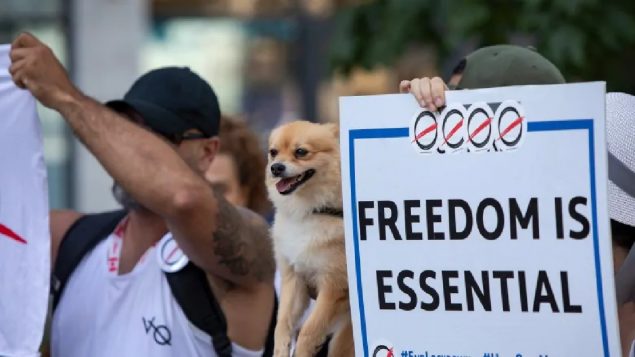 A group of protesters affiliated with a group opposed to the mandatory wearing of masks as a preventative measure against the spread of COVID-19 rode the TTC Tuesday, but were not ticketed. (Evan Mitsui/CBC)

Yesterday was the first day for an order requiring  mask wearing in all indoor spaces in Toronto, Canada’s largest city. Similar mandatory mask wearing bylaws have just been enacted in the national capital, Ottawa, throughout much of eastern Ontario and soon throughout cities around Toronto. At the end of the month the major urban centre of Montreal, Quebec will also enact a mandatory mask law for all indoor spaces.

As Toronto’s mandatory mask law came into effect yesterday, a small group gathered in Toronto to protest the order and to ride on the public transit subway where mask wearing against the potential spread of the coronavirus has been in place since July 2. Many of the group were wearing T-shirts saying ‘hugs over masks’ with some signs reading ‘no fear’.

The group gathered at a major downtown Toronto intersection first and then descended into the subway system for a short ride before re-emerging at another downtown intersection where they engaged with passersby about their opposition to mask wearing.

Protestors state their case for why they oppose mandatory masks. pic.twitter.com/Nbx3Rz593Z

Among the group was a woman who this week went to the city’s St Joseph’s hospital emergency room for a possible broken finger but was refused treatment because she wasn’t wearing a mask.

Speaking to CP24 Letitia Montana said, “Why do our rights have to be suppressed, so that somebody else would feel better? Is that the world we want to live in? That is what has led us to the greatest atrocities throughout history that have oppressed minorities, have oppressed dissonance. Anyone that doesn’t follow … you’re an outcast, you’ve gotta be killed, you’ve gotta be ostracized. IIs that the Canada we want to live in? 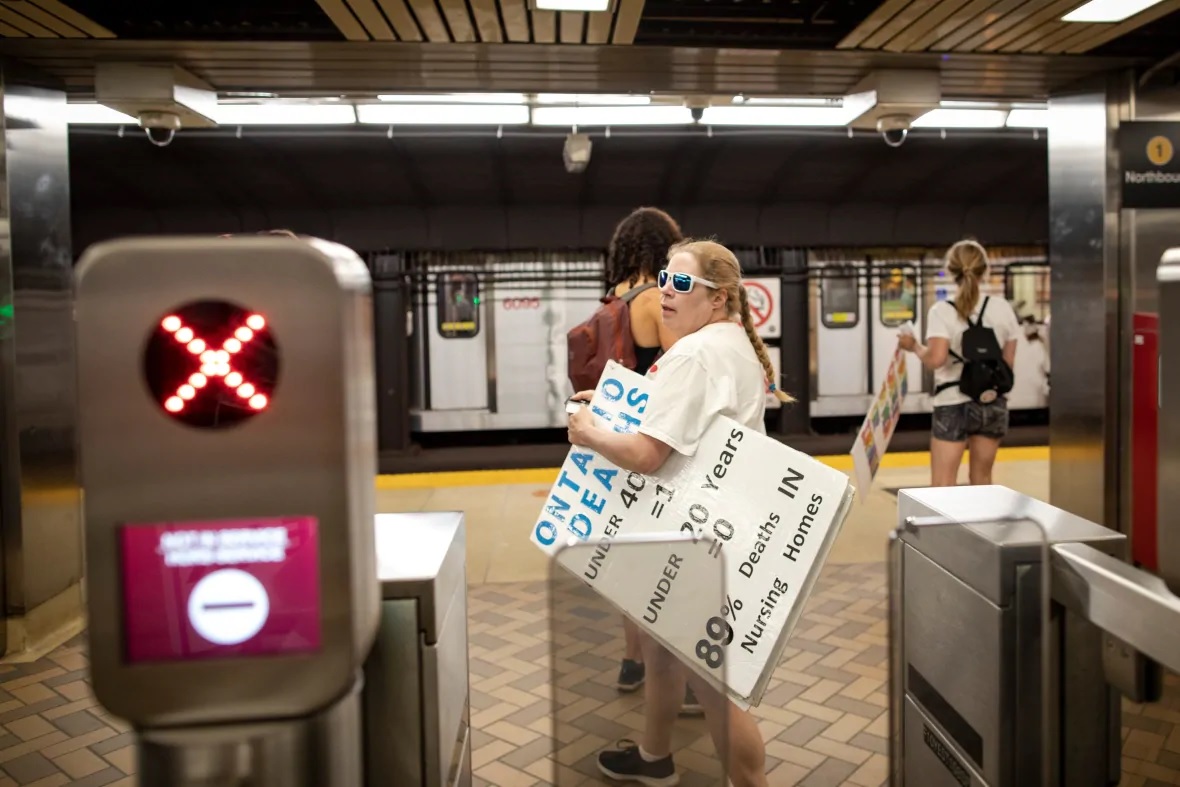 Protesters with their signs board the subway to protest obligatory mask wearing orders. TTC officials say the number of people on transit in Toronto are wearing masks has increased dramatically to over 80 per cent of riders . (Evan Mitsui/CBC)

Toronto Mayor John Tory who has strongly encouraged mask wearing said he was unconcerned by the protest noting it involved only about 40 people in a city of millions.

Failing to wear a mask in the subway or indoors has the potential for fines in the several hundreds of dollars but none of the group was charged.

A city councillor and member of the Toronto Transit Commission board (TTC) labelled the protest as a ‘political stunt’. Quoted by CBC Shelley Caroll said, “I hope that people who want to safely ride the TTC understand that we’re going to do our level best to make sure this little movement that started today is a short-lived one.”

Ontario’s Ministry of Health reports only 112 new positive tests for the virus, which is the second lowest number of new cases since March. There were no COVID deaths on Monday, and two deaths reported on Tuesday.