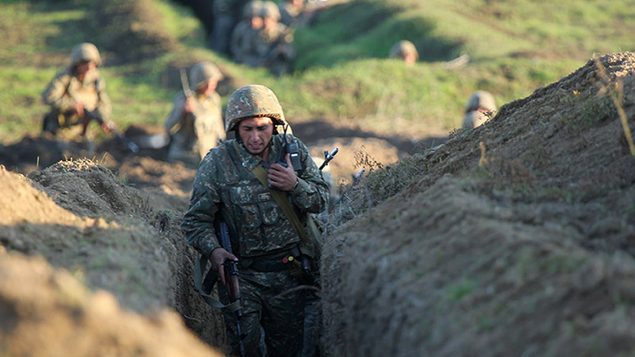 Armenian soldiers take their position on the front line in Tavush region, Armenia, Tuesday, July 14, 2020. Skirmishes on the volatile Armenia-Azerbaijan border escalated Tuesday, marking the most serious outbreak of hostilities between the neighbors since the fighting in 2016. (Armenian Defense Ministry Press Service/PanPhoto via AP)

Fighting along the restive border between Armenia and Azerbaijan flared up again on Thursday, hours after Canada and several other countries called on the two South Caucasus neighbours to “refrain immediately from using force” and respect the ceasefire.

Armenia’s Defence Ministry accused Azerbaijani forces of trying to launch a night-time commando raid against its positions in the northeast of the country. Ministry spokeswoman Shushan Stepanyan said that Armenian forces successfully repelled the attack, inflicting heavy casualties on the Azerbaijani commandos.

Armenian officials said following the botched nighttime raid, the Azerbaijani military began shelling several Armenian villages along the border early on Thursday morning, targeting civilian infrastructure, including a kindergarten. A drone attack injured a civilian and another drone targeted a vehicle belonging to Armenia’s Emergency Situations Ministry that came to the aid of the injured man, Armenian officials said. 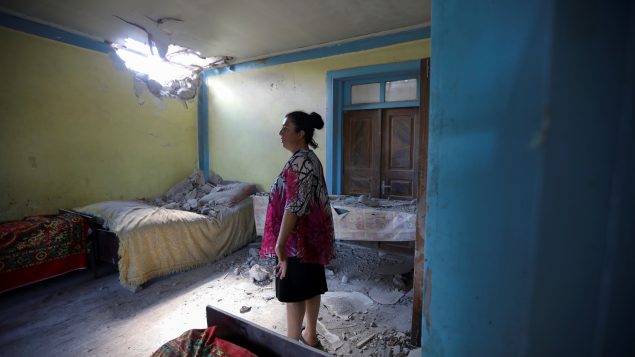 A woman stays in a house, which locals said was damaged during a recent shelling by Armenia’s forces, in armed clashes on the border between Azerbaijan and Armenia, in the village of Dondar Quschi, Azerbaijan July 15, 2020. (Aziz Karimov/REUTERS)

Skirmishes on the volatile border began Sunday, and had claimed at least 16 lives by Tuesday. Azerbaijan said it has lost 11 servicemen and one civilian in three days of fighting, and Armenia said four of its troops were killed Tuesday and 20 servicemen injured since Sunday.

“Canada is concerned by the violence along the Armenia-Azerbaijan border,” Foreign Affairs Minister Francois-Philippe Champagne said in a statement late Wednesday evening.

“Alongside the Organization for Security and Co-operation in Europe’s Minsk Group, Canada urges both sides to refrain immediately from using force, to respect the ceasefire and protect civilians.”

‘We have been living under the constant, every day threat’

Bishop Bagrat Galstanian, a Canadian who heads the Armenian Diocese in the northeastern region of Tavush, the epicentre of the recent fighting, said indiscriminate artillery fire and drone attacks by Azerbaijani forces targeted not only villages on the border but also settlements further away.

“Right now the situation is relatively peaceful,” Galstanian told Radio Canada International in a phone interview from the town of Berd, about 12 kilometres west of the border with Azerbaijan.

“But there was fighting all throughout night and throughout the morning the Azeri forces fired at villages, civilians, a kindergarten and we had some casualties within the civilian population.” 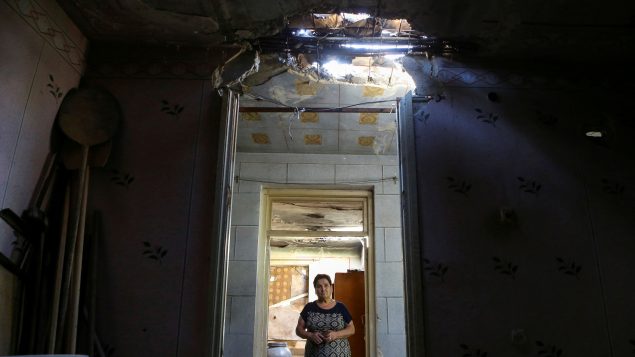 A woman stays inside a house, which locals said was damaged during a recent shelling by Azerbaijani forces, in armed clashes on the border between Azerbaijan and Armenia, in the village of Aygepar, Tavush Province, Armenia July 15, 2020. (Hayk Baghdasaryan/Photolure via REUTERS)

The international community must unequivocally condemn these kinds of actions by the Azerbaijani military, he said.

“We have been living under the constant, every day threat… They are just shooting and firing and the threat of death is always hanging over our civilians,” said Galstanyan, who’s been touring the border villages of his diocese since the fighting erupted on Sunday.

There can be no equivalency between the actions of the Armenian and Azerbaijani governments, Galstanyan said.

Sevag Belian, executive director of the Armenian National Committee of Canada, an NGO that represents the interests of the Canadian-Armenian community, said they’ve been in constant contact with officials at Global Affairs Canada, the foreign minister’s office and Canadian parliamentarians to offer them updates on the situation.

While the ANCC appreciated Champagne’s call for the cessation of hostilities and return to the negotiations, they urge the Liberal government to “properly condemn Azerbaijan’s aggression towards Armenia,” Belian said.

“We noted that failing to distinguish between the aggressor and the victim will further empower the dictatorial military and political regime of Azerbaijan to commit its crimes and continue destabilizing the region,” Belian told Radio Canada International.

Radio Canada International reached out for comment to the Azerbaijani Canadian Association but did not receive a comment in time for publication.

Threat of a full-scale war involving Turkey and Russia 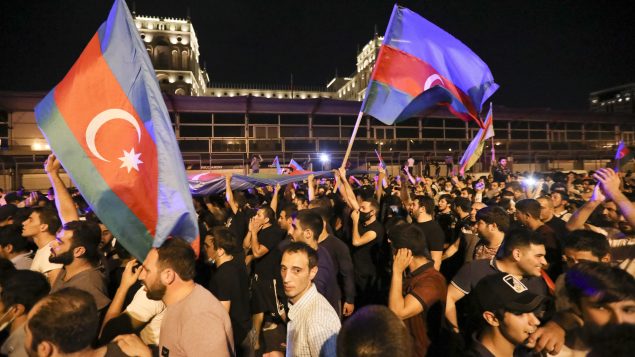 Belian also called on Canada to condemn its NATO ally Turkey’s position in the conflict.

Turkey, which has close ethnic and cultural ties with Azerbaijan, has voiced strong support to Baku in the conflict. On Thursday, Turkish Defense Minister Hulusi Akar met with Azerbaijan’s deputy defense minister and air force commander, Ramiz Tahirov, in Ankara and condemned “the vile attack” on Azerbaijan.

“They (Armenians) will be crushed and drown in this plot they have created and they will definitively pay for what they did,” Akar said after the meeting. “We will continue to stand with our Azerbaijani brothers in the face of such attacks, as we have always done.”

Several experts have warned of the danger of the relatively localised border skirmish escalating into a full-scale war between Armenia and Azerbaijan that has the potential of drawing in Turkey and Russia, which has a large military base near Armenia’s border with Turkey and has a treaty obligation to defend its ally.

Armenia and Azerbaijan have long been in conflict over Azerbaijan’s breakaway, mainly ethnic Armenian region of Nagorno-Karabakh. But the latest flare-ups broke out more than 100 kilometres away from the enclave.

Ethnic Armenians in Nagorno-Karabakh declared independence during a conflict that broke out as the Soviet Union collapsed in 1991.

Though a ceasefire was agreed in 1994, a resolution to the Nagorno-Karabakh conflict has eluded the two South Caucasus neighbours, leading to occasional flare-ups of fighting.

Azerbaijan’s President Ilham Aliyev sacked his long-time foreign minister on Thursday after accusing him of “meaningless negotiations” with Armenia over the fate of Nagorno-Karabakh and for failing to show up for work when the fighting broke out on Sunday.