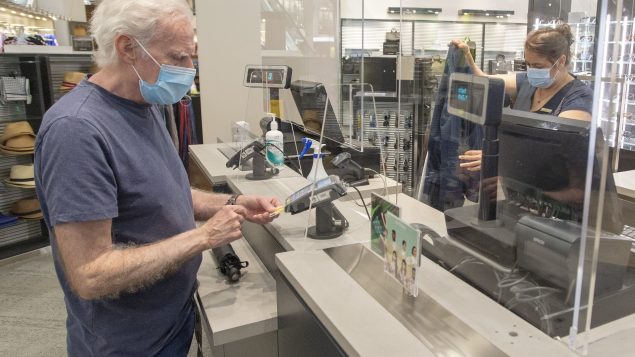 A customer pays for a purchase at Simon's department store as many non-essential businesses were allowed to re-open Monday May 25, 2020 in Montreal. (Ryan Remiorz/THE CANADIAN PRESS)

Inflation pulls back into positive territory with 0.7% increase in June

After flirting with deflation for two month, Canada’s consumer prices rebounded sharply in June, pulling the annual inflation rate out of negative terrain to 0.7 per cent on a year-to-year basis, Canada’s national statistics agency reported Wednesday.

The consumer price index (CPI) had registered two months of negative readings leading up to June, first with 0.2 per cent annualized decline in April, then a further 0.4 per cent drop in May.

But the numbers released by Statistics Canada on Wednesday morning showed that prices rose in five of the eight major components in June on a year-over-year basis. Food and shelter prices contributed the most to the increase in the CPI, according to the report.

“Shelter costs in particular provided a surprise,” Mendes wrote in a research note to clients. “While mortgage costs continued to fall, in line with the interest rate environment, rent prices moved higher, as did electricity prices.”

Clothing and footwear stores benefited from the reopening, as many bricks-and-mortar shops were able to welcome customers again, Mendes said.

Prices for recreation were also supported by the reopening, with travel services, one of the hardest hit during the shutdowns, gaining from more Canadians being out and about, he added. 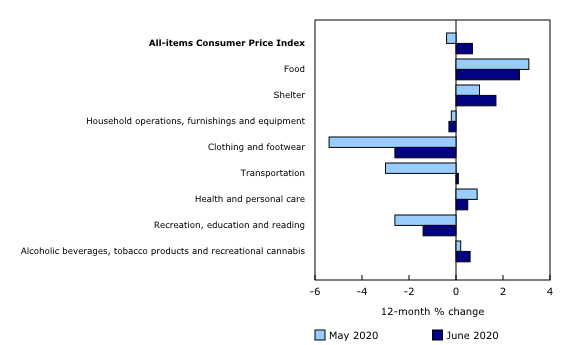 Bank of Montreal economist Doug Porter noted that while June numbers presented a big shift from two months of headline deflation, they are still below the bottom end of the Bank of Canada’s “comfort range for inflation” of 1 to 3 per cent.

“The sudden snap-back in CPI is a glass-one-third full, two-thirds empty story,” Porter wrote in a research note.

“After printing some of the lowest inflation readings in the world during the shutdown, Canada has suddenly bounced a bit above many major economies (U.S. CPI inflation was 0.6 per cent in June).”

Still, whatever the measure, inflation remains well below target, he added.

“Looking further ahead, we suspect inflation likely ticked up a bit further in July as more businesses re-opened and faced higher costs along with pent-up demand,” Porter wrote.

“Whether this ultimately leads to true, lasting inflation is still very much an open debate; we tend to think ‘no’, but that answer may well depend on just how far fiscal policy will need to go to support the economy in the year ahead, and that ultimately depends on the path of the virus.”