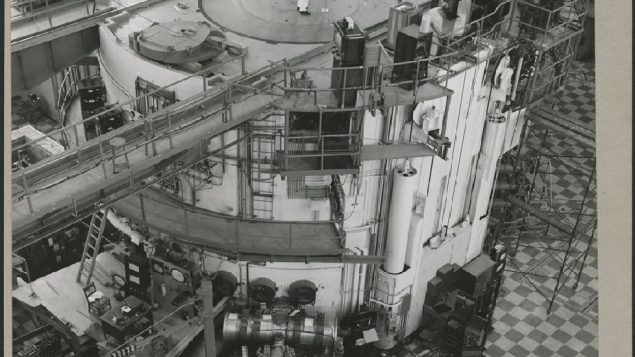 1955 The NRX reactor, a world's first at the Atomic Energy of Canada Ltd. operation in Chalk River, Ontario (LAC Mikan 4313515)

Canada was among the pioneers of nuclear energy from the very beginning. This began with the perhaps now slightly dubious honour of initial research into nuclear weapons during the Second World War when British-Canadian research was carried out in Montreal prior to moving to the U.S.

In September 1945 Canada’s first nuclear reactor, the very small Zero Energy Experimental Pile (ZEEP) became operation at 1 watt (thermal). It was used to demonstrate the theory that plutonium could be  extracted from heavy water and uranium, for use in military applications.

The location near Deep River about 180 kilmetres north west of Ottawa. Chalk River Laboratories would go on to become the hub of nuclear energy research.

However it was on this date in 1947 that a much bigger and more sophisticated design became operational heralding the future of Canadian nuclear energy development. The National Research Experimental reactor (NRX) began operating at 10 megawatts, This was a full scale heavy water reactor, a world first and put Canada up in the nuclear leaders with the U.S. and Britain.

The research effort operated under the National Research Council until 1952 and the creation of the Atomic Energy of Canada Ltd. (AECL) to promote the peaceful use of nuclear power. That same year however NRX suffered a major accident due to both mechanical and human error causing it to overheat resulting in hydrogen explosions which damaged the reactor and building. It took two years before the reactor was operational again.

NRX would continue to operate until 1992 when it was permanently shut down and decommissioned in 1993..

However it had been the basis for the successful energy reactor design, first promoted in a demonstration reactor in 1954 after a collaboration among  AECL, Ontario Hydro, and Canadian General Electric. In 1958 the name CANDU was chosen for the design (Canadian Deuterium Uranium), a design which would be sold to several countries around the world. 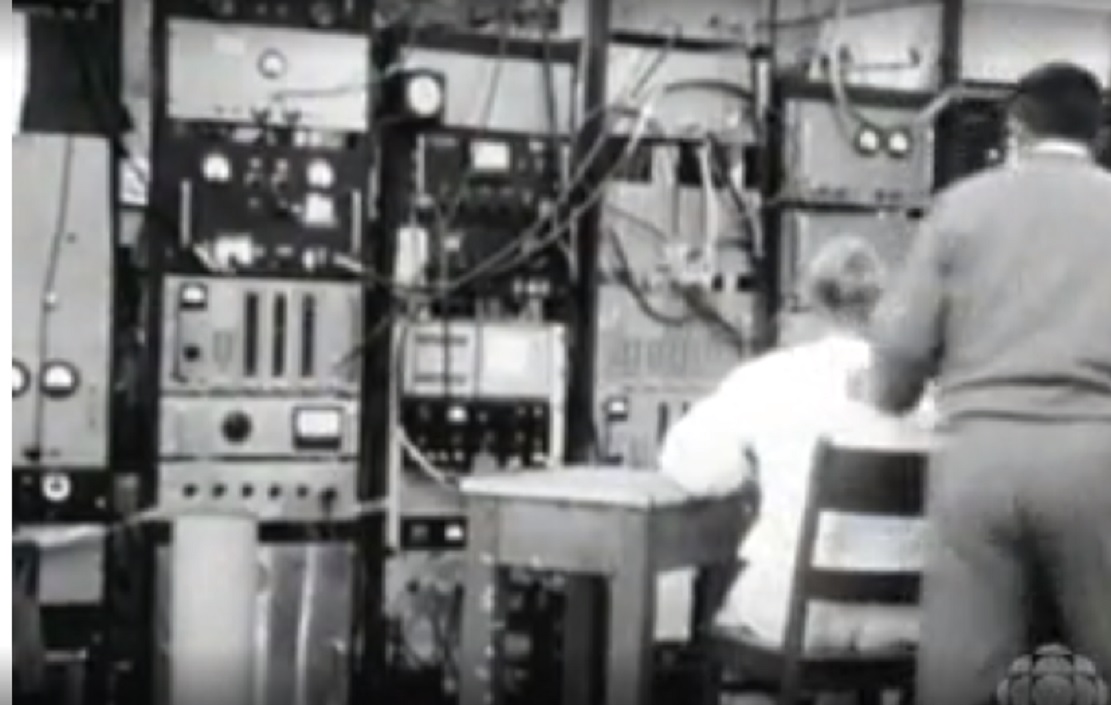 Reactor monitoring and control circa 1955. with technician at a simple wooden desk and chair. (CBC archives)

In 1957 another reactor, the National Research Universal (NRU) reactor became operational would go on to provide some 40 per cent of the world’s supply of medical isotopes and also instruct in the design of the CANDU reactors. It’s estimated that research and products from Chalk River have saved millions of lives.

Canada’s nuclear programme has not been without contention though. In it’s history Chalk River has supplied nuclear material to the U.S. military and in 1974 India detonated a nuclear bomb using plutonium material developed from a Canadian donated research reactor in 1956 and CANDU reactors sold in 1963 and 1966. Canada had said the reactors could only be used for peaceful purposes and was internationally embarrassed and criticized over the situation. Canada had also sold a reactor to Pakistan in 1959, and a CANDU in 1964. After the Indian bomb, Canada asked Pakistan to promise not to use the technology to build a bomb. Pakistan refused. The Nuclear Non-Proliferation Treaty had been introduced in 1968 and became international law in 1970 signed by 187 nations> At the ime only the U.S, U.K, USSR, France and China had nuclear weapons. India, Pakistan, and Israel did not sign.

The issue of dealing with waste material from nuclear reactors however has always been contentious and Chalk River is no exception with decades of low level radiation waste. This will be contained in what is labelled as a ‘near surface facility’. Various metal tubes and other nuclear wastes from Chalk River and renovations at other federally regulated sites are estimated to cost between seven and eight billion dollars.