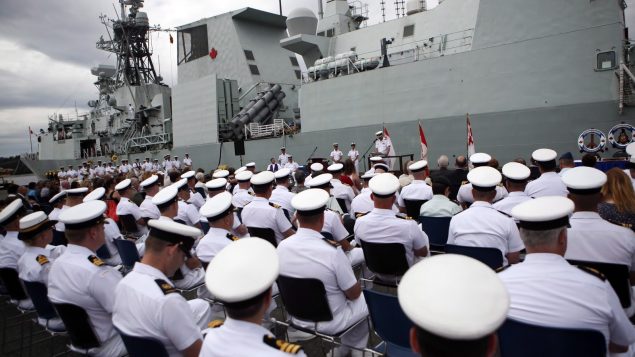 The Deputy Commander of Canadian Royal Canadian Navy responded to the criticisms of the navy’s plan to replace the term “seaman'' from their ranks with something that is more inclusive, and called out racist, hateful, and misogynist comments.  (The Canadian Press/Chad Hipolito)

The Deputy Commander of Canadian Royal Canadian Navy took to Facebook on Friday to call out racist, hateful, and misogynist comments made in response to the navy’s plan to replace the term “seaman” from their ranks with something that is more inclusive.

“I am shocked that you think that your comments would be acceptable, and that you are not able to recognize that those you are disparaging are the very people dedicating their lives to afford you the freedom to comment,” Rear Admiral Chris Sutherland said.

“These comments serve as a reminder of our need to call out cowardly attacks such as these, and remind us also that we should take every opportunity to show support for minority and marginalized groups.”

Sutherland, who has been in service for 33, also stated that anyone currently serving with racist, hateful, and misogynistic beliefs, has no place in the navy.

“If you cannot live by or support the values of the Canadian Charter of Rights and Freedoms, then you cannot defend them,” he said.

Sutherland apologized for not saying anything earlier, “but frankly I needed a minute to come to terms with some of the comments that have been posted.”

Earlier this month, the Royal Canadian Navy said that they were looking at replacing the term “seaman” with something that is gender-neutral.

One of the options is to use the term “sailor” for existing ranks instead of “seaman,” which means ranks would become “able sailor” and “leading sailor.”

Another option would include changing rank names such as “able” and “leading” to sailor 2nd class, and sailor 1st class.

Sutherland said that he strongly supports the initiative to change the name of the rank and that it is long overdue that all Royal Canadian Navy processes and policies, including ranks, reflect, honour and recognize and service by all of the navy’s sailors.

Members of the navy and the general public can vote on the alternative names until Friday, July 31.