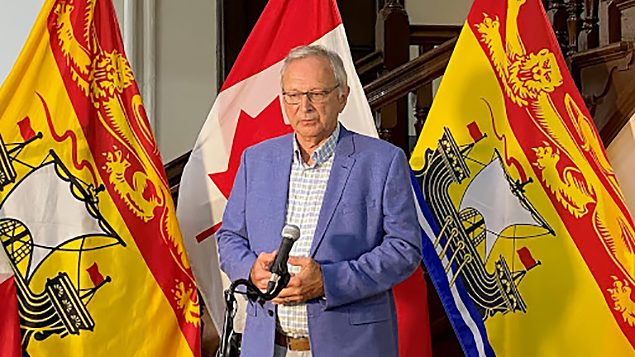 New Brunswick will allow Quebecers who live in two areas near the New Brunswick border to visit the province for day-trips starting Aug 1, if they pre-register. New Brunswick Premier Blaine Higgs speaks to media during a press conference in Fredericton on Thursday, July 30, 2020. (The Canadian Press/Kevin Bissett)

New Brunswick is opening the province to some regions along the border it shares with Quebec starting on Aug. 1, according to an announcement from New Brunswick Premier Blaine Higgs on Thursday.

Pre-registration for the day trips are mandatory as registration cannot be done at the border, and any traveller that has not pre-registered for a day trip will be turned away in order to keep traffic flowing.

The travel bubble is only expanding to those select regions in Quebec, Higgs said.

Higgs had previously talked about expanding the Atlantic bubble, which consists of New Brunswick, Nova Scotia, Newfoundland and Labrador, and Prince Edward Island, to the Gaspé region of Quebec by July 17, but later said that more time was needed to prepare.

With files from CBC News and Bobbi Jean MacKinnon