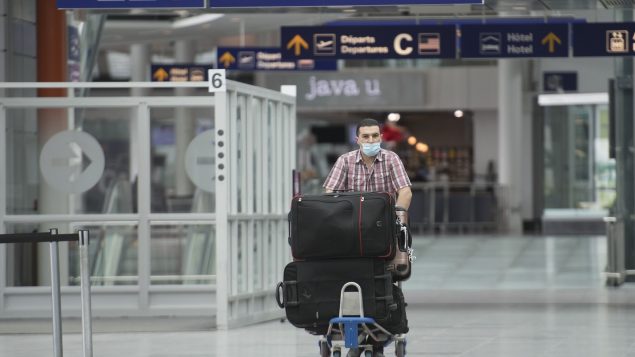 A passenger wears a mask as he walks through Montreal-Pierre Elliott Trudeau International Airport, Saturday, May 16, 2020. Starting on Thursday, all passengers going through security at Canada’s four biggest airports have to take part in a temperature check. (The Canadian Press/Graham Hughes)

Starting on Thursday, all passengers going through security at Canada’s four biggest airports have to take part in a temperature check, according to a tweet from Transport Canada.

In June, the Canadian government announced a plan to introduce mandatory temperature checks in a phased manner.

“Mandatory temperature screenings are yet another measure in our multi-layered approach to help protect the safety of the travelling public and air industry workers,” Canada’s Transport Minister Marc Garneau said at the time.

Up until now, the Canadian government only mandated temperature checks for all passengers travelling to Canada from international points of departure.

For the next phase, Transport Canada said that by September, temperature screening stations will be in place in the departure areas of Canada’s next 11 busiest airports; St. John’s, Halifax, Quebec City, Ottawa, Toronto’s Billy Bishop airport, Winnipeg, Regina, Saskatoon, Edmonton, Kelowna, and Victoria.