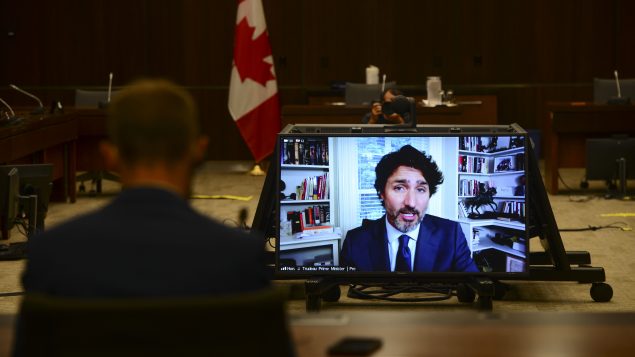 Prime Minister Justin Trudeau appears as a witness via videoconference during a House of Commons finance committee in the Wellington Building on Thursday, July 30, 2020. The committee is looking into Government Spending, WE Charity and the Canada Student Service Grant. (Sean Kilpatrick/THE CANADIAN PRESS)

Trudeau says he did ‘absolutely nothing’ to influence WE Charity contract

Prime Minister Justin Trudeau is denying any role in influencing a decision to award a multi-million contract to administer a student volunteering grant program to WE Charity even as he acknowledges that he should have recused himself from cabinet discussions on the matter given his ties to the charity.

Testifying before the House of Commons Finance Committee on Thursday, Trudeau said he only learned that WE Charity was being proposed to deliver the $912-million Canada Student Service Grant (CSSG) on May 8, hours before a cabinet meeting.

“WE Charity received no preferential treatment. Not from me, and not from anyone else,” Trudeau said in his opening remarks.

“The public service recommended WE Charity and I did absolutely nothing to influence that recommendation.”

Trudeau said he never spoke to his staff about WE Charity or its proposed involvement in administering this program until May 8.

“I also never spoke to Craig or Mark Kielburger, or anyone at WE Charity, about the CSSG,” Trudeau added. “I did not speak to either of them at all during this period.” 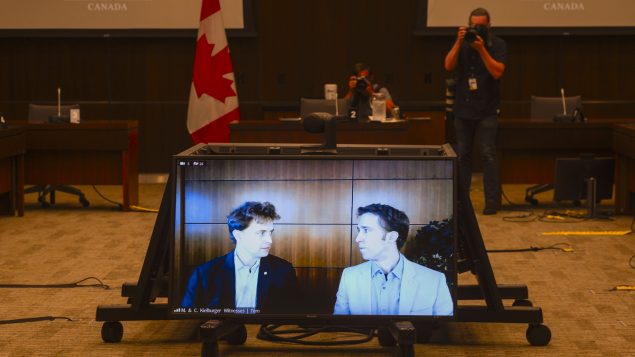 Marc Kielburger, screen left, and Craig Kielburger, screen right, appear as witnesses via videoconference during a House of Commons finance committee in the Wellington Building in Ottawa on Tuesday, July 28, 2020. The committee is looking into Government Spending, WE Charity and the Canada Student Service Grant. (Sean Kilpatrick/THE CANADIAN PRESS)

In fact, he said his expectation before he was briefed was that the Canada Service Corps would help deliver the program.

“The Service Corps is an important and long-standing part of our national youth strategy and I knew that making it responsible for the CSSG would accelerate its development,” Trudeau said.

“Ultimately, however, the public service concluded that delivering the CSSG required a third-party partner, external to the government, and that WE Charity should act as that service provider.”

Trudeau said given his and his family’s connection to the charity, he wanted to make sure that there was no appearance of conflict of interest.

“We knew that the selection of WE Charity would be closely scrutinized,” Trudeau said.

“We wanted to make sure that the process and decision were the best possible in the circumstances.”

Watch: Trudeau says he only learned of WE proposal on May 8:

In his opening statement Prime Minister JustinTrudeau said he had expected the Canada Service Corps would deliver the Canada Student Service Grant, and first learned on May 8 that WE Charity was being proposed to deliver the program. 3:25

Trudeau said he decided to pull the CSSG proposal from the cabinet agenda for May 8 so that further work could be done.

“My primary concern was to make sure that the public service could fully support its recommendation that without a doubt, WE Charity was the right – indeed only – partner to deliver the program,” Trudeau said.

Trudeau said he was briefed again on May 21 and government officials told him that they had done their due diligence and were confident in the recommendation.

“In effect, they said that if we wanted this program to happen, it could only be with WE Charity,” Truideau said.

Given the public service advice, Trudeau said he was comfortable that the CSSG could now be presented to the cabinet, which approved it on May 22.

Trudeau said he’d never been paid for his speaking engagements at various WE Charity events over the years.

His wife had an unpaid role as a WE Charity ambassador and ally, Trudeau said. The organization had covered her expenses whenever she travelled to get a WE Charity event, he added.

The Ethics Commissioner had approved her role as WE Charity ambassador and mental wellness podcast host, Trudeau said.

Trudeau said he also knew that his brother and mother had worked with WE Charity but added that he did not know how much work either of them had done with the charity, or how much they’d been paid.

In fact, over the years, Trudeau’s mother and brother had been paid nearly $300,000 for their speaking engagements with the charity, it emerged.

“These were things that I would only learn after the program launched publicly,” Trudeau said.

“That said, sometimes recusing oneself can be the right thing to do, even if it’s not required.”

Trudeau faced a barrage of questions from members of the opposition over the decision.

New Democratic Party ethics critic Charlie Angus questioned Trudeau about the conclusion that WE was the only group that could deliver the program in Canada.

“The fact is the Kielburger brothers carefully cultivated their relationship with you and your brand after you became prime minister,” Angus said.

Trudeau shot back that WE Charity was not selected by cabinet.

“Cabinet was presented a choice by our professional public service, saying, ‘if you want to deliver this summer volunteer program it’s going to have to be with this third party organization,’” Trudeau said. “They didn’t give us a choice of two or three different organizations.”

“It’s time for the prime minister to stop blaming the public service,” Poilievre said. “He is an elected official who is accountable to Canadians.”

Both the Conservatives and the separatist Bloc Quebecois have called on Trudeau and his Finance Minister Bill Morneau to resign as a result of the WE Charity controversy.

Trudeau’s chief of staff Katie Telford was slated to testify after the prime minister.