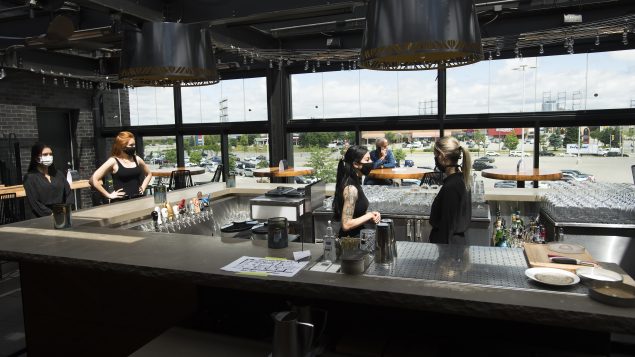 Bartenders and waiters wait the lunch hour rush as patrons sit on the patio at Joey Sherway, part of the Joey Restaurant chain during the COVID-19 pandemic in Toronto on Wednesday, June 24, 2020. In July, as the continued easing of COVID-19 restrictions allowed Canadians to return to restaurants and outdoor patios, employment rose by 101,000 (+12.3 per cent) in accommodation and food services, the third consecutive monthly increase. (Nathan Denette/THE CANADIAN PRESS)

Statistics Canada said the country’s unemployment rate in July dropped to 10.9 per cent from the 12.3 per cent recorded in June..

“The pace of increase in employment slowed in July relative to the prior month, and that’s likely to become a trend as the pace of easing in restrictions also slows down and the number of Canadians on temporary layoff falls,” CIBC senior economist Royce Mendes wrote in a note.

“The good news is that with virus cases low in Canada at the moment, the country isn’t facing an immediate risk of having to tamp down activity again.”

Most employment gains in July were in part-time work, which increased to the tune of 345,000 positions, while full-time positions increased by 73,000.

Job gains were sprinkled across most sectors, but the biggest gains were seen in the areas that had been shut down the hardest.

“However, even then, it’s clear that fully recouping the shutdown losses will be a much lengthier affair, and the gains will be harder to come by now,” Porter wrote in a research note.

“True, with 55 per cent of the initial job losses now reversed, there are going to be some quite impressive-looking economic figures in the weeks ahead; but regaining the remaining 45 per cent of job losses (i.e., just over 1.3 million jobs to go) is the big challenge.”