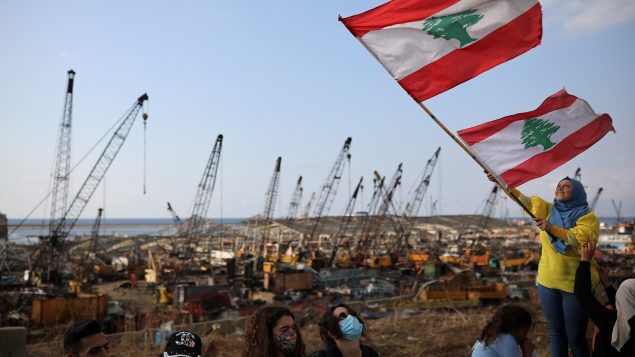 A demonstrator waves the Lebanese flag during protests near the site of the blast at the Beirut's port area, Lebanon Aug. 11, 2020. (Alkis Konstantinidis/REUTERS)

Prime Minister Justin Trudeau says Canada will be providing an additional $25 million in assistance for the “people of Lebanon” following last week’s explosion in Beirut that killed at least 171 people, injured 6,000 and left hundreds of thousands homeless.

In a communique released by the Prime Minister’s Office on Monday, Trudeau said the additional funding will help trusted partners address immediate humanitarian needs and support efforts for early recovery.

The federal government also will continue to match donations from Canadians through the Lebanon Matching Fund, up to a new expanded maximum of $5 million, Trudeau said. The previous matching fund limit had been set at $2 million, drawing criticism from members of the Lebanese-Canadian community.

“I join Canadians across the country to mourn those who were lost in last Tuesday’s tragic explosion in Beirut, and to offer sincere condolences to their families and friends as they grieve this tragedy,” Trudeau said in a statement.

“I also encourage Canadians to donate to the Lebanon Matching Fund, and we will continue to match your generous donations. Together, we can support the people of Lebanon as they work to heal and rebuild.”

The new announcement adds to the $5 million in humanitarian assistance that Canada provided for Lebanon last week, including an initial $1.5 million given immediately to trusted humanitarian organizations such as the Lebanese Red Cross, Trudeau said. 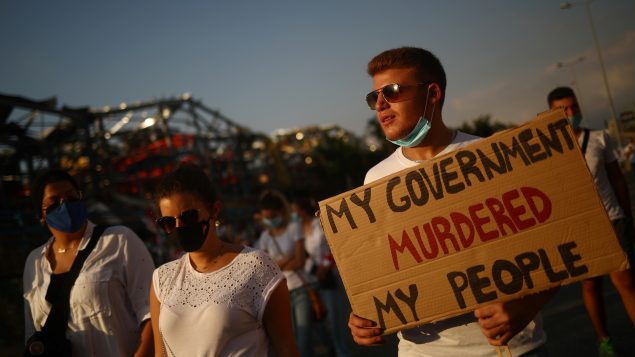 People take part in a vigil for the victims lost in a massive explosion, in Beirut, Lebanon August 11, 2020. (Hannah McKay/REUTERS)

The announcement by Ottawa on Monday came as Lebanese Prime Minister Hassan Diab announced his cabinet’s resignation, blaming endemic graft for the explosion, the biggest in Beirut’s history.

The blast has compounded a deep financial crisis that has collapsed Lebanon’s currency, paralysed the banking system and sent prices soaring.

Michael Messenger, President and CEO, World Vision Canada, said Ottawa’s decision to increase the Lebanon Matching Fund could not have been more timely.

“Canadians have already shown incredible support for aid efforts, and this will further encourage giving,” Messenger said in a statement.

“Lebanon is already facing a triple crisis of economic and political instability, a large number of refugees and, most recently, COVID-19.” 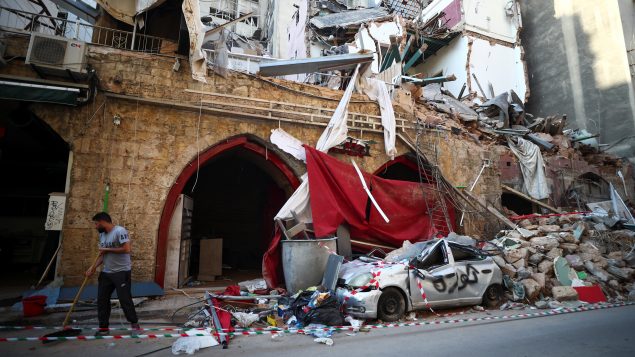 A man sweeps debris from a street near a damaged area in the aftermath of a massive explosion in Beirut, Lebanon Aug. 11, 2020. (Hannah McKay/REUTERS)

Messenger said donations will allow World Vision and other members of the Humanitarian Coalition to provide desperately needed food, clean water, shelter and psycho-social support to those who need it most.

Jessica Capasso, director of emergency and humanitarian assistance at Plan International Canada, said even before the explosion, nearly half of the population of Lebanon was living below the poverty line and the threat of COVID-19 was deeply impacting people’s health and economic futures.

The explosion at Beirut’s port, one of few entry points to a country that heavily relies on imports, has cut off a vital pathway to receive food and critical supplies, she said.

“The impact of this crisis will be felt for years,” Capasso said.

International Development Minister Karina Gould said the federal government is sending a clear message to the Lebanese people that Canada will not only be there for them for the immediate response to the tragedy, but also for the rebuilding efforts over the long-term.

“We are ready to do more and we will ensure that our investments go directly to communities affected,” Gould said.

Canadians interested in supporting humanitarian action on the ground in Beirut through the Lebanon Matching Fund can donate to the Humanitarian Coalition or one of its members by Aug. 24, 2020.