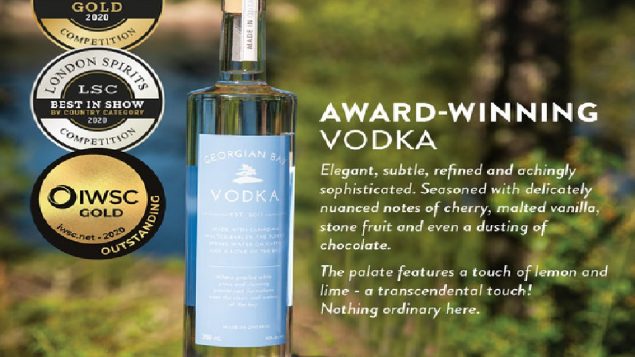 A newcomer in the distillery business is already among the world's best. Georgian Bay Spirit has won top international awards for its vodka and gin (via CNW)

There are about 100 countries producing vodka, and probably in the neighbourhood of 1,000 brands. Typically considered a Russian drink, with some Polish roots as well, a small Canadian upstart has appeared on the world scene.

Georgian Bay Spirit Co, was started only a few years ago first making gin, and only later vodka but now their Georgian Bay Vodka ranks with the best in the world.

It began with a gold win in 2016 at the San Francisco  World Spirits Competition with a double gold for the vodka and a silver for their gin.

At the London Spirits Competition earlier this year, the Canadian vodka was again a gold medal winner. This was followed by a tasting at the International Wine and Spirits Competition,other gold medal with flowery praise for the vodka as being ” elegant, subtle, refined and achingly sophisticated. Seasoned with delicately nuanced notes of cherry, malted vanilla, stone fruit and even a dusting of chocolate. The palate features a touch of lemon and lime- a trancendental touch! Nothing ordinary here”

This month the influential Forbes magazine listed the tiny distiller among the top ten vodka makers in the world. Canada was listed twice in the article as the large commercial operation Hiram Walker and Sons of Windsor Ontario was also listed among the world’s best vodkas with their Polar Ice vodka.

Vodka is made from any product that produces starch or sugar, such as potatoes, or more often from corn and wheat. Often mistakenly credited to Russian chemist Dmitri Mendeleev, creator of the periodic table of the elements. According to Montreal chemist, professor, and broadcaster Joe Schwarz, that idea came from a Russian brand called ‘Russian Standard” who claimed the 80 proof  alcohol standard for vodka came from the Russian scientist.

Credit should actually go to a Russian peasant. Pyotr Smirnov in the late 1800’s who popularized the drink with trained bears who would drink his vodka, (which frankly seems a tad dangerous). The Czar saw the bears at a festival and talked about it among the Russian elite which immediately popularized the drink.

Smirnov became rich but only a few years after his death, vodka production was nationalised/ The family remained in Moscow, but as elites, had to flee from the Bolshevik revolution in 1917.   The brand has since gone through several owners but is now among the most popular in the world.

As for Georgian Bay Spirit, in a new plant in Collingwood, Ontario, their award-winning vodka may be due in part to the water used from the Elmvale acquifer which they describe as ‘the purest water in the world”.