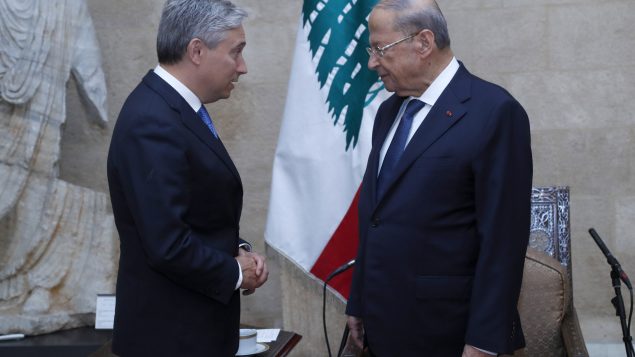 The meeting follows the massive explosion earlier this month that killed up to 200 people, injured 6,000 others, flattened huge areas of the city, resulted in the resignation of Prime Minister Hassan Diab and his government, and brought thousands of protesters into the streets.

Western nations, including Canada, have been demanding major reforms in Lebanon in return for help and some countries have been sending aid directly to the people rather than state institutions notorious for corruption.

Champagne did not diverge from the message today.

“Everyone understands that the international aid must be accompanied by serious reforms,” he said. 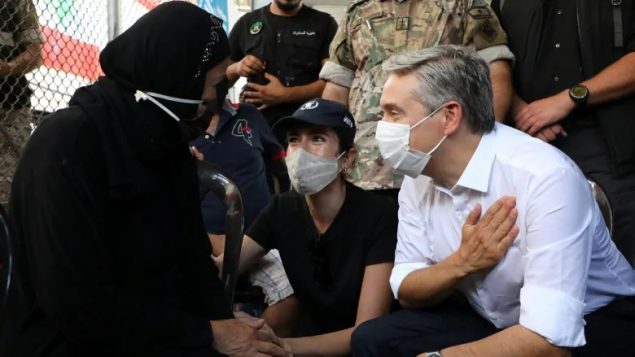 Champagne gestures as he meets with a woman affected by the massive blast in Beirut’s port area, at a World Food Program (WFP) distribution site in Beirut on Thursday. (Mohamed Azakir/Reuters)

Before taking a close-up look at the burned-out hulk of the city’s devastated port, Champagne told Michel Aoun that Canada is ready to join Lebanon’s investigation into the explosion if certain conditions are met.

“The Lebanese people expect that if Canada participates in this investigation it is because it is going to be credible, transparent and get to the bottom of things to get justice,” Champagne said in televised remarks.

“I just finished my meeting with (Aoun),” Champagne tweeted afterwards

“I reaffirmed Canada’s solidarity with the people of Lebanon. We spoke about the path forward & the reforms necessary for Lebanon’s sustainable recovery.” 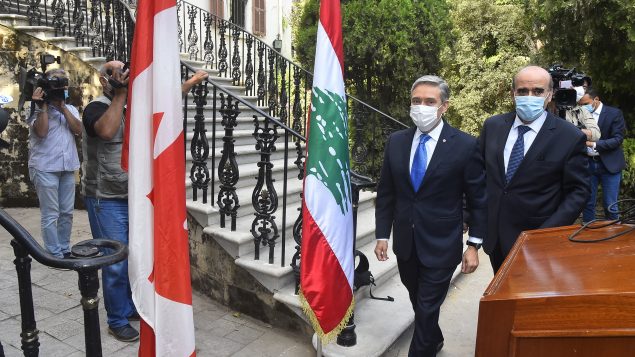 Earlier this week, Champagne told The Canadian Press that Canada was willing to commit the RCMP to work alongside French national police and the FBI in an independent investigation of the explosion, adding that any law-enforcement help from Canada would have some very important strings attached — it would have to be credible, transparent and thorough.

Meanwhile, the Lebanese presidency quoted Aoun telling the French magazine Paris Match that 25 people “directly or indirectly involved with the port” had so far been detained under the investigation, which Aoun said would be transparent and hold to account “all those negligent without exception”

Following his meeting with Aoun, Champagne posted a video on Twitter from the scene of the explosion.

I am here in the port of #Beirut to survey the horrific damage from the explosion. Canada stands with the people of #Lebanon.

“You can smell destruction. You can feel destruction, you can see also the resilience of the Lebanese people,” the minister said.

“We have said we will be there for Lebanon and I can assure you what you’re seeing is only part of the destruction. You cannot even see with your own eyes the size of that destruction.”

In the immediate aftermath of the Aug. 4 explosion, Canada provided $5 million in humanitarian assistance and later announced an additional $25 million. 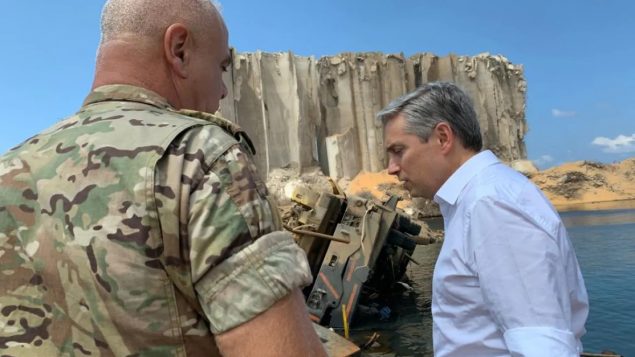 Champagne surveyed damage at the Beirut port on Thursday following the

France’s foreign minister, Jean-Yves Le Drian, said on Thursday that Lebanon risked disappearing due to inaction of its political elite, who had been the target of protests even before the blast because of a financial crisis that has battered the country’s currency.

Canada and Lebanon have long-standing ties and according to the Government of Canada website, “Canada has contributed almost $250 million to support Lebanon’s stability and resilience as it copes with hosting the more than 1.5 million Syrian refugees that have been added to the country’s already existing refugee population, which also includes Palestinians, Iraqis and Kurds. Canada has increased its diplomatic presence in Lebanon, also in response to the crisis.”

According to the 2016 national census, 92,000 Canadians reported that they were born in Lebanon, and 219,555 reported being of Lebanese ethnic origin.

With files from CBC News, The Canadian Press, RCI, Government of Canada