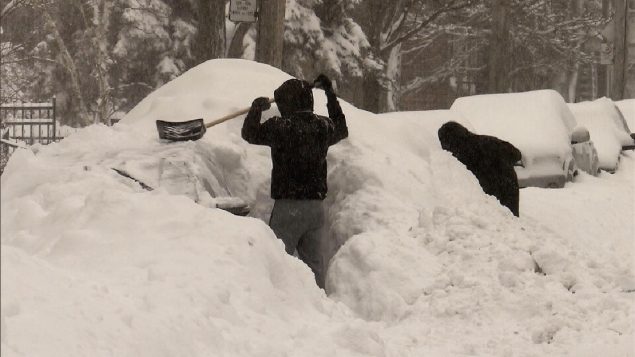 Digging out your car after yet another winter storm, a not uncommon event in much of Canada, and the farmers almanacs both say, central -east Canada could get more than usual snow this winter (Radio-Canada)

Whither the weather this winter in Canada?

The age old Canadian question, what’s the weather going to be like this winter?

For decades prior to the age of the internet, computers, radar, satellites, many people in N. America relied on the Farmers’ Almanac for predictions of conditions in seasons ahead , These weather predictions are even made up to a year ahead of time due to publication deadlines!. This reliance on long distance weather predictions from the small booklet was especially true for farmers and gardener, although the booklets contain lots of other interesting, unusual and humorous information. 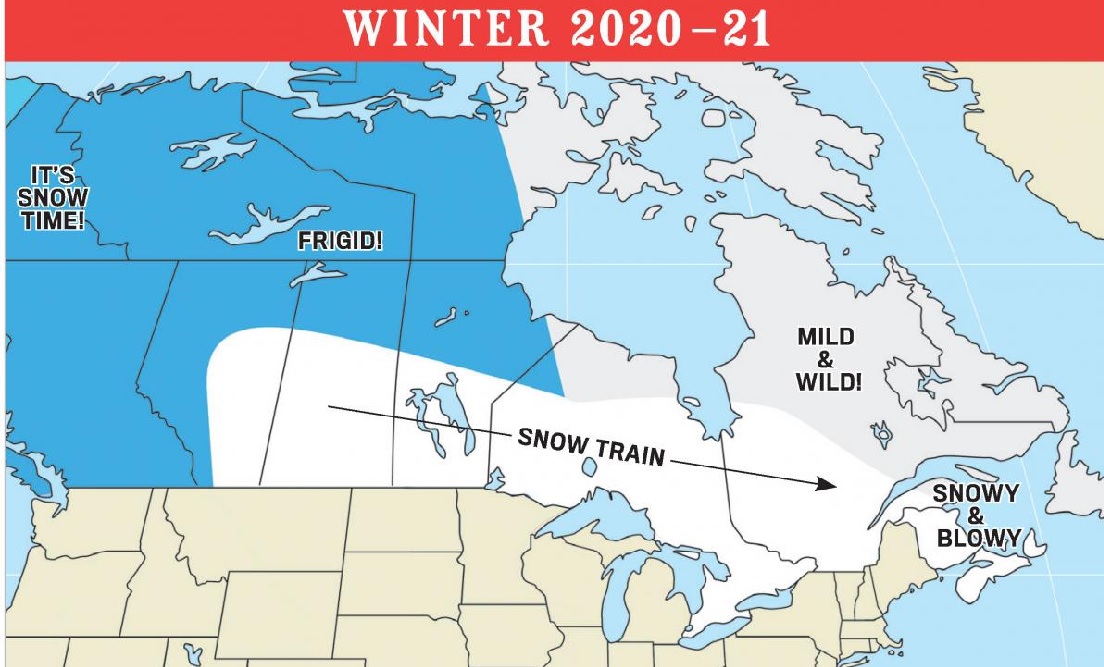 However even now with all the technology, the U.S National Oceanic and Atmospheric Administration’s Climate Prediction Center only likes to predict up to three months ahead, after which it says reliability drops off considerably. although even three months is a stretch.

“Based on our time-tested weather formula, the forecast for the upcoming winter looks a lot different from last year, quite divided with some very intense cold snaps and snowfall.” —Editor Peter Geiger, Philom. Farmers’ Almanac

Not one, but two almanacs

One has to also realise there are two of these ‘old faithful” booklets,  something most people don’t realise due to the similarities in name.

The Farmers’ Almanac, founded in 1818, and The Old Farmer’s Almanac founded in 1792.  Both claim to have secret (and different) methodology for long distance predictions of weather patterns. Both claim a high rate of accuracy, around 80 per cent.

The Old Farmers’ Almanac is perhaps better known in Canada and as to it’s predictions for this coming winter, well a mixed bag as well. 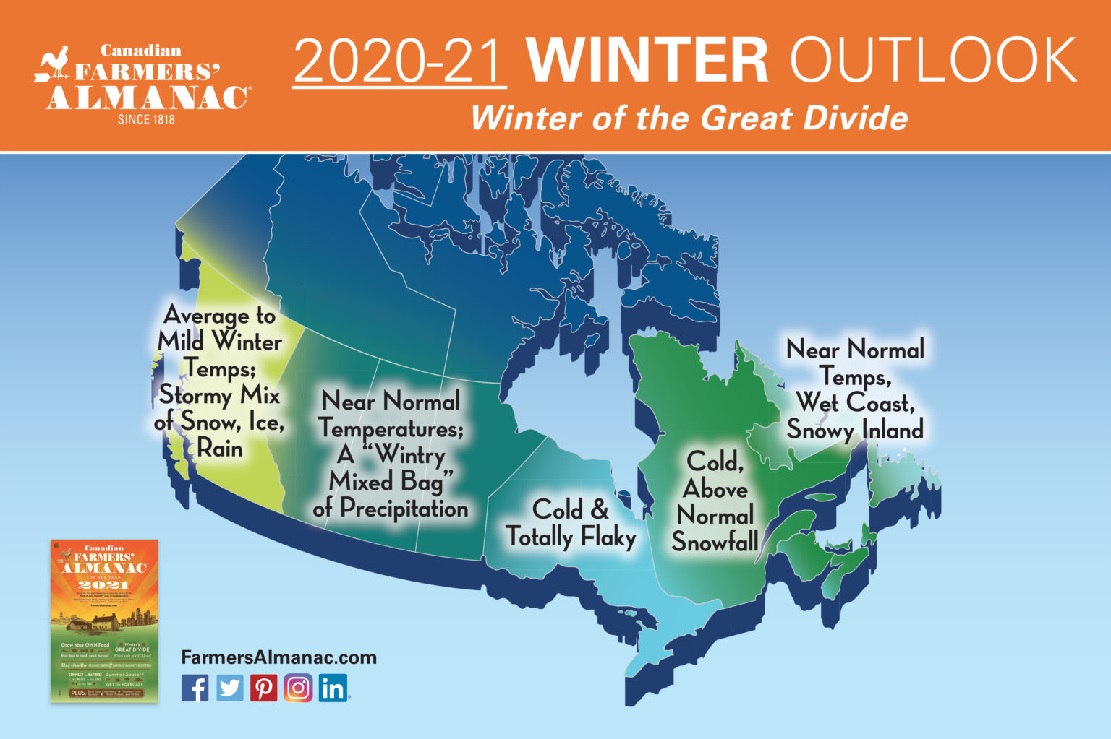 It calls for a chiller winter with below-normal winter temperatures through most of the country except for Atlantic Canada with rain snow and sleet, and the prairies both of which would see some above average temperatures (presumably in the south judging by the map)

Lots of precipitation everywhere, with greater than normal snowfall from Quebec westward through most of the Prairies and close to normal elsewhere. The predicted ‘snow train would bring a series of storms this season from Alberta to Quebec.

As for the Farmers’ Almanac, (Canadian edition), surprisingly not that much difference between the two publications somewhat vague predictions.

As for Canada’s official weather information site, Environment and Climate Change Canada. They’re perhaps a little vague on the winter season, but far more technically so, with a variety of scenarios that probably make more sense to meteorologists and climatologists. 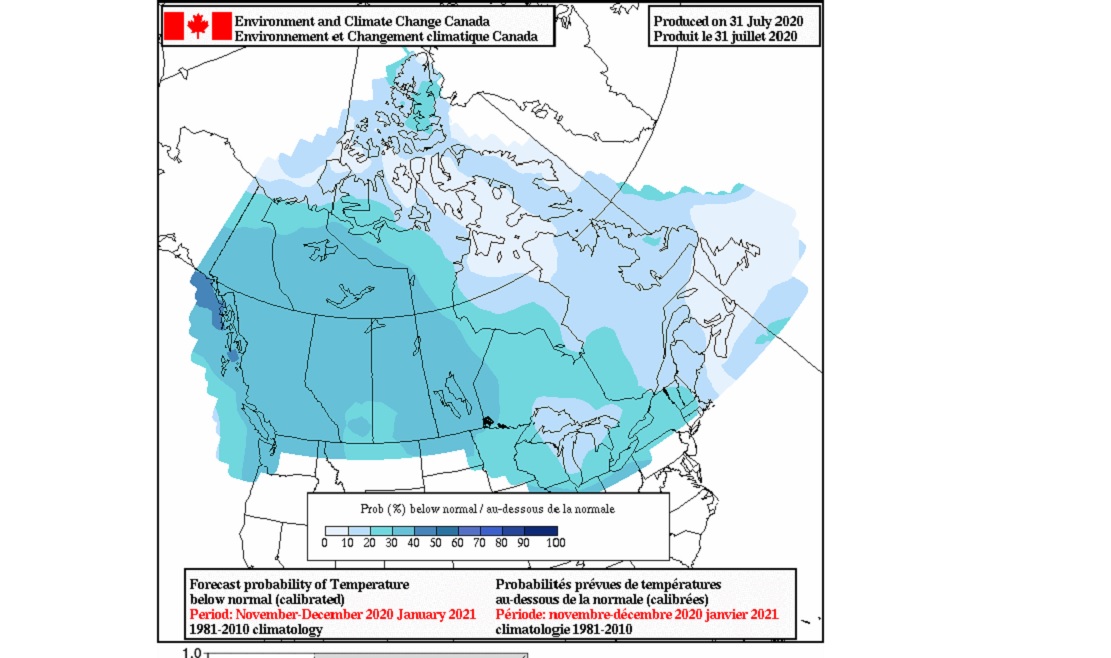 Environment and Climate Change Canada-one of four possible outcomes for Canada this winter, showing probabilities of above normal, normal, near normal, and below normal temperature outcomes. (ECCC)

Basically for this winter in Canada, one can expect it will be almost universally cold whether slightly above or below ‘normal’, except perhaps on the British Columbia coast and Vancouver Island where it gets wet and cool but freezing is not so common.