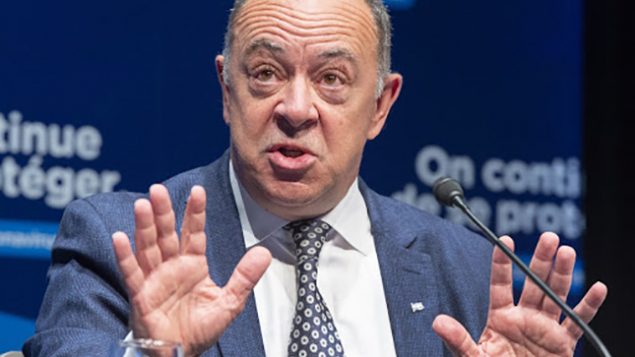 Quebec Health Minister Christian Dube speaks to the media as he unveils a new alert system for affected regions of the province Tuesday, September 8, 2020 in Montreal. (The Canadian Press/Ryan Remiorz)

The province of Quebec introduced a regional COVID-19 alert and intervention system on Tuesday in light of a potential second wave of cases, according to an announcement from the province’s health minister, Christian Dubé.

The alert and intervention system will allow the Quebec government to intervene and deploy measures to slow down transmission of the virus in specific regions to ensure the safety and security of Quebecers when it is needed over the coming months.

According to a press release from the Quebec government, there are four alert levels: Vigilance (green), Early Warning (yellow), Moderate alert (orange), and Maximum alert (red), and health measures are going to be associated with each alert level.

When a region enters alert level yellow, basic health measures are going to be reinforced. An orange alert level would introduce measures such as limiting the number of people private gatherings and a red alert level would indicate a limit on interregional travel and reduced hours for certain commercial sectors.

“With this alert system and regional intervention, our government has found the right balance: ensure the maximum protection of public’s health, while minimizing the impact of measures on our society and economy,” Dubé said in a press release. “This is why we have developed a gradual approach and adapted to the realities of the different regions in Quebec.”

The Quebec government said that the region’s level of alert depends on the epidemiological situation, transmission control and the capacity of the region’s health care system. They added that each region’s alert level will be revised each week by public health officials.

Cases of COVID-19 have been steadily rising in Quebec over the last few days. On Sunday, the province said that there were 205 new confirmed cases of the virus, which was the highest number recorded in three months, and an additional 216 new cases on Monday.

On Tuesday, the province recorded 163 new cases, a small decline when compared to the previous couple of days.