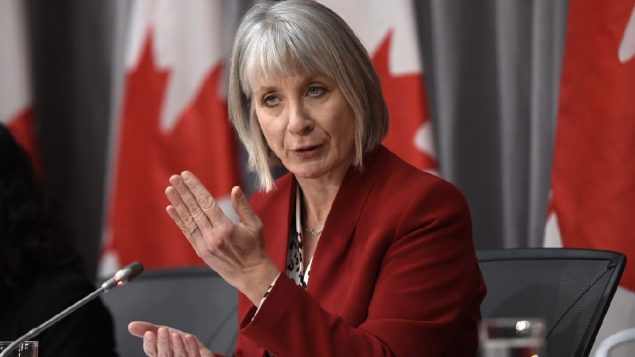 Minister of Health Patty Hajdu speaks during a press conference on COVID-19 in West Block on Parliament Hill in Ottawa, on Thursday, March 19, 2020. She has announced an independent inquiry into why Canada's respected pandemic early warning agency was shut down last year. The Auditor-General is also investigating separately (THE CANADIAN PRESS/Justin Tang)

In the late 1990’s  Canada created an agency in collaboration with the World Health Organisation to act as an early warning system for pandemics and other major health outbreaks.

With a multilingual staff, it monitored a variety of sources to detect problems even when countries tried to play down or hide such major health problems. With its multilingual capacity, the experts would scour social media posts, news items, medical research papers, blogs and other often obscure sources for scraps of information that could indicate a growing problem almost anywhere in the world and provide an early warning.

The Global Public Health Network (GPHIN) according to the website “tracks events such as disease outbreaks, infectious diseases, contaminated food and water, bioterrorism and exposure to chemicals, natural disasters, and issues related to the safety of products, drugs and medical devices and radioactive agents”.

Operating within the Public Health Agency of Canada,  the Globe and Mail reports that the WHO called the group a “cornerstone” of global pandemic preparedness with its surveillance and alert system and that it had garnered a global reputation as a leader in early warnings of health concerns.

But during the first term of the Justin Trudeau’s Liberal government and one year before the current pandemic began sweeping the world, the GPHIN was quietly shut down and researchers moved to other functions. Scientists at Public Health and GPHIN had expressed concern that their warnings and other scientific information was not being listened to or properly understood by government officials in the health department and that they were being marginalized.

The Globe and Mail reported in July that Canada’s Auditor-General was planning to investigate why the agency was shut down after rs of issuing some 1,500 timely alerts into outbreaks like  SARS in China in 1998, MERS,  H1N1 in Mexico, bird flu in 2005 that Iran tried to hide, Zika in West Africa and ebola.

In the COVID-19 outbreak, the Liberal government did not elevate its risk rating to ‘high’ until seven weeks after the WHO declared a high risk and after evidence of human to human transmission. Even without the early warning possibility of the GPHIN, Canada’s military warned the Liberal government of the emergence of the deadly virus in China in January.

The small medical intelligence unit (MEDINT) of Canada’s military forces, performs a somewhat similar function to  that which the GPHIN was doing.

Now Liberal Health Minister, Patty Hajdu has ordered an independent review of why the GPHIN early warning system was shut down.

Hajdu says she wants the review done quickly and the experts appointed will be independent of Public Health Canada.

Public Health Canada has since restarted the alert system