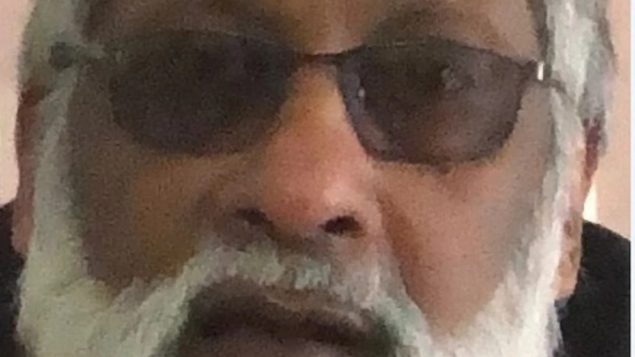 Mohamed-Aslim Zafis, 58, was sitting outside his Toronto mosque Saturday when he stabbed to death by a male attacker. Police have not said if the killing is a hate crime and the congregation is urging people not to speculate. (Toronto Police)

Congregation member stabbed to death in front of his Toronto mosque

Members of Toronto mosque say they are “saddened beyond words” following a fatal stabbing Saturday night at the building’s entrance.

Mohamed-Aslim Zafis, 58, was working as a volunteer controlling access to the mosque in rhe Etobicoke area to ensure COVID-19 health regulations were being met, when a man approached him and stabbed him once in the neck and then ran away.

By the time paramedics and police arrived, Zafis was dead.

Police describe the suspect as a slim male wearing a black hoodie.

Police have not confirmed whether the killing is a hate crime and the congregation is urging people not to speculate. 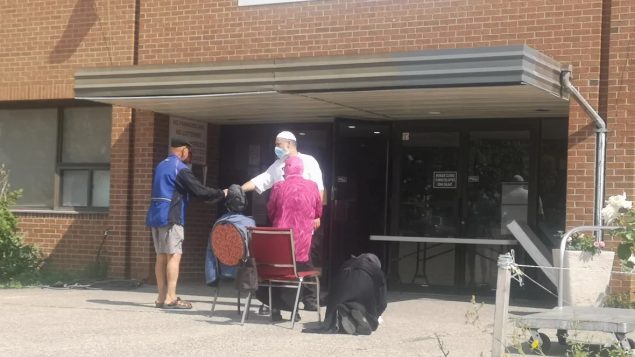 Members of the International Muslim Organization mosque and the Imam, Ayman Tahir, pray and comforted each other at the spot where the victim was killed. (Kelda Yuen/CBC)

“There are no words for what happened to the member of this congregation,” the National Council of Canadian Muslims said in a statement issued on behalf of the International Muslim Organization (IMO) mosque, located at 65 Rexdale Blvd., near Islington Avenue,

“We further encourage our community not to speculate on what happened as the investigation is ongoing, ” the statement said.

“Instead, we ask that you keep our brother and his family in your prayers.”

“We know that many of us are saddened beyond words, and are afraid and worried after such an act of violence struck so close to home.”

Ayman Tahir, Imam at the IMO mosque, was inside when he heard that Zafis was on the ground outside.

“We rushed outside to find out what happened to him. We found the blood all over the place,” he said.

“We don’t know anything. The community is in shock, in grief, and in denial. We’re waiting for the police investigations.”

Some members of the mosque expressed shock at the stabbing. 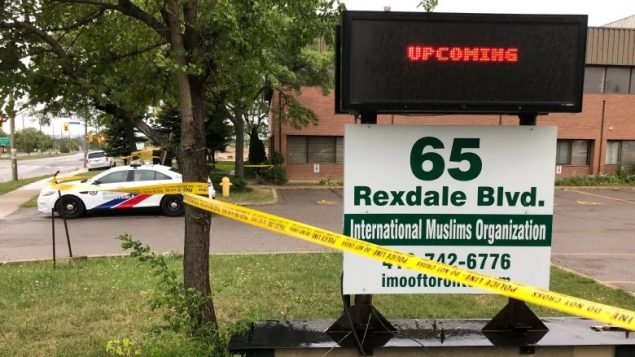 Toronto police taped off the International Muslim Organization mosque after the fatal stabbing. The organization said it was ‘deeply saddened and shocked’ to learn about the ‘tragic incident.’ (Robert Krbavac/CBC)

“From what I know, ever since I’ve been going there, something like this has never happened. There’s never been any acts of violence in that mosque or even outside that mosque,” said Shehroz Shabbir, a long-time member, told CBC News on Sunday.

“Ever since I could remember, I would see him. He spoke different languages. He treated everyone very kindly,” Shabbir said.

“This is where people come to find peace and prosperity,” he said.

“For something like this to happen there, this very sad.”

“He’s such a nice person. Very kind and nice.”

The attack will–no doubt–will rekindle memories for Canadians of a desolate Sunday evening in the winter of 2017, when a lone gunman, Alexandre Bissonnette, entered the Islamic Cultural Centre of Quebec City, on Jan. 29, armed with a semi-automatic shortly after the end of evening prayers.

Fifty-three persons were reported in the building at the time.

Bissonnette fled the scene in a car.

Around 20 minutes later he phoned 911 and turned himself over to police.

Bissonnette pleaded guilty to killing six men and in February, 2019 he was sentenced to life in prison without possibility of parole for 40 years.