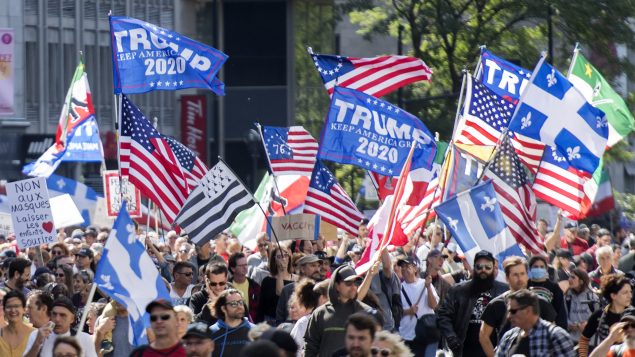 American flags and placards supporting U.S. President Donald Trump were prominent at a demonstration in Montreal Saturday opposing the mandatory wearing of face masks. A recent poll showed that slightly less than 20 per cent of Canadians are unhappy with mask rules and social distancing to fight COVID-19. (THE CANADIAN PRESS/Graham Hughes)

Demonstrators take to the streets in Montreal and in Ottawa

As new provincial regulations–and fines of up to $6,000 for those who ignore rules about wearing masks indoors–took effect on Saturday, an eclectic group of several thousand demonstrators took to the streets of Montreal to protest.

Others held signs about the 5G internet network, or perceived corruption at the United Nations.

The most popular symbols at the protest belonged to QAnon, a far-right conspiracy theory in the United States that claims a satanic, pedophile cabal secretly controls the U.S. government, if not the entire world, according to Montpetit and MacFarlane

The march began near Premier François Legault’s office near the McGill University campus and ended with a rally outside the Radio-Canada building at Boul. René Lévesque Boulevard and Papineau Ave, where speakers accused Legault’s government of lying about the dangers of the COVID-19 and overreacting. 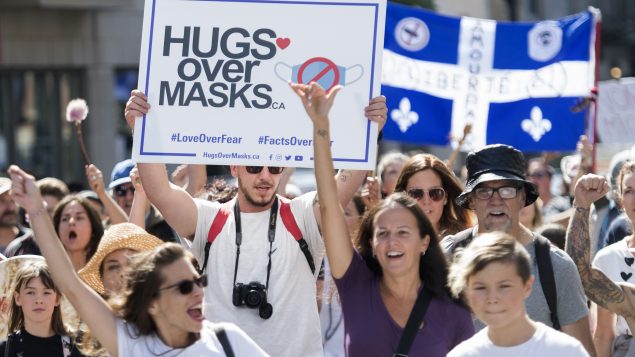 Some of the demonstrators at Saturday’s anti-mask rally in Montreal. (THE CANADIAN PRESS/Graham Hughes)

Saturday’s protest followed a similar one in August that also drew thousands.

A recent poll by the non-profit Angus Reid Institute suggested that about 18 per cent of the Canadian public didn’t like the way health officials and political leaders have handled the pandemic and has expanded social interactions and ignored advice on physical distancing, hand washing and mask wearing.

Meanwhile, demonstrators involved in a long-running potential hot-button issue made their way to Parliament Hill on Saturday.

Under the banner of the Canadian Coalition for Firearm Rights, pro-gun activists said they were protesting the “injustice and ineffectiveness” of the federal government’s assault weapon ban.

The organization did not respond to a request for comment from The Canadian Press but said on its website the event was aimed at showing Canadians that gun owners are “your friends, colleagues and neighbours.” 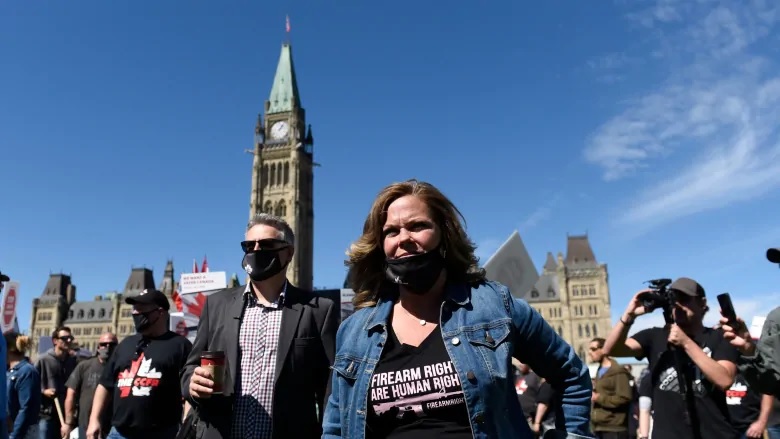 Tracey Wilson and Rod Giltaca of the Canadian Coalition for Firearm Rights begin a march against the federal government’s new gun regulations on Parliament Hill on Saturday. (THE CANADIAN PRESS/Justin Tang)

In May, the Liberal Government announced a ban on some 1,500 makes and models of military-grade “assault-style” weapons in Canada.

Last week, Conservative MP Michelle Rempel Garner, who represents an Alberta riding, told the CBC’s Joel Dryden she has a parliamentary e-petition that calls on Prime Minister Justin Trudeau to immediately scrap his “firearms confiscation regime,” calling it “undemocratically imposed without debate during a pandemic while Parliament is suspended, [and] an assault on Canadian democracy.”

Rempel Garner said the petition has been certified with more than 230,000 signatures — the most on the online platform since it was introduced in 2015.

With files from CBC News, The Canadian Press. RCI