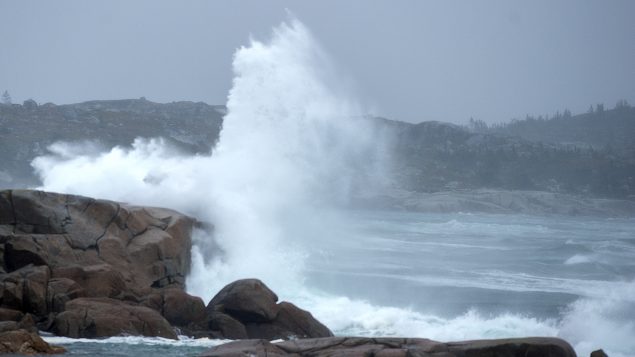 Canada’s Atlantic provinces are bracing for the arrival of Hurricane Teddy, which will lose some of its fury by the time it makes landfall on Wednesday but is still expected to batter the Maritimes with heavy rain, winds and storm surges.

According to the Canadian Hurricane Centre of Environment Canada, as of 9 a.m. AT on Tuesday, Teddy was still a Category 2 hurricane with sustained wind speeds of 165 km/h.

It is expected to rapidly weaken and come ashore, somewhere between Halifax and Cape Breton, early Wednesday morning as a post-tropical storm.

Environment Canada has also issued a rainfall warning and a tropical storm watch for P.E.I. in advance of the storm. 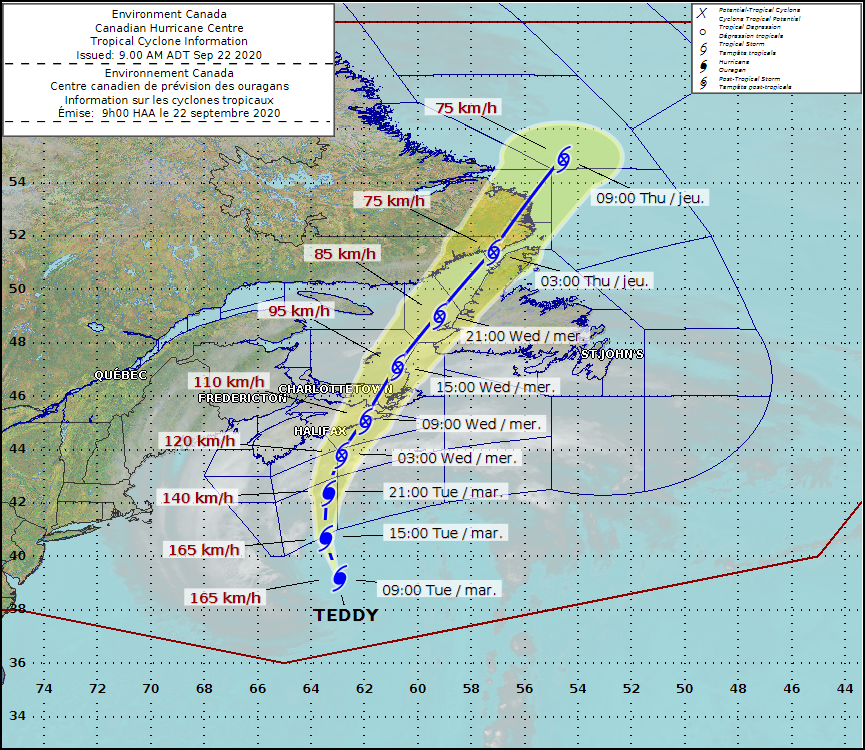 Teddy’s forecast track as of 9 a.m. AT on Tuesday. (Canadian Hurricane Centre)

On Wednesday, post-tropical Teddy will turn northeastward and travel across eastern Nova Scotia in the morning then weaken as it moves into the Gulf of St. Lawrence, Environment Canada warned.

“This is going to be a wild ride for us,” said CBC meteorologist Tina Simpkin. “This starts this afternoon and doesn’t really finish up until about tomorrow late in the day. So that’s about a 24-hour period, which leaves us vulnerable to heavy wind as well as heavy rain and some really high tides.”

“Wind and Tropical Storm warnings are in effect for the Atlantic coastline of Nova Scotia from Digby to Cape Breton, where wind gusts of 80 to 100 km/h are expected today,” the agency warned Tuesday. 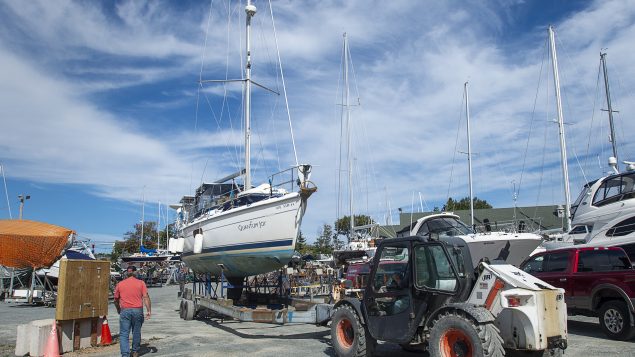 A sailboat is moved into the yard after being pulled from the water at the Dartmouth Yacht Club in Dartmouth, N.S., on Monday, Sept. 21, 2020. Hurricane Teddy is expected to impact the Atlantic region starting mid-day Tuesday as a post-tropical storm, bringing rain, wind and high waves. (Andrew Vaughan/THE CANADIAN PRESS)

Rainfall warnings are in effect for all of Nova Scotia except western most regions, and for Prince Edward Island.

Storm surge warnings are also in effect along the Atlantic coast of Nova Scotia from Yarmouth County through to eastern Cape Breton County.

“Large swells will continue to build toward the Atlantic coast today, with the highest waves expected to reach the Atlantic coast later today into Wednesday morning,” the agency said, warning that waves of up to 8 to 10 metres are expected.

“The highest risk is the combination of the very large waves combining with the storm surge to cause dangerous conditions along the Atlantic coasts of Nova Scotia and Newfoundland.”

Rough and pounding surf, localised flooding and coastal infrastructure damage and erosion are likely in vulnerable areas, even outside of the times of high tide, it added.

The storm warnings have already led to several cancellations.