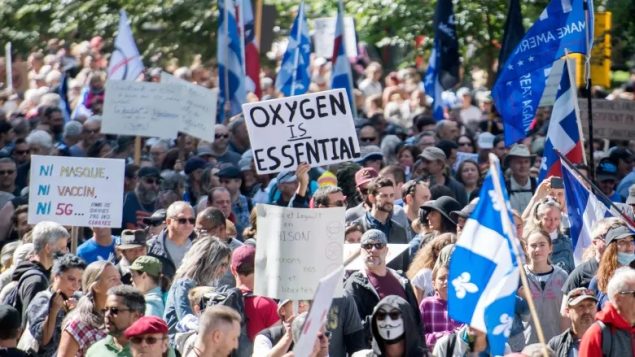 Some demonstrators in Montreal on Sept. 12 carried signs and wore T-shirts and hats denouncing what they called fear campaigns by the Quebec government, suggesting that the danger of COVID-19 has been overstated. A new poll suggests the anti-mask demonstrators do not have a lot of support from the Canadian public. (THE CANADIAN PRESS/Graham Hughes)

As COVID-19 cases mount across the country, a new poll suggests that a vast majority of Canadians don’t support anti-mask demonstrations calling on governments to back off on mandating public health measures.

It also suggests that Canadians are far less divided on the issue than Americans, where the wearing of masks has become a political lightning rod as President Donald Trump seeks re-election.

The online survey by Léger and the Association for Canadian Studies found 88 per cent of respondents in Canada said they opposed the demonstrations while 12 per cent supported them.

(Among Americans, the number (31%) who support the protests was nearly triple that.) 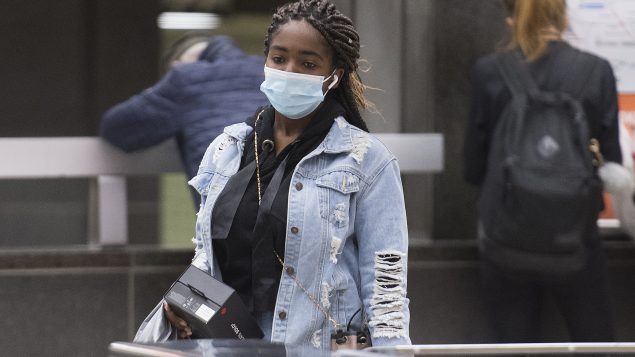 A woman wears a face mask as she walks through a metro station in Montreal on Saturday. A poll released today found that 83 per cent of Canadian respondents feel governments should order people to wear a mask in all indoor public spaces–a 16 per cent increase from July. (THE CANADIAN PRESS/Graham Hughes)

As well, 21 per cent of Canadian respondents felt being told to wear a mask was an infringement on personal freedoms–a decline of six per cent from July.

(Forty-three per cent of Americans polled said it was.)

“In a way, again, the anti-maskers are a minority and not a growing minority in Canada,” says Léger executive vice-president Christian Bourque.

The poll, released today, found that 83 per cent of Canadian respondents feel governments should order people to wear a mask in all indoor public spaces.

That’s a 16 per cent increase from July when the virus appeared to be on the wane.

Even more respondents–87 per cent–said  wearing a mask was a civic duty because it protects others from COVID-19.

Fears of contracting the novel coronavirus continue to grow in Canada.

Sixty-one per cent of respondents worried about catching the illness that has infected more than 145,000 persons and killed more than 9,200.

That compares to 51 per cent in mid-June.

Two-thirds of the Canadians polled said they believed it is likely Canada will enter another lockdown in the next three months, while 83 per cent thought the country would experience a second wave of COVID-19 — three per cent more than last week.

Fifty per cent of Canadians and 34 per cent of Americans told the poll they believed the worst of the crisis is yet to come. 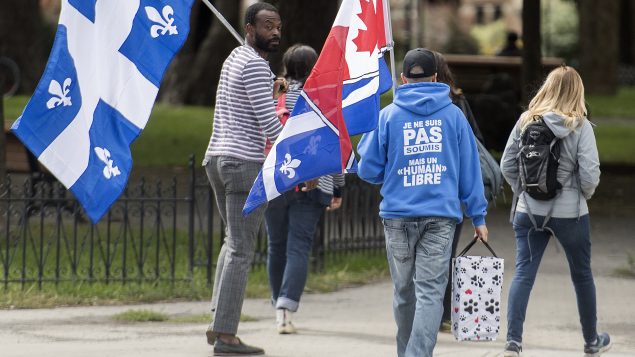 People attend a demonstration opposing the mandatory wearing of face masks and coverings in Montreal last Saturday. Eighty-eight per cent of respondents in Canada said they opposed the demonstrations while 12 per cent supported them.
(THE CANADIAN PRESS/Graham Hughes)

It follows one last week by Léger and the Association for Canadian Studies that found almost a quarter of Canadians believed warnings from public officials and medical experts were overblown and that about 57 per cent of respondents said they had eased their adherence to one or more of public health measures over the previous month.

This week’s poll notes that in the past month, 63 per cent of Canadians (and 68 per cent of Americans) reported that they have relaxed in terms of following one or more of the public health safety measures.

With files from The Canadian Press (Lee Berthiaume)