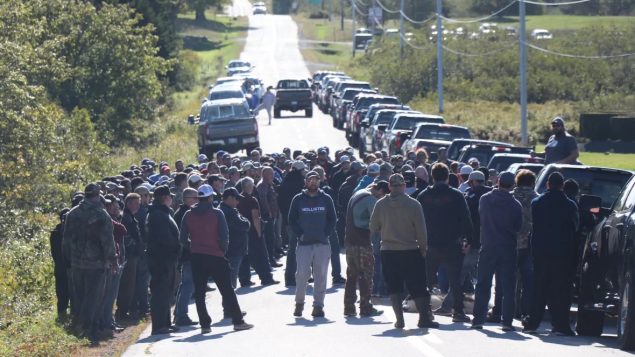 On Monday, non-indigenous fishers changed tactics from protests andfacing off against Indigenous fishers at the wharf to protesting outside the house of someone in Comeauville, N.S. whom they claim is a commercial scale buyer of the Indigenous catch (Jeorge Sadi/CBC)

A decades old dispute in the Maritime provinces has boiled over again this month in Nova Scotia. The dispute is over an Indigenous commercial lobster fishery while the season is closed to non-Indigenous fishermen.

Last week a Mi’kmaw band in southwestern Nova Scotia issued their own licences to carry out a small commercial fishery in St Mary’s Bay. Such licences are granted only by the federal Fisheries and Oceans Canada ministry (DFO).

The dispute over fishing righst has been on an of over two decades. Red balloon indicates Saulnierville and nearby Weymouth on St Mary’s Bay, N.S. where the latest flare up is occurring ( google)

The Mi’kmaw say they have a treaty right confirmed by the Supreme Court (SCC) in September 1999 to carry out not only a food and ceremonial fishery as they wish, but also to earn a ‘moderate livelihood’ from hunting or fishing. They say this means anytime they want.

Commercial fishers say the federally regulated lobster season is closed in summer to allow molting (change of shell) and mating in order to conserve the lobster stock.  The season only starts on the last Monday of November each year and ends on May 31.

While the Supreme Court upheld Indigenous rights to hunt and fish, with R v Marshall, the term ‘moderate livelihood’ is not defined and as such is in contention. A subsequent SCC decision in November 1999 stated the indigenous right is not absolute and stated in part

“The federal and provincial governments have the authority within their respective legislative fields to regulate the exercise of a treaty right where justified on conservation or other grounds.  The Marshall judgment referred to the Court’s principal pronouncements on the various grounds on which the exercise of treaty rights may be regulated.  The paramount regulatory objective is conservation and responsibility for it is placed squarely on the minister responsible and not on the aboriginal or non‑aboriginal users of the resource.”

Following that decision, the federal government spent millions of dollars buying commercial licences and giving them to Indigenous communities along with funding for training and equipment purchases. 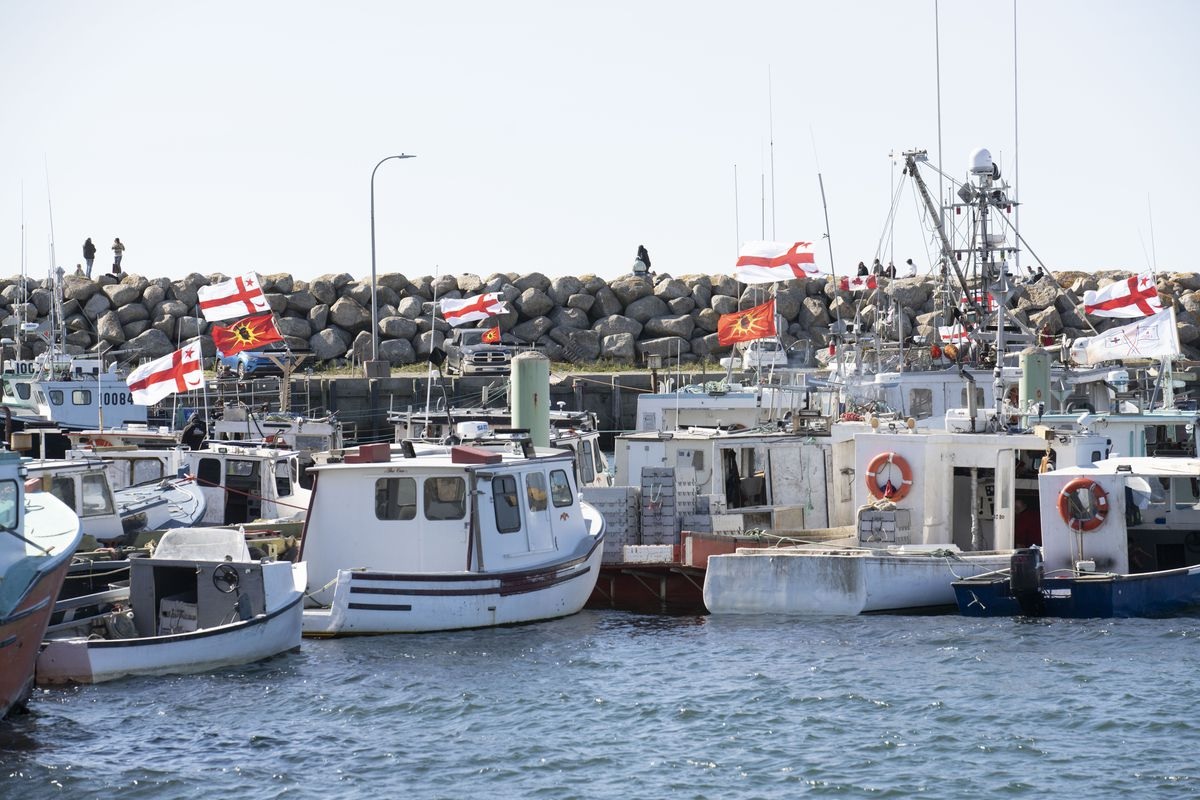 Colin Sproul, president of the Bay of Fundy Inshore Fishermen’s Association, said they don’t dispute Indigenous rights to fish, but they should respect the rules, adding that in some cases Indigenous communities have leased the licences back to non-Indigenous fishers cutting their own people out the industry.

Both sides have called on the Liberal government to enforce the law. Both sides also blame the government for inaction. Quoted by the Canadian Press Rhonda Knockwood, director of operations for Sipekne’katik First Nation, said the tensions are the result of the years of frustration with the DFO and its “deliberate dithering and underhanded tactics surrounding the negotiations to define a moderate livelihood and implementation of the treaties.” 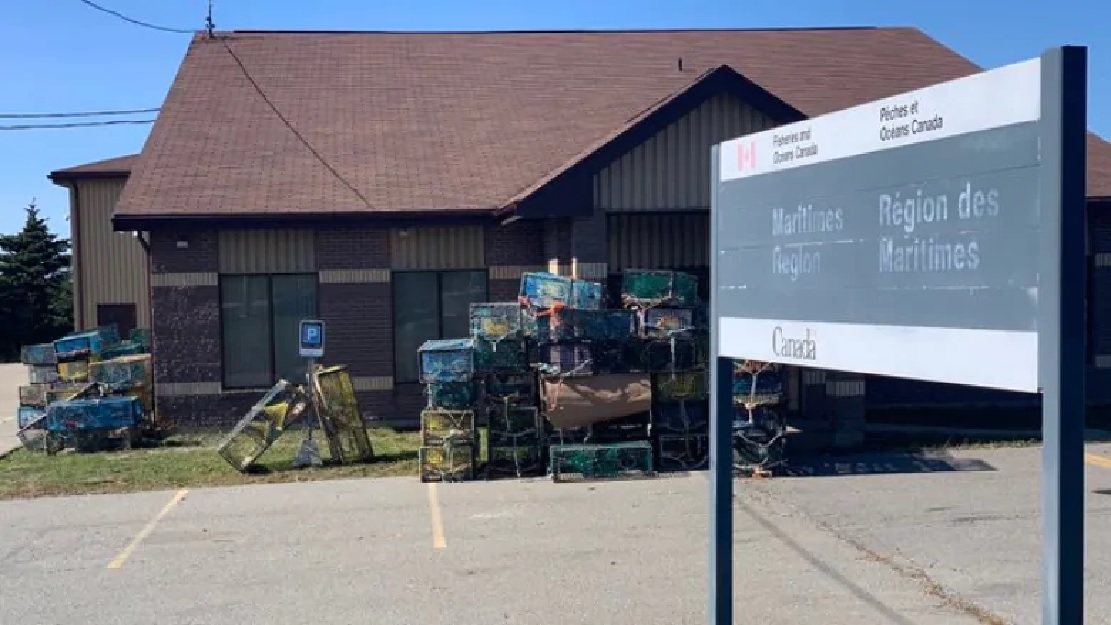 Commercial fishermen dumped about 100 Mi’kmaw traps at the Department of Fisheries and Oceans office in Meteghan, N.S., on Monday afternoon, which they say violate federal regulations. (Taryn Grant/CBC)

Mi’kmaw chiefs met with federal Fisheries Minister Bernadette Jordan and Indigenous Relations Minister Carolyn Bennett on Monday after commercial fishermen pulled up  some 350 of the Sipekne’katik traps and dumped many of them in front of a DFO office. The non-Indigenous fishers say the fact the police did not stop them removing the traps shows the action was lawful in removing the ‘illegal’ traps.

The ministers issued a joint statement after the meeting which said in part, “We thank the Assembly of Nova Scotia Mi’kmaw Chiefs for their leadership and for the open, respectful and constructive conversation today, where we affirmed what the Marshall Decision declared over 20 years ago – that Mi’kmaw have a constitutionally protected treaty right to fish in pursuit of a moderate livelihood. We share the concerns of the Assembly Chiefs for the safety of their people. There is no place for the threats, intimidation, or vandalism that we have witnessed in South West Nova Scotia. This is unacceptable”. 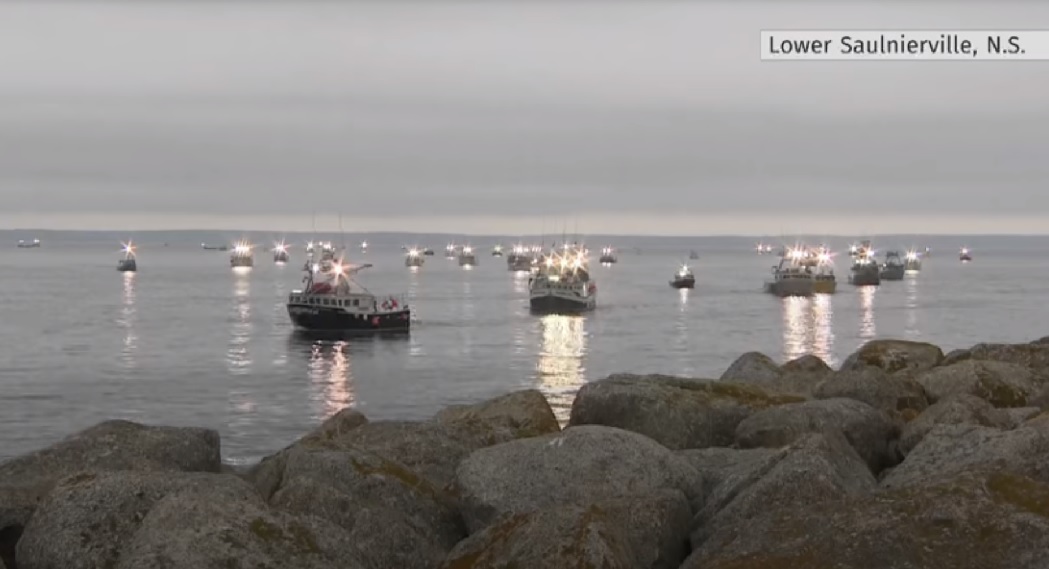 Non-Indigenous fishers brought their boats to the harbour where Indigenous boats were about to set traps. They later apparently pulled up those traps and took them to a DFO office saying the fishing was out of season and illegal. (CBC News)

The provincial premier, Stephen McNeil, also issued a statement saying the province recognizes Indigenous rights but added that many of the details surrounding the nature and extent of those rights are not clear.

All sides are calling for dialogue, but there may a delay as the region prepares for the arrival of Hurricane Teddy which will begin affecting Nova Scotia today.