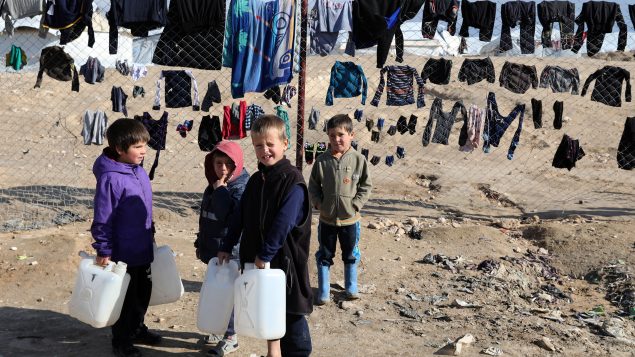 Children hold onto water containers in al-Hol camp, Syria, Jan. 8, 2020. Human Rights Watch says 25 Canadian children, most under the age of six, are being held in the camp in appalling conditions. (Goran Tomasevic /REUTERS)

A five-year-old orphaned Canadian girl is on her way to Canada to be reunited with her extended family after spending nearly two years in a crowded refugee camp in northeastern Syria, Foreign Affairs Minister Francois-Philippe Champagne announced Monday.

“I am pleased that this Canadian child orphaned in Syria will soon be united with extended family in Canada,” Champagne said in a statement.

“Global Affairs Canada has been actively engaged in this case since first learning of the child’s exceptional circumstances. The focus is now on protecting the child’s privacy and ensuring that the child receives the support and care needed to begin a new life here in Canada.”

Champagne also thanked the Department of National Defence and the Canadian Armed Forces for their “valuable support during this process.”

Citing the need for operational security and protecting the child’s privacy, federal officials refused to release any additional information about how the little girl was brought out of the Kurdish controlled areas of northeast Syria and the timing of her expected arrival in Canada.

‘There are 46 other Canadians’ 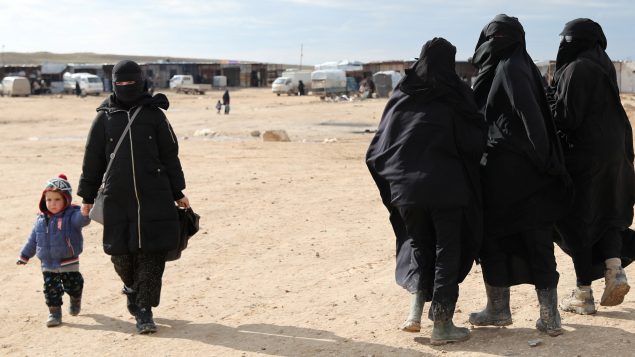 A woman holds hands with a child while walking through al-Hol camp, Syria, Jan. 8, 2020. (Goran Tomasevic/REUTERS)

The little girl was found on the side of a road last year after her parents and three siblings were killed in the last battle to destroy ISIS in northeast Syria. Since then, her uncle has campaigned to have her repatriated to Canada while she was being held in a squalid camp for families associated with ISIS.

Farida Deif, Canada director of Human Rights Watch, said while she was delighted by the news of the little girl’s repatriation to Canada, it doesn’t absolve the federal government of its responsibility to bring home all of its detained nationals in northeast Syria.

“There are 46 other Canadians, including 25 children most of whom are under the age of six, whose lives remain on the line, who remain detained in overcrowded, filthy and life-threatening conditions in northeast Syria, made even more life-threatening with the risks posed by the COVID pandemic,” Deif said.

Kurdish authorities who control this area of northeast Syria have urged Western governments to take all of their citizens back.

None of the Canadians have been charged with any crime, or even brought before a judge to review the legality and necessity of their detention, according to Human Rights Watch.

A question of political will 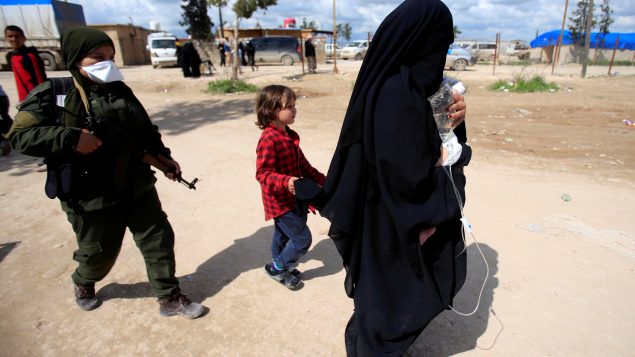 A fighter of the Syrian Democratic Forces (SDF) walks with the wife of an Islamic State militant holding her sick baby at al-Hol displacement camp in Hasaka governorate, Syria, Apr. 1, 2019. (Ali Hashisho/REUTERS)

The Canadians are among nearly 14,000 non-Iraqi foreigners from more than 60 countries held in northeast Syria for suspected ISIS links.

Deif questioned, however, whether the Liberal government has the political will to resolve this thorny issue.

“Obviously this is a group of detainees who have alleged ties to ISIS and for many governments this may not be a popular or sympathetic group of individuals to repatriate, so Canada has been reluctant to repatriate any adults or really to take any concrete action to ease the suffering of adults who are detained in northeast Syria,” Deif said.

Canada is not alone in turning a blind eye on its citizens detained in camps in northeast Syria, however, international law is clear, she added.

“All detained nationals should be returned to their home countries for rehabilitation, reintegration and prosecution in Canadian courts if warranted,” Deif said.

“If these are individuals who have committed crimes, including international crimes, they should be prosecuted in Canadian courts, they shouldn’t be left in indefinite, arbitrary detention in these squalid camps and prisons in northeast Syria. That’s not a solution.”

Speaking to reporters on Monday, Prime Minister Justin Trudeau said the repatriation of the little girl “was an exceptional case.”

Trudeau refused to say whether the federal government has any plans to bring back the remaining Canadians.