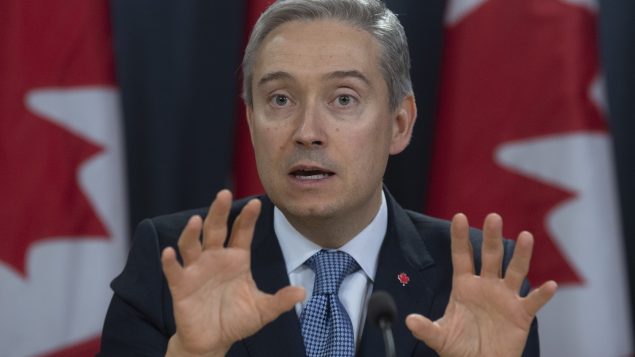 ‘Stay out’ of the Nagorno-Karabakh conflict, Canada tells Turkey

Foreign Affairs Minister Francois-Philippe Champagne said today he told his Turkish counterpart that Ankara should “stay out” of the Nagorno-Karabakh conflict between Armenia and Azerbaijan.

Speaking to reporters on Friday prior to embarking on a week-long European tour to discuss the ongoing bloodshed in Nagorno-Karabakh and tensions between Greece and Turkey in the Eastern Mediterranean, Champagne said he had a “firm conversation” with Turkish Foreign Affairs Minister Mevlut Cavusoglu.

“The message was very clear that external parties should stay out because it’s already a very complex situation,” Champagne said.

“We deplore the loss of life and we need to make sure that no one is fuelling the conflict. Quite the opposite, the international community needs to be united in calling the parties back to the negotiating table, [to] respect the ceasefire and protect civilians.”

The latest outburst of fighting between Azerbaijani and Armenian forces began Sept. 27 and marked the biggest escalation of the decades-old conflict over Nagorno-Karabakh. The region lies in Azerbaijan but has been under the control of ethnic Armenian forces backed by Armenia since a Russian-backed ceasefire in 1994.

Armenia said it’s open to holding a ceasefire, while Azerbaijan has made a potential truce conditional on the Armenian forces’ withdrawal from Nagorno-Karabakh, arguing that the failure of international efforts to negotiate a settlement left it no other choice but to try to reclaim its lands by force.

Champagne said he asked his Turkish counterpart to use his influence to convince Azerbaijan to return to the negotiating table without any preconditions.

Champagne said Cavusoglu agreed with him “that there is no military solution to this conflict.”

But in a televised address to the nation on Friday, Azerbaijani President Ilham Aliyev dismissed such statements, saying that nearly three decades of international talks “haven’t yielded an inch of progress, we haven’t been given back an inch of the occupied lands.”

“Mediators and leaders of some international organizations have stated that there is no military solution to the conflict,” Aliyev said. “I have disagreed with the thesis, and I have been right. The conflict is now being settled by military means and political means will come next.”

Champagne said he “deplores” any suggestion that the use of force is the best way to resolve the Nagorno-Karabakh conflict.

“Quite the opposite, we’re calling on the parties to respect the ceasefire, to protect civilians to cease the hostilities,” Champagne said. “Conflicts are resolved around the negotiating table, not on the battlefield.”

Last week, Champagne suspended the export of sophisticated Canadian drone technology to Turkey in response to allegations that it is being used by the Azerbaijani military against Armenian forces in Nagorno-Karabakh.

Turkey has denied transferring arms or military personnel or jihadist mercenaries to Azerbaijan, though Cavusoglu has pledged to be at Baku’s side both “on the battlefield and at the negotiating table.”

Disarmament group Project Ploughshares has argued that Canadian exports of drone technology to Turkey breach not only Canadian legislation but also its international commitments under the UN Arms Trade Treaty.

“We will continue to have a very thorough investigation because Canada has one of the most robust export regimes in the world,” Champagne said. “And I intend to respect not only the letter of the law but the spirit.”

Champagne said he will travel to Greece, Austria, Belgium and Lithuania for a series of meetings with the political leadership of these countries, as well as top European Union and NATO officials.

Champagne said the first stop of his whirlwind tour of Europe will be Greece, where he will meet with Prime Minister Kyriakos Mitsotakis and Foreign Affairs Minister Nikos Dendias.

“This is going to be a very important bilateral visit,” Champagne said. “I’m told that the last one occurred some 20 years ago.”

The two sides will be discussing the dispute between Turkey and Greece over maritime rights in the Eastern Mediterranean, he said.

“Canada has been engaged since the beginning, engaging with other partners through NATO in particular to try to see how we can deescalate,” Champagne said.

Then it’s off to Vienna for a series of meetings at the Organization for Security and Co-operation in Europe (OSCE) headquartered in the Austrian capital.

The OSCE plays an important role in finding a negotiated solution to the decades-long Nagorno-Karabakh conflict through its Minsk Group mechanism, as well as in the recent crisis in Belarus, Champagne said.

In Vienna, Champagne will also meet with his Austrian counterpart, Alexander Schallenberg.

Then Canada’s top diplomat will be flying to Brussels for a series of meetings with NATO Secretary General Jens Stoltenberg.

Discussions with Stoltenberg will focus on the security situation in Europe and around the world, Champagne said.

Also in Brussels, Champagne will meet with the EU’s High Representative for Foreign Affairs and Security Policy and Vice President of the European Commission, Josep Borrell.

“You’ve seen that Canada has been engaging more and more with the European Union, doing joint statements, standing up and speaking up for human rights, for democracy, for media freedom,” Champagne said.

Canada wants to strengthen that alliance with the EU based on shared values and principles, Champagne siad.

“And that will give us the opportunity to talk obviously about the Eastern Mediterranean, the conflict in Nagorno-Karabakh, issues in Belarus and a broader discussion around China as well,” Champagne said. 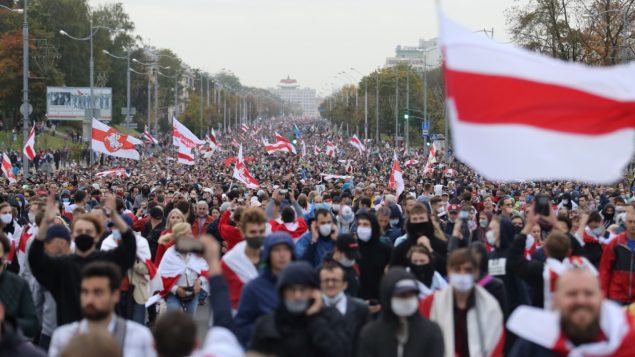 Then Champagne will be moving on to the Lithuanian capital of Vilnius, where he will hold a “mini-summit” with his counterparts from Lithuania, Latvia and Estonia.

While in Vilnius, Minister Champagne will also be meeting with Belarusian opposition leader Svetlana Tikhanovskaya, who fled to Lithuania after the disputed Aug. 9 presidential election in Belarus and the violent crackdown by President Alexander Lukashenko, who claimed a landslide win in the polls.

Canada has refused to recognize Lukashenko’s victory and his subsequent inauguration and has slapped sanctions on him, his eldest son and 12 other Belarusian officials Canada accuses of being involved in rigging the election results and ordering the violent crackdown on tens of thousands of protesters.

Champagne will leave for Europe on Sunday and return back to Canada on Saturday.