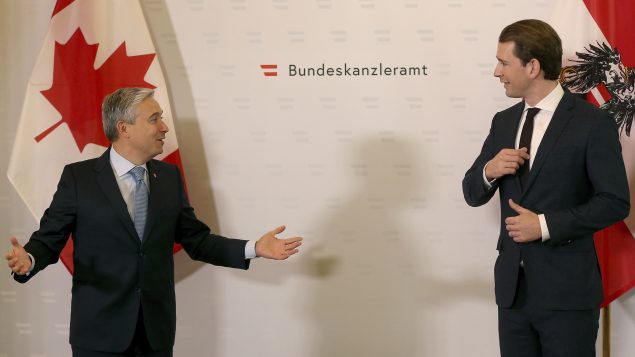 Champagne discusses Nagorno-Karabakh, Belarus and Ukraine in meetings in Vienna

Foreign Affairs Minister François-Philippe Champagne was in Vienna today for meetings with officials of various international organizations and Austrian leaders to talk about flashpoints in Europe and Azerbaijan.

Champagne arrived in Austria from Greece as part of his week-long tour of European capitals to discuss with allies the tensions in the Eastern Mediterranean, the war between Azerbaijan and Armenian forces in Nagorno-Karabakh and the situation in Belarus and Ukraine.

Champagne held meetings at the Organization for Security and Co-operation in Europe (OSCE) and the International Atomic Energy Agency (IAEA).

“It’s all about security today – Nagorno-Karabakh, the issue in Belarus, Ukraine obviously,” Champagne said in a brief video posted on his Twitter account.

The OSCE plays an important role in the search for a negotiated solution to the decades-long Nagorno-Karabakh conflict through its Minsk Group mechanism, as well dealing with the situation in Belarus and ending the war in eastern Ukraine.

Champagne said he held meetings at the OSCE with the U.S., Swedish, Albanian and French ambassadors and was also expected to meet with Austrian Chancellor Sebastian Kurz and Foreign Affairs Minister Alexander Schallenberg.

Canada and its NATO and European allies are increasingly worried about the impact of Turkey’s dispute with Greece in the Eastern Mediterranean and Ankara’s involvement in the Nagorno–Karabakh conflict — which has the potential to draw the rest of the North Atlantic alliance into a military conflict with Russia in the Southern Caucasus. 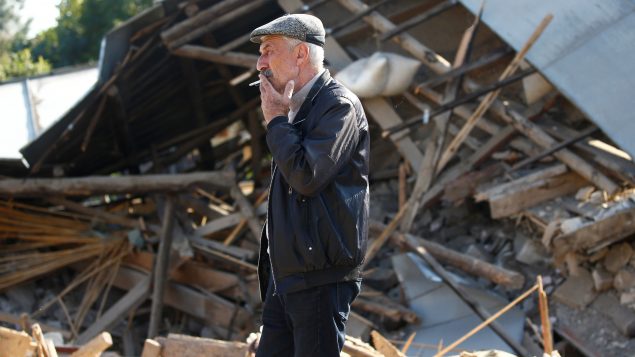 A man smokes as he stands next to a building damaged by recent shelling during the military conflict over the breakaway region of Nagorno-Karabakh, in the town of Martuni on Oct. 14, 2020. (REUTERS)

Despite diplomatic efforts to stop hostilities in Nagorno-Karabakh, fighting between Azerbaijani and Armenian forces continued for the 18th straight day as both sides exchanged accusations and claims of new attacks over the breakaway Armenian-populated territory.

Nagorno–Karabakh lies inside Azerbaijan but has been under the control of its ethnic Armenian population, which voted in December of 1991 to break away from Azerbaijan. Azerbaijani authorities never recognized the results of the referendum and their attempts to regain the region by force were defeated by local Armenian forces backed by Armenia.

As a result of the war, which ended with a Russian-brokered ceasefire in 1994, Armenian forces also captured seven districts of Azerbaijani territory that are outside of the Armenian-populated region. The war in the 1990s resulted in nearly 30,000 dead and about 1 million refugees.

Russia brokered a truce on Oct. 9 to end the latest round of fighting and allow Armenian and Azerbaijani forces to collect their dead, exchange prisoners and begin negotiations on resolving the decades-long conflict. But it never took hold. 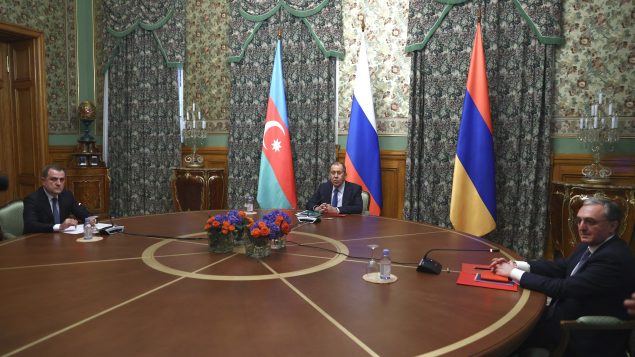 Russian President Vladimir Putin spoke by phone with his Turkish counterpart Recep Tayyip Erdogan on Wednesday, emphasizing the need to respect the truce that was violated immediately after taking effect Saturday.

Putin also voiced concern about the involvement in the conflict by militants from the Middle East — a reference to Turkey deploying pro-Turkish Syrian jihadist fighters to combat Armenian forces in Nagorno-Karabakh.

Moscow is increasingly concerned about the presence of Syrian jihadist fighters in Azerbaijan, which borders Russia’s restive Dagestan region in the eastern Caucasus Mountains.

Erdogan denied the deployment of combatants to the region in separate comments, but a Syrian war monitor and Syria-based opposition activists have confirmed that Turkey has sent hundreds of Syrian opposition fighters to Nagorno-Karabakh.

In a further sign that the conflict was widening, Azerbaijan’s military said it destroyed an Armenian missile system on the territory of Armenia proper that was allegedly positioned to target civilian areas.

Armenia’s Defence Ministry responded by stating that it reserves the right to target Azerbaijani military objects and troop movements. 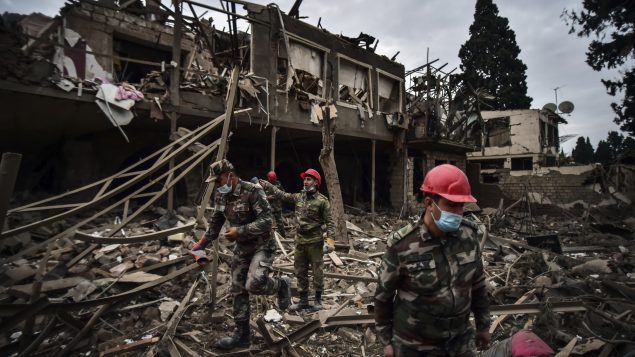 FILE – In this Oct. 11, 2020, file photo, Azerbaijani soldiers and firefighters search for survivors after rocket fire overnight by Armenian forces in a residential area in Ganja, Azerbaijan’s second-largest city, near the border with Armenia. (Ismail Coskun/IHA via AP, File)

So far, Armenia and Azerbaijan have denied targeting each other’s territory in the fighting over Nagorno-Karabakh, although each of the parties often contested such denials.

The threat of a wider war

An expansion of hostilities beyond Nagorno-Karabakh could trigger a dangerous escalation of the decades-old conflict.

Armenia has a mutual defence treaty with Russia, while Turkey, which has one of the largest militaries among NATO countries, has pledged to support Azerbaijan “on the battlefield and around the negotiating table” in the words of Turkish Foreign Affairs Minister Mevlut Cavusoglu.

Russia’s defence treaty with Armenia doesn’t apply to Nagorno-Karabakh, but Putin has warned Azerbaijan and Turkey that if the fighting spreads to Armenia proper, Moscow will be forced to defend its ally.

Russia, which also has good relations with Azerbaijan, has so far played the role of an honest broker, trying to get the two sides to stop fighting and resolve the decades-long dispute around the negotiating table.

Russian Foreign Minister Sergey Lavrov voiced hope for a peace deal that would see Armenian forces surrender control over the regions of Azerbaijan outside Nagorno-Karabakh, while Azerbaijan would lift its blockade of Armenia. Moscow has also offered to send in military observers to monitor the truce.

But Turkey’s unequivocal support for Azerbaijan and the worsening humanitarian situation in Nagorno-Karabakh could force the Kremlin to choose between honouring its alliance with Armenia or maintaining friendly ties with its energy-rich southern neighbour.

In a somber address to the nation on Wednesday, Armenian Prime Minister Nikol Pashinyan admitted that the outgunned and outnumbered Armenian forces have suffered some setbacks on the battlefield and accused Azerbaijan and Turkey of continuing “Turkey’s genocidal policy” toward Armenians. 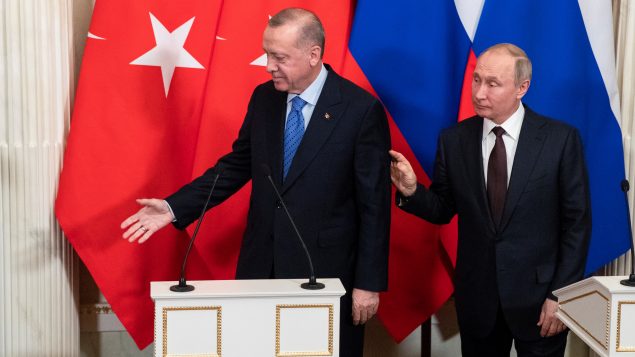 In his call with Putin, Erdogan accused Armenia of trying to make its occupation of Azerbaijan’s lands “permanent,” according to a statement from the Turkish leader’s office.

Erdogan spokesman Ibrahim Kalin said in an interview Tuesday that Ankara would favor four-way peace talks involving Russia, Turkey, Armenia and Azerbaijan. “The Minsk group is not able to produce a solution for the past 30 years. Are we to wait another 30 years? In this case we need to think of another mechanism,” Kalin said.

At the same time, Russia, which along with the U.S. and France is one of the three OSCE Minsk group co-chairs shepherding the Nagorno-Karabakh negotiations, is trying to prevent Turkey from inserting itself into the negotiating process.

Armenia too is steadfastly against Ankara playing any role in the negotiations.

Turkey’s highly visible role in the conflict has raised painful memories of the 1915 Armenian genocide in the Ottoman Empire, which Turkey denies to this day.

Champagne’s next stop is Brussels where he will meet with NATO Secretary General Jens Stoltenberg and the EU’s High Representative for Foreign Affairs and Security Policy Josep Borrell.

Champagne is also planning to meet Belgian Deputy Prime Minister Sophie Wilmes before moving on to the Lithuanian capital of Vilnius, where he will hold a “mini-summit” with his counterparts from Lithuania, Latvia and Estonia.