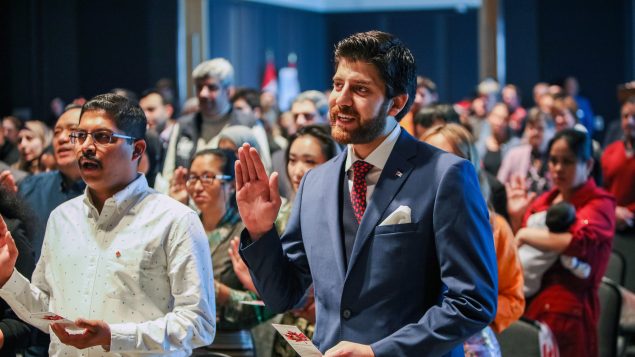 Tareq Hadhad swears allegiance at Oath of Citizenship ceremony at The Canadian Museum of Immigration at Pier 21 in Halifax on Wednesday, Jan. 15, 2020. The Liberal government proposes to amend the text of the oath to include a reference to the rights of Canada's Indigenous Peoples. (Riley Smith/THE CANADIAN PRESS)

The Liberal government has introduced legislation that would amend the citizenship oath to include a reference to the rights of Canada’s Indigenous Peoples, Immigration Minister Marco Mendicino announced Thursday.

Mendicino said the proposed changes to the oath would require an amendment to Canada’s Citizenship Act.

The proposed legislation, known as Bill C-99, stems from the government’s commitment to implement recommendations made by the Truth and Reconciliation Commission’s in its Calls to Action in 2015, particularly with the last call to action, which addressed newcomers to Canada, Mendecino said.

“The Government of Canada remains committed to walking the shared path of reconciliation with Indigenous Peoples,” Mendecino said in a statement.

“The proposed amendment to the Citizenship Act is one more vital step towards reconciliation, and demonstrates the Government’s commitment to the findings of the Truth and Reconciliation Commission.”

The new proposed language adds references to the Aboriginal and treaty rights of First Nations, Inuit and Métis Peoples, as suggested by the Call to Action number 94, and reads as follows:

“I swear (or affirm) that I will be faithful and bear true allegiance to Her Majesty Queen Elizabeth the Second, Queen of Canada, Her Heirs and Successors, and that I will faithfully observe the laws of Canada, including the Constitution, which recognizes and affirms the Aboriginal and treaty rights of First Nations, Inuit and Métis Peoples, and fulfill my duties as a Canadian citizen.”

Under Canadian law, citizenship candidates 14 years or older must take the Oath of Citizenship on the day they become Canadian. The oath is recited at a citizenship ceremony and the ceremony is the final legal step to becoming a Canadian citizen.

“With this amendment, we are changing the Oath of Citizenship to be more inclusive, and taking steps to fundamentally transform the nature of our relationship with Indigenous Peoples by encouraging new Canadians to fully appreciate and respect the significant role of Indigenous Peoples in forming Canada’s fabric and identity,” Mendicino said.

The minority Liberal government would need the support of at least one of the opposition parties to pass the legislation.

Conservative Party Shadow Minister for Immigration Raquel Dancho did not say whether her party would support the amendment, but she didn’t rule it out either.

“Canada is one of only a few countries in the world where Indigenous and treaty rights are entrenched in our Constitution,” Dancho said in a statement to Radio Canada International, adding that educating Canadians about these rights is an important part of the path to reconciliation.

“The Conservative Party supports treaty rights and the process of reconciliation with Canada’s Indigenous peoples.”

The New Democratic Party Shadow Minister for Immigration Jenny Kwan said her party has consistently called for the full implementation of the Truth and Reconciliation Commission’s Calls to Action, adding that she had tabled an amendment to revise the oath to recognize and affirm Aboriginal and treaty rights of First Nations, Inuit and Metis peoples in a previous immigration bill (Bill C-6) back in 2016.

“Sadly, those amendments were not accepted,” Kwan said in a statement to Radio Canada International.

Even though this change was to be a ‘top priority’ in the former Immigration Minister’s 2017 mandate letter, the Liberals failed to act until the dying days of the last parliament just before the 2019 election, Kwan said. As a result, the bill did not even make it to second reading, she added.

“It’s astonishing that it has taken this long for the Liberals to act. There simply is no good reason why this was not accomplished already,” Kwan said.​

“If it takes the Liberals this long to add a line in the Citizenship Oath, it is no wonder that they are failing on their nation to nation relationship with Indigenous peoples on so many levels.”