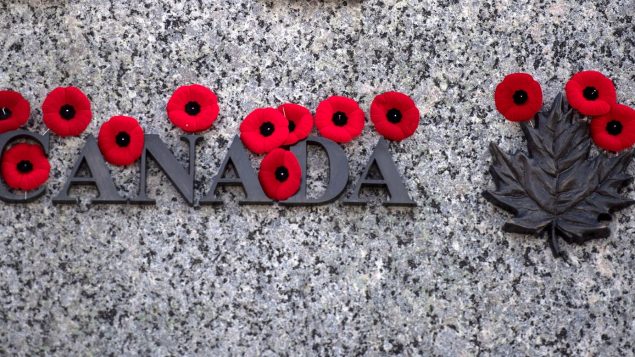 Poppies are seen on the National War Memorial after Remembrance Day ceremonies, in Ottawa on Sunday, Nov. 11, 2018. The Royal Canadian Legion partnered with the HSBC Bank Canada in order to create a safe and easy way to donate and wear poppies with new tap-enabled donation boxes. (The Canadian Press/Justin Tang)

This year Canadians are going to have a new way to donate and wear poppies during the run up to Remembrance Day on Nov. 11.

The Royal Canadian Legion partnered with the HSBC Bank Canada in order to create a safe and easy way to donate and wear poppies with new touchless HSBC “Pay Tribute” tap-enabled donation boxes, according to a news release from Wednesday.

“We are excited to present this new way to make it easier for Canadians to donate during the National Poppy Campaign,” the Dominion President of The Royal Canadian Legion, Thomas D. Irvine, said in a statement. “We are pleased to partner with HSBC Bank Canada on this innovative initiative and hope that it will grow in the years to come.”

The donation boxes will allow Canadians to make an optional $2 donation by using their tap-enabled credit cards, mobile phones and other wearable devices on the glowing poppy on the front of each box and take a poppy to wear.

This year, the Royal Canadian Legion partnered with @HSBC_CA to make it safe, secure, and easier than ever to donate & wear a poppy with touchless HSBC “Pay Tribute” tap-enabled donation boxes. Learn more about the pilot project: https://t.co/ez53BEjvoc #PayTribute #LestWeForget pic.twitter.com/Z523FzyuJs

“I can’t think of a more honourable community to support,” said Larry Tomei, executive vice president and head of wealth and personal banking at HSBC. “We’re proud to work with the Royal Canadian Legion, to help serve the veterans that served our nation at time of conflict and while maintaining peace.”

A total of 250 donation boxes are going to be distributed across Canada starting on Oct. 30.